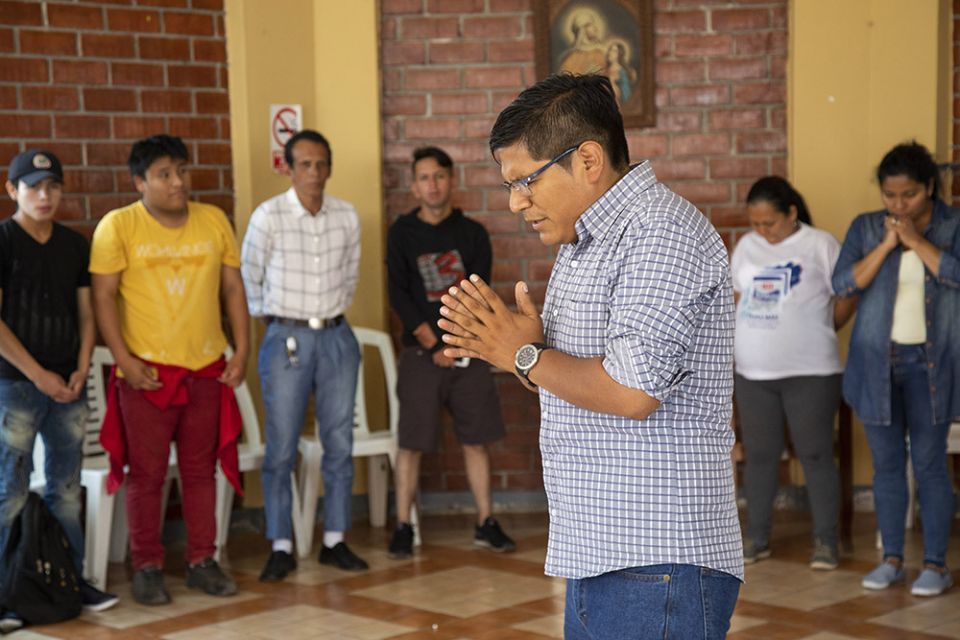 In December 2018, Abraham Luque, a catechist from the Scalabrinian Parish of Our Lady of the Perpetual Help, prays during at the Scalabrini welcome center for migrants in Lima, Peru. (CNS/Oscar Durand)

Pope Francis on May 11 promulgated Antiquum Ministerium, creating a formal, installed (instituted) ministry of catechist. The document was released with considerable Vatican fanfare, but many could be forgiven for viewing it with some skepticism as little more than a modest institutional concession within a larger ecclesiological framework that remains thoroughly clericalist and hierarchical.

After all, ordinary baptized Christians have always been the principal figures in the ministry of catechesis, and generally have had to undertake that ministry within a thoroughly clericalist paradigm that treated them as little more than priest-helpers. Does the pope's letter, issued motu proprio (on his own initiative), change this in any substantial way? The document does present some difficulties, as we will see, but I will argue that it also "moves the ball forward" toward a more adequate ecclesiological framework for church ministry.

Francis has paid relatively little attention to structural questions related to church ministry; he has been more concerned with the baptismal call to missionary discipleship. Where he has focused on ordained ministry, it has been largely to denounce clericalism and stress the need for the church's ministers to "have the smell of their sheep." This makes this recent document all the more significant.

First, read as a whole, Antiquum Ministerium moves away from the prominence given to ordained ministry in general and, in particular, to what the late Benedictine theologian Ghislain Lafont termed a "sacral priesthood." This stress on the sacrality of the priesthood and a cultic theology that supported it was particularly pronounced under the previous two pontificates.

By contrast, Francis locates the role of the installed catechist not in relation to ordained ministry, but within his broader missionary commitment to engage the world on its own terms. 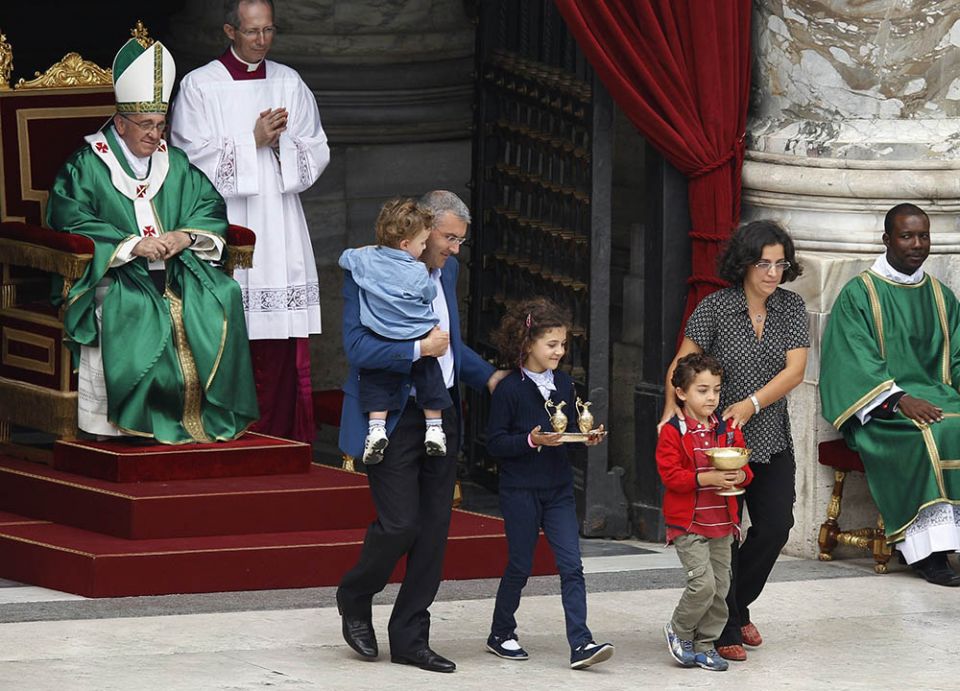 Pope Francis watches as a family carries offertory gifts to the altar during a Mass for catechists in St. Peter's Square at the Vatican in September 2013. (CNS photo/Paul Haring)

Second, the pope presents the installed ministry of the catechist as "one specific form of service among others within the Christian community." Indeed, by creating a formal, installed ministry of the catechist, Antiquum Ministerium invites us to imagine a church built up by a range of what we might speak of as "ordered" ministries, that is, formal public ministries, some constituted by sacramental ordination and others by a formal installation or commissioning.

To be sure, the document does not make this shift explicit and it continues a problematic and ecclesiologically unnecessary reliance on the lay-clergy distinction. So accustomed have we become to its employment that it is easy to forget that the lay-clergy distinction is primarily canonical in character, lacking any substantive biblical foundation. Although its continued use may be defensible in some contexts, it does not belong to the doctrinal core of church teaching on ministry.

It is worthy of note that the pope finds precedent for this kind of "installed" ministry in the earliest period of Christian ministerial practice, a period that predates the distinction between laity and clergy. Recall that the word laikos does not even appear in the New Testament and is found only once in noncanonical literature prior to the late second century. Francis writes:

From the beginning, the Christian community was characterized by many different forms of ministry carried out by men and women who, obedient to the working of the Holy Spirit, devoted their lives to the building up of the Church. At times, the charisms that the Spirit constantly pours out on the baptized took on a visible and tangible form of immediate service to the Christian community, one recognized as an indispensable diakonia for the community.

So, in spite of the continued use of "lay" language, the pope appears to move beyond a rigid laity-clergy binary to pursue a vision of the church built up by baptismal charisms and ordered ministries — some of which are established by sacramental ordination, and others by ministerial installation.

Such "installed ministries" have their own theological integrity, require their own extended theological formation, and may be subject to, where the local churches can afford it, professional remuneration. Most importantly, they would require formal ritualization.

The significance of this last point is easily overlooked. Any public or ordered ministry is intrinsically ecclesial in character and, if it is to be viewed as something other than a clerical auxiliary, ought to be subject to both an appropriate ritual epiclesis or prayer for the assistance of the Holy Spirit and its own ritual commissioning or sending forth in public service. Indeed, Pope Francis has now called for the rapid creation of just such an installation ritual for catechists.

The category of installed ministry was first created by Pope Paul VI. In the 1972 apostolic letter Ministeria Quaedam, the pope suppressed the so called "minor orders" such as tonsure, porter and exorcist, that had been part of the medieval cursus honorum, a ministerial ladder of ecclesiastical advancement. In its place, he established the "installed" ministries of lector and acolyte that were open to the laity (but only males) and could be exercised on a stable basis.

Paul VI also invited individual episcopal conferences to create other appropriate installed ministries. It was an opportunity to dramatically expand formal church ministries beyond holy orders. However, because Ministeria Quaedam limited installed ministries to lay males, the invitation was largely ignored. Of course, various forms of lay ministry have since flourished in many parts of the church, and particularly in North America, yet without the formal ecclesiastical approbation that a formal installation might confer.

Francis changed the equation, however, when this past January he revised Canon 230 in order to allow for both men and women to serve as installed ministers.

The new creation of the installed ministry of catechist, open to males and females, does represent a broadening of formal church ministries. Its impact could be even greater if its establishment were to encourage episcopal conferences to finally respond to Paul VI's invitation and create other "installed" ministries appropriate to the needs of their local churches.

Does this modest ministerial development explicitly address the pressing question regarding whether to allow both men and women, married and single, to be considered for all public ministries, including those constituted by sacramental ordination? No, it doesn't. But a renewed emphasis on a diversity of public, ordered ministries could further move our church away from the reductive clergy-laity binary.

The more our church is animated by a variety of baptismal charisms and ordered ministries, some formal and some less formal, some constituted by public installation, others by sacramental ordination, the more it can distance itself from the toxic sacralization of sacramentally ordained ministries, and the unnecessary restrictions that sacralization has encouraged.

Richard Gaillardetz is the Joseph Professor of Catholic Systematic Theology at Boston College.