A response to John Allen at Crux 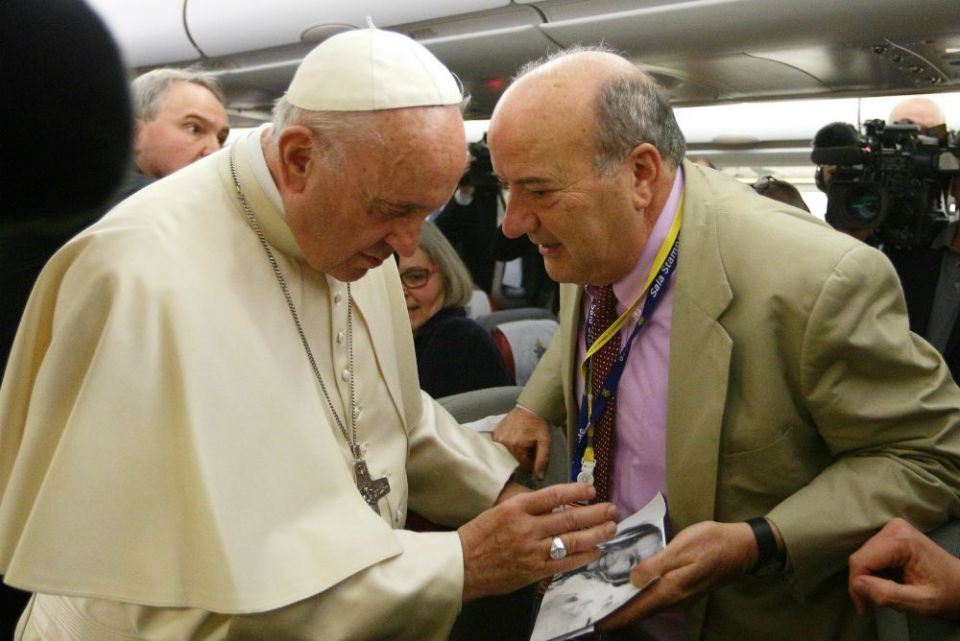 Pope Francis blesses an image of a sick child held by Reuters reporter Phil Pullella aboard his flight from Rome to Yangon, Myanmar, Nov. 26, 2017. (CNS/Paul Haring)

Taking part in the press conferences Pope Francis holds aboard his flight home after a trip abroad is one of the most stressful and difficult jobs for Vatican correspondents.

After being part of Francis' traveling press pool for 22 visits, I know the pattern pretty well, and take the opportunity here to lay out the process as a response to a recent critique by Crux's John Allen.

We go somewhere with the pontiff for three to four days, and work 16 to 18 hours each day (no joke) — traveling from city to city on bus, plane and helicopter as we send reports back to our editors.

Rushing to file that last story without succumbing to sleep-deprived exhaustion as we head through airport security to board the plane home, we've now got to decide what questions to ask, and who will ask them.

And of course the sometimes vicious lion of ego begins to enter into it, as people realize this may be their only shot to speak to the pope directly, and perhaps give their paper or news outlet some needed publicity.

With respect to John, who used to take more frequent part in these trips, I think we do more than an honorable job.

While sometimes someone's preferred question doesn't get asked — in John's case, about Crux's publication of the allegations of an ex-aide of former Cardinal Theodore McCarrick — it usually has to do with questions of international courtesy than any sort of malign Vatican plot.

Occasionally, I am the journalist tasked with organizing the in-flight conferences, a process the Vatican press office has entrusted for years to a loose union we Vatican correspondents maintain, primarily for purposes of equitably determining mundane logistical matters.

When the coordinator of the union, Cindy Wooden, the Rome bureau chief for Catholic News Service, is not present on a trip to organize the questions, I sometimes do so.

The process is pretty straightforward. In the last hours of a papal trip, journalists of various languages form groups together to hash out (read, sometimes shout at one another) what their language group would like to ask, and who will be asking it.

The union's organizer for the trip makes the rounds among the groups (read, begs them to finish their shouting soon and make a decision) and puts together a list of the names and order of people who will ask questions. That gets handed to Vatican officials just as the flight takes off. We never share the questions, only the names of those asking.

The protocol for determining the order of who asks questions is also pretty straightforward. As a courtesy, the first two questions go to journalists from the country the pope has just visited. (Or, more, if the pope has visited several countries).

Then, each language group — Italian, Spanish, English, French and German — is owed a question before the cycle repeats, if there is time. Which of the language groups gets questions first is nearly always determined by which group didn't get a question in the last press conference.

Last in the order for the press conference on the flight home from Francis' May 31-June 2 trip to Romania was the English language group. That was because we had been the only foreign language group to have had a question after the pope's most recent trip, his May 5-7 visit to Bulgaria and North Macedonia.

As Philip Pullella, the longtime Vatican correspondent for the news agency Reuters, tweeted in response to the Crux column: "This presumes that the question one person or group wants to ask is the only question and should be put at the front of the queue."

"But the church, and the media, are from a lot of places and it was a short flight," said Phil. "It would have been asked had there been time."

Pillar: Shoot for the stars and land in the gutter

A journalism of peace: the media's indispensable social function