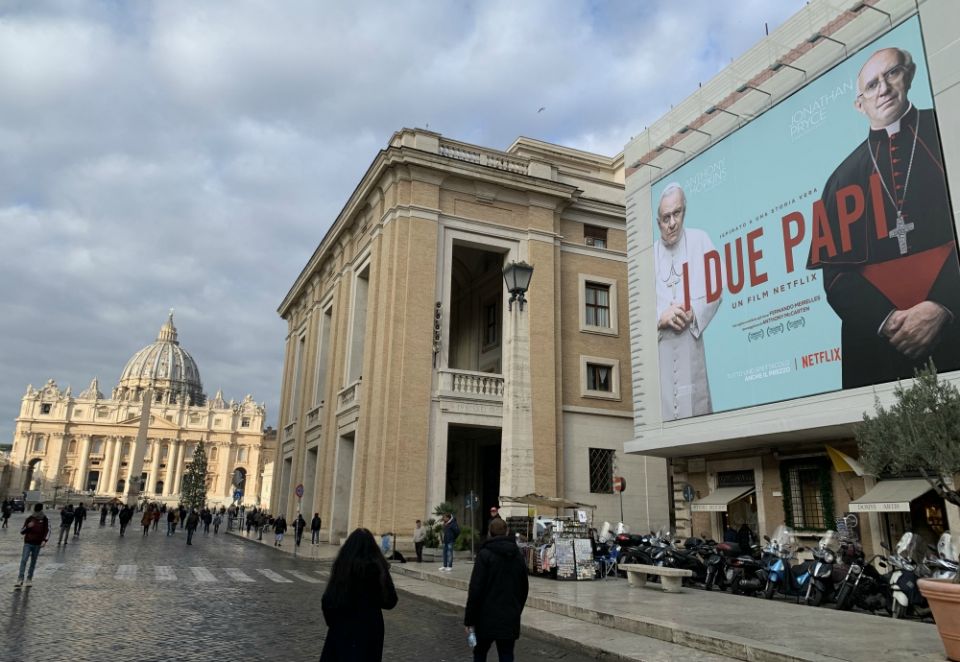 An advertisement in Italian for the Netflix movie "The Two Popes" is seen on a building near the Vatican Dec. 16. (CNS/Cindy Wooden)

Of course, the Netflix movie is a fiction, almost a caricature. Anthony Hopkins is Pope Benedict XVI and Jonathan Pryce is Pope Francis, the respective movie heroes of the right and of the left. The movie moves from the election of Benedict to that of Francis.

The right complains about a Vatican-owned building displaying a "The Two Popes" poster because Netflix is streaming a Brazilian "gay Jesus" Christmas parody. So, they say the church has sold out. Not to mention their annoyance at the way Benedict is portrayed.

The left sees the same poster as criticism of Francis. They see drawn knives: The building houses "Propaganda Fide" — the Congregation for the Propagation of the Faith — the dicastery to which Filipino Cardinal Luis Tagle was recently named. And they rather like the pre-Francis Bergoglio, warts and all.

Actually, "The Two Popes" is neither a sellout nor a criticism. The movie is both historically accurate and historically inaccurate. A fictional literary convention brings Argentine Cardinal Jorge Bergoglio together with Pope Benedict XVI at Castel Gandolfo, where they discuss the past and present, including flashbacks and dialogue from the published works of each.

Pope and future pope. The one is an eminent theologian, cerebral and rigid. The other is an affable pastor, interested in change but not in compromise. Each is rather likeable, in his own way. They discuss. They disagree. They agree. By the time the credits have rolled, they seem to have moved a tad closer. 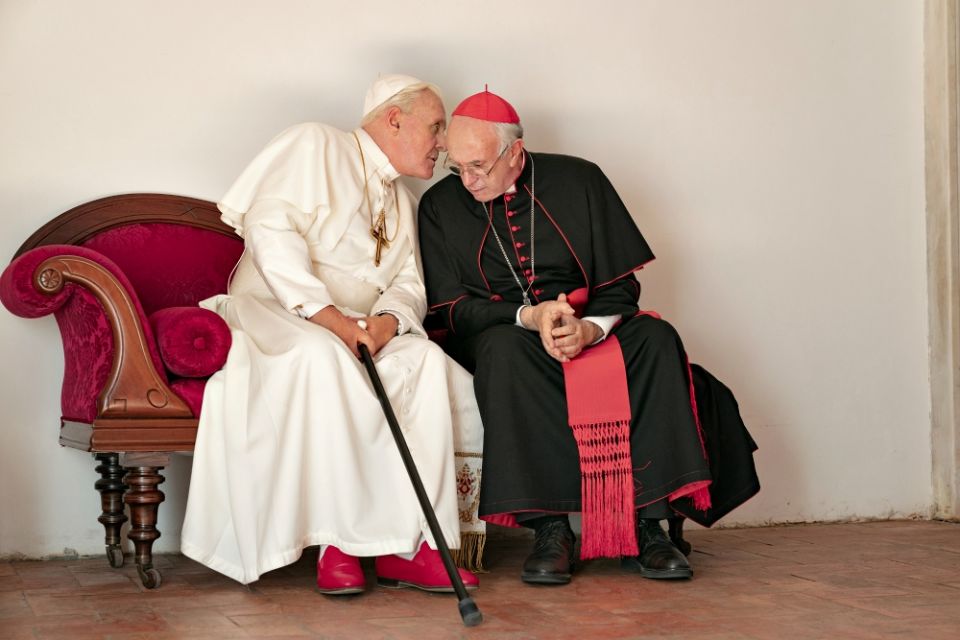 But "The Two Popes" is more than a high-level buddy film, and the right-left divide in the church is more than celluloid. The next movie is more likely to be called "The Schismatics."

That is not a joke. Schism, any historian will tell you, begins with denial of authority. That is, groups can and often do deny specific teachings. The headline schisms of early Christianity (Nestorian, Monophysite, Iconoclast) fall well behind the Great Schism of 1054. This last split, essentially East-West, had more to do with who's in charge than with the theological reasons ramped up to support it.

You remember the reasons: relationships of the Holy Spirit within the Trinity, leavened or unleavened bread for Eucharist, and Rome's universal jurisdiction.

This last point was the kicker; it created Roman Catholicism and the churches of Eastern Orthodoxy. Years, even centuries of acrimony bubbled over in the 11th century, and Rome and Constantinople excommunicated each other.

Now, wannabe schismatics in the blogosphere claim they hold the One True Faith and anyone who disagrees with them, beginning with Francis, is a heretic.

News flash: They are not "wannabe schismatics." They are already in schism. They fracture Christian charity. They rebel against the hierarchy. They deny papal primacy. They harbor more than an iota of difference with Rome.

And it's more than just patronizing bloggers and agonizingly disrespectful television and internet video. A few bishops annoyed about this or that are quick with their Twitter fingers. That bishops, archbishops and even cardinals openly disagree with Francis brings them perilously close to insubordination and denying papal authority. Remember the first symptom of schism: fracturing Christian charity.

Which gets us back to "The Two Popes." The substance of Christianity is not under siege, in the movie or in the blogosphere. The way Christianity is lived is the problem, on both sides. The left recoils at the Latin and lace that seem to bespeak medieval times and mores. The right is nearly hysterical over the possibility that, in essence, a parish pastor might render a summary judgment on an annulment case and welcome some folks to Communion.

There is more, of course. There always is. As the Latin Mass crowd becomes increasingly separatist, spewing the kind of acrimony that boiled over into earlier schisms, the rest of the church increasingly defends the progress of the Second Vatican Council. Metaphorically, the one wants to keep people away from the altar, while the other wants to bring them closer.

How will it end? The two sides, like the two popes, certainly have a lot to agree upon. Of course, there are disagreements. There always are. The challenge is for each and all to sit down and have a little more adult conversation.

[Phyllis Zagano is senior research associate-in-residence at Hofstra University in Hempstead, New York. She will speak Feb. 21-22, 2020, at the Los Angeles Religious Education Congress in Anaheim, California. Her books include Women Deacons: Past, Present, Future (in Spanish as Mujeres Diaconos: Pasaso, Presente, Futuro), published in France and Canada as Des femmes diacres and in Portugal as Mulheres diáconos: Passado, presente, futuro. Study guide is available for free download at https://sites.hofstra.edu/phyllis-zagano/.]

Column | After 'The Two Popes,' will the next movie be called 'The Schismatics'?

The many baptisms of 'Ozark'

'New Ultramontanists': Why do some Catholics fear change?