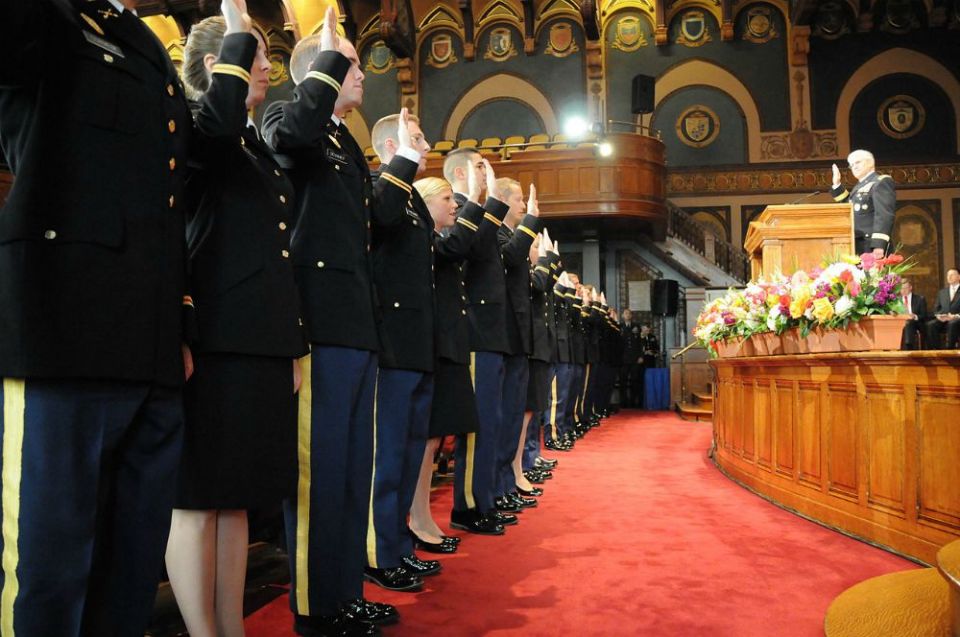 Should you have a liking for antiwar agitators who dizzyingly stay on message, protest after protest and arrest after arrest, you might sign on with Bob Graf. The Milwaukee-based former Jesuit scholastic who has close ties to the Catholic Worker, was and is the organizing force behind a national campaign to rid the Reserve Officers Training Corps (ROTC) at Catholic universities and colleges.

On Nov. 16, a hallowed date that marks the dark moment in 1989 when six Jesuits priests and two companions were murdered in El Salvador in part by U.S. Army-trained gunmen, rallies were staged on multiple campuses. By Graf's count, Jesuit schools account for 16 of the 25 Catholic universities and colleges that accept Pentagon money to train and teach undergraduates in the lethal ways of military might.

After four years of taking classes that range from military history to battlefield tactics, as well as regularly gunning and drilling, the graduates are commissioned 2nd lieutenants and required to put in eight years. Similar to the no-cost education given to cadets at the nation's military academies, ROTC soldier-students also receive free ride scholarships — plus rake in stipends.

With no draft and America in a permanent state of war, the schools are little more than recruitment factories.

Anchored in Milwaukee, where the Jesuit's Marquette University stitches together a tight fabric of four ROTC programs — Navy, Air Force, Marines and the Army's Golden Eagle Battalion — Bob Graf has long been denouncing the school's militarism. He recalls that "Pope John Paul II said that war is always a failure. Yet we find that Marquette is sponsoring the ROTC which promotes killing and especially killing without reflection. Instinctive killing, which we feel is extremely contrary to the Gospel of Jesus — the Jesus who promoted and taught nonviolent love. Marquette's teaching violent killing is contrary to the Gospel."

Nov. 16, Graf and some 18 others, including members of the Casa Maria Catholic Worker house, vigiled on the Marquette campus, with several holding large-lettered signs with statements like: "Close ROTC. Teach Christian Love, not war" and "ROTC teaches violence and war. Close it."

In the spirit of Gandhi's belief that dialogue with power is essential and sometimes well worth it, the group wended to the Jesuit residence to deliver a letter to the superior explaining their opposition to the school's ties to the military. It was something less than a Christ-like welcome they received.

Graf: "When we entered the Jesuit residence we were told right away that we needed to leave. We asked for the superior and without checking with him were told he was in a meeting. We said we would wait, but a number of Milwaukee police entered the building and said we were trespassing and had to leave immediately." Rather than get further dusted, the group called it a day and departed, their point having been made.

Bordering on the ironic, the militarized Marquette is home to the papers of Dorothy Day. It's not a wild surmise that the archives include letters from the pacifist-anarchist co-founder of the Catholic Worker. On April 15, 1966, Day wrote to Fr. Colman Barry, the president of St. John's University in Minnesota: "I cannot accept the honorary degree you so generously offer. I have had to refuse two other honorary degrees from two other Catholic colleges. (Jesuit and Christian Brothers). … I am sure you understand, dear Fr. Colman, especially right now in view of our country's involvement in Vietnam, our opposition to ROTC and my own necessary involvement in civil disobedience, draft refusal (not draft dodging), etc." *

On April 22, 1971, she penned this to Catholic University president Clarence Walton: "It is with all humility that I must refuse your generous offer of an honorary degree. The Catholic Worker stands in a particular way for the poor and the lowly, for people who need some other kind of schooling than that offered by universities and colleges of our capitalist system. I have had to refuse seven colleges and universities for the reason they had ROTC and one way or another receive grants that have to do with war and defense."

Daniel Berrigan, who had several teaching stints at Catholic ROTC schools, shared Day's distain for church and state complicity — though voicing it with a bit more acidity: "It is probably no news," he wrote, "that the showcase Catholic universities boast prestigious theology departments, even while the military marches on their commons. The incongruence of this is, as they say, instructive to the seeking mind. Military presence, military instruction, maneuvers; and then the word of God. … I recall that in the past years I have been invited to the campuses of five religious orders, including my own: Vincentians, Holy Cross, Franciscans, Benedictines, Jesuits. One each campus, theology looms large; on each campus also, ROTC. The Big Buck stalks the Little Book, all but slams it shut. The theologians who consider such matters to be morally grotesque are few."

In Washington on Nov. 16, it was Arthur Laffin, Kathy Boylan and others from the Dorothy Day Catholic Worker house who gathered at the gate of Georgetown University. The campus ROTC office reports that 27 cadets are in The Hoya Battalion and with an assortment of nine professors including colonels and captains teaching five courses that award academic credit.

In a flyer passed out to students and faculty who either joined the witness or happened to be passing by, Boylan noted that it was Fr. Ignacio Ellicuria, one of the six Jesuits slain in 1989, who was asked in a 1985 interview for his thoughts on Georgetown's hosting an ROTC program. He replied: "Tell the Jesuits of Georgetown that they are committing mortal sin because they are supporting the forces of death which are killing our people."

At the time, one Georgetown Jesuit in full sync with that direness was Fr. Richard McSorley. The pacifist priest, who founded the school's Center for Peace Studies and was a revered classroom professor with large enrollments, regularly stood on the busy campus concourse gripping a sign that asked: "Should we teach life and love or death and hate?" His decades of protesting ROTC, which matched his many arrests for civil disobedience against the Vietnam War, won little faculty support.

In first hour of my fall semester Georgetown class, "Peace Is Possible," I bring my 48 students to the Jesuit cemetery in the center of the campus, there to find Fr. McSorley's grave for a few moments of remembrance. One of those offering a prayer this year was a senior student who is majoring in justice and peace studies and minoring in religion, ethics and world affairs. Fittingly, her opposition to Georgetown's ROTC found her among those at the Nov. 16 rally.

The same day she delivered a 600-word letter to the office of John Degioia, the university's president. In heartfelt, lucid and respectful prose, the student, a campus organizer against ROTC, wrote: "I am reaching out to you to share my hope for greater teaching and commitment to active nonviolence. … As I sit in class everyday, I personally find it very troubling that a Christian institution founded on the principles of peace and social justice hosts military training, teaches war and promotes violence as a means to increase the profits for the military-industrial complex. … By hosting a ROTC program, Georgetown University is sending an implicit message to young Christian men and women that it is alright to learn to kill others. … If you wish to discuss the above with me, I am open to it. Thank you so much for reading my opinion … [and] for all that you do."

With a pope who holds back little when condemning war, it has to be wondered why Francis doesn't move past the rhetoric and tell his American Jesuit brothers to rid the military from their campuses. It's a major low of his papacy that he remains silent, just as it is a major high that people of conscience like Bob Graf, Arthur Laffin, Kathy Boylan and my star student resist and persist.

* An earlier version of this story had a typographical error that stated the letter was in 1996; it was 1966.

[Colman McCarthy directs The Center for Teaching Peace in Washington and has been writing for NCR since 1966. His recent book is Teaching Peace: Students Exchange Letters With Their Teacher."]

Is the Catholic Worker a 'racist institution'?