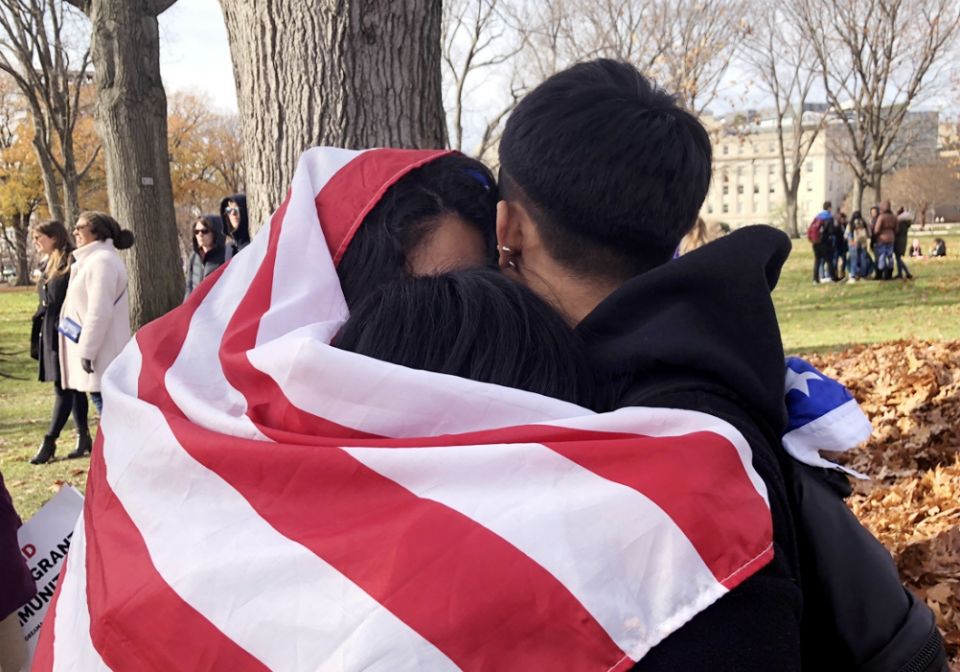 Young adults protect themselves from the cold by wrapping themselves in a U.S. flag near the U.S. Capitol during a rally Dec. 6, 2017, in support of undocumented immigrants. (CNS/Rhina Guidos)

The Trump administration is the most anti-Latino one that we have ever had. Donald Trump began his campaign for the presidency by racializing Latinos as mostly criminals and rapists. He called for and continues to call for a wall and for Mexico to pay for it. The wall is not just a structure for Trump and his supporters, but a symbol of keeping out the "zombies" or, in this case, Mexicans and Central Americans fleeing poverty and violence.

He did away with the Deferred Action for Childhood Arrivals (DACA) program that President Barack Obama through executive action had provided for temporary protection for the Dreamers, who were brought to the U.S. as children, from being deported.

Trump has likewise increased deportations of undocumented immigrants irrespective if they have a criminal record. Just being in the country without papers — a misdemeanor — is enough now to be rounded up and deported. He continues to play games and hold Dreamers hostage until he gets an immigration bill that will give him his wall and significantly reduce what he calls "chain migration," but what is really family reunification.

Family reunification has been central to U.S. immigration law for decades, but now Trump want to eliminate this. Why? Because he and his people don't want any more Mexicans and other Latinos to come into the country. They see them as inferior people who will racially pollute the country. Such racism!

Trump, in his own words, does not want any more immigrants from "shithole countries." And now Gen. John Kelly, chief of staff, has stated that those Dreamers who did not sign up for DACA are "too lazy to get off their asses." This is the resurrection of the racist stereotype of the lazy, sleepy Mexican.

All of these statements and actions add up to the most racist and anti-Latino administration in American history. Trump and his staff don't want more Latinos, or other people from developing countries for that matter, to enter the U.S. because they want to keep America "white." They "want their country back."

The problem that Trump has, however, is that Latinos are here to stay, close to 60 million with another 11 million undocumented, mostly Latino, in the country. The Latino population continues to grow. Every month, thousands of Latinos turn 18 and many will register to vote.

I had predicted in 2016 that the Latino vote would determine the presidential election. It didn't turn out that way, but not because Latinos did not vote. The actual Latino vote increased in the election. It was other parts of the Obama coalition that did not turn out as much.

I'll go out on another limb and again predict that Latinos will be the key to the 2018 elections. Latinos will turn out in record numbers to punish a president who has said nothing but racist statements about them. They will vote to send Trump a message — don't mess with Latinos.

The Latino vote will allow the Democrats to retake the House of Representatives, beginning with their vote in California, where several congressional districts held by Republicans are leaning Democrat this time due to the Latino vote.

It may also be possible that the Latino vote will further allow the Democrats to retake the Senate, although that may be more difficult. Still, it will be enough for the Democrats to control the House and put a major obstacle to Trump's attempt to subvert our democratic principles and institutions and to install an authoritarian state.

We are living in dire times and true supporters of democracy and freedom, including Latinos, must rise to the challenge and protect our liberties.

Opinion | We're seeing the most anti-Latino administration in US history