The nuclear option has to be taken off the table 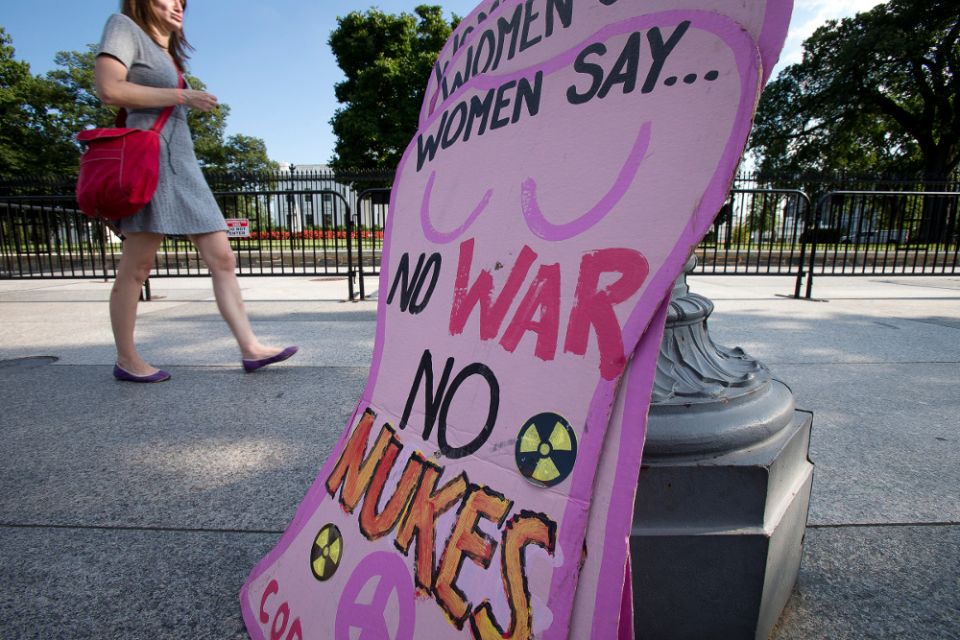 An anti-nuclear war poster is seen outside the White House in Washington Aug. 9. (CNS/Tyler Orsburn)

People in the United States and across the globe are feeling anxious about the escalating tensions between the U.S. and North Korea. Almost all of us are removed from the strategic and implementation aspects of what may come to pass. The exceptions are the war council and members of the military who might be called upon to push the nuclear button.

The Catholic Church offers ethical advice covering countless aspects of moral conduct. The use of nuclear weapons is an area in which the directive is unambiguous and, at this time, highly relevant.

In the unlikely event that President Donald Trump were to order a nuclear strike that would result in large numbers of civilian casualties, Catholic teaching is that military personnel should refuse orders. Further, military strategists should consider themselves bound by the principle of discrimination and should not devise plans of attack that would bring death to civilian populations.

In other words, don’t follow the leader if his thinly veiled threat evolves into an order or a plan to use nuclear weapons.

While there is confusion about what Trump meant when he said, “North Korea best not make any more threats to the United States. They will be met with fire and fury like the world has never seen,” his words seem to leave open the possibility of a nuclear strike.

Warfare has evolved over the ages from sticks and stones to nuclear weapons. In every age, limits have been set to minimize harm to civilians. Beginning in the 19th century, meetings in Geneva resulted in agreements among nations to prevent harm to civilians.

It is understandable that people today will question whether any limits can be imposed once hostilities commence. War is hell and it has been more than 900 years since chivalry was in vogue. Many of us have lived through Vietnam, Afghanistan, Iraq and the Syrian horror and think imposing moral limits on warfare is an impossibility.

The late Cardinal Joseph Bernardin would disagree with our pessimism. Speaking at Fordham University on Dec. 6, 1983, he spoke of the U.S. bishops’ 1983 pastoral statement “The Challenge of Peace” and said, “Directly intended [nuclear] attacks on civilian centers are always wrong. The bishops seek to highlight the power of this conclusion by specifying its implications in two ways: First, such attacks would be wrong even if our cities had been hit first; second, anyone asked to execute such attacks should refuse orders.”

Pope Francis has repeatedly urged a diplomatic solution to the enmity between the United States and North Korea. The pope’s wisdom and humility lead him to the conclusion that diplomacy is the only option available to the nations involved.

In a recent interview, the pope said, “For the future of humanity today, a wider war could destroy, perhaps not half of humanity, but a good part of humanity and its culture, everything.”

Against the background of the pope’s chilling assessment of what could be at stake, the nuclear option has to be taken off the table. In addition, the rights of civilians to be safeguarded as noncombatants as well as the claims of conscience of those in the military need to be affirmed.

[Eileen P. Flynn, a moral theologian and retired professor, is author of My Country Right or Wrong?: Selective Conscientious Objection in the Nuclear Age and How Just Is the War on Terror?: A Question of Morality.]

Perspective | The nuclear option has to be taken off the table

A world without nuclear weapons is possible, pope says in Japan