Our 'short list' for the 2019 Cannes Film Festival: zombies, cops and flowers

by Rose Pacatte
Opinion
Culture
This article appears in the A Nun at Cannes feature series. View the full series. 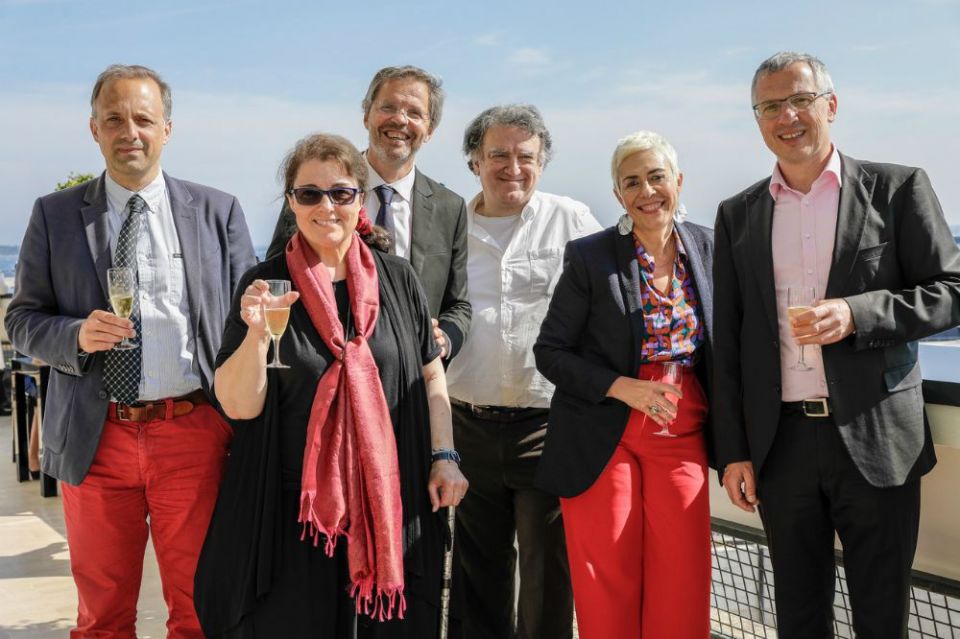 Our jury and ecumenical committee celebrates the conclusion of our work. (Provided photo)

Cannes, France — The 72nd Cannes Film Festival ended on May 25 with the awarding of the jury prizes. Our ecumenical jury watched the awards ceremony on television at the house of the parish priest of Notre-Dame de Bon Voyage with about 30 other people. Unlike the Academy Awards in the U.S., the Cannes award ceremony only took about 90 minutes. The president of the jury, Mexican director and filmmaker Alejandro González Iñárritu, had the honor of naming each winner.

Our own ecumenical jury watched and judged the same films as the official jury, and we debated and voted late into the night before deciding on our winner. We chose "A Hidden Life," about Nazi conscientious objector Franz Jägerstätter that I reviewed previously. At least six films made it to our short list, so overall I would say that most of the films, even those that did not meet our criteria completely, were films that told their stories well through sight and sound.

As for the film that saw most press walkouts because of explicit prolonged sex scenes — the four-hour-long "Mektoub, My Love: Intermezzo" by Abdellatif Kechiche — I did not see it. With the option for the press and our jury to watch a film at 10 p.m. or at 8:30 a.m., I always chose the morning screenings. I received word from my fellow jury members that the film did not meet our criteria. 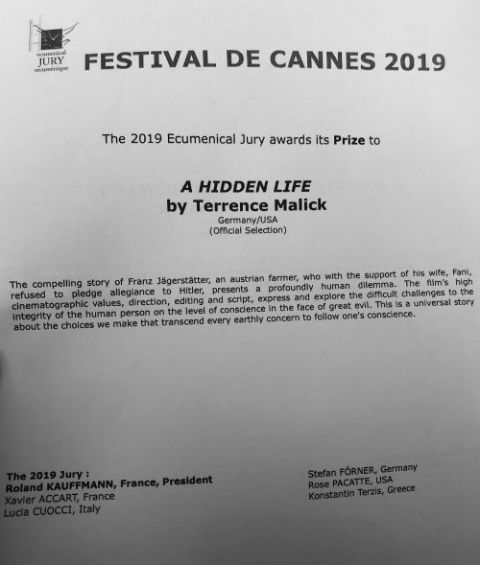 We chose "A Hidden Life," about Nazi conscientious objector Franz Jägerstätter, as the winner. (Provided photo)

My sister-in-law and I instead visited the monastery island of Saint-Honorat. We attended the monastic Mass, walked the stunningly beautiful island, visited the 14th-century monastery ruins and had lunch at the island restaurant before heading back for the final films. It was the one break we had during a very intense 13-day celebration of world cinema and ecumenical activities.

While not planned, some themes emerged from the 21 films in the official selection of the main competition: Social problems and justice, the role of police in our lives, death and zombies. The festival opened with Jim Jarmusch's walking-dead zombie comedy "The Dead Don't Die." It amused our jury very much that other films mentioned zombies or creatures like them. I liked Jarmusch's film because of its meaningful — and funny — political and social commentary. "The Dead Don't Die" did not win any prizes — perhaps its sensibilities were too American.

"Les Misérables" is a powerful drama from French director Ladj Ly about the interaction between a team of three cops with people of a poor, multi-ethnic housing development and surrounding neighborhoods in Paris. Based on the 2005 riots, the film shows how a racist bad cop can influence others, how a good cop can do bad things even when trained not to, and how a very fine cop can end up in a lethal confrontation he tries to avoid at all costs. I think that this film will travel well to U.S. audiences. The human and ethical issues are front and center about those who live in misery in Paris, be it economic poverty or that of the spirit — or both.

"Bacurau" is a film by Brazilian filmmakers Kleber Mendonça Filho and Juliano Dornelles. When the matriarch of an extremely rural village dies, strange things start happening. First, the village, Bacurau, disappears from all maps, online and off. A politician appears asking for votes, and strangers come bringing death and no good with them. The convoluted plot continues the idea of the influence of the walking dead in a religious community with a church but no priest. It makes strong social and political statements about the true arbiters of power in a small village almost everyone seems to have forgotten. It is a weird but engaging enough film.

"Sorry We Missed You" is a film by Cannes (and ecumenical jury) favorite, Ken Loach. It tells the story of an ordinary working man who decides to go into business for himself as a franchise delivery man. For this, he must sell his wife's car to buy the new van he will need. She is a home nurse and caregiver who agrees to the sale because she loves him but now must take the bus, making her day and time away from her children even longer. Their teen son is testing the limits of his father's love and authority, and their daughter has difficulty dealing with the verbal fights between her parents as the father's new business fails and his debt grows. 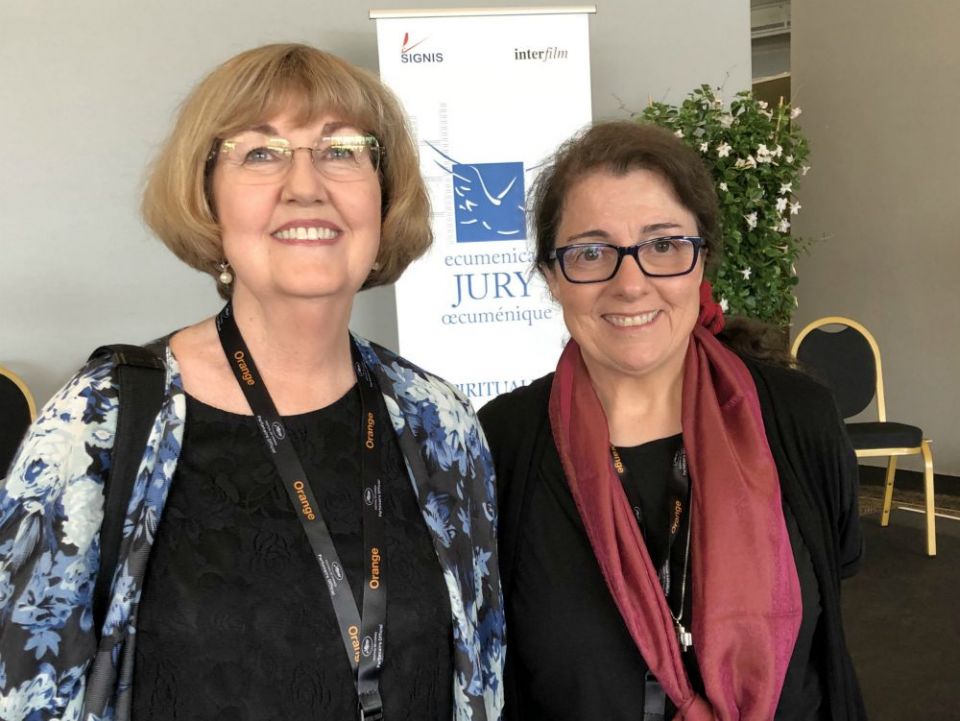 My sister-in-law, left, traveled with me to France for the festival. (Provided photo)

Loach said at the press conference that he wants this film to be a catalyst for the social change needed in society. It was strange seeing one of Loach's films without explicit signs of hope or humor. But as our jury dialogued about this film, we agreed that the strength of the wife is unmistakable. She is the sign of hope that will pull their family through. Loach and writer Paul Laverty, who collaborated on the moving and heartbreaking "I, Daniel Blake," always leave you thinking and wanting to do something to change the structures that oppress people who are trying to make a decent living in cultures mired in bureaucracy and lacking humanity.

"Atlantique" is by French director Mati Diop, who co-wrote the film with Olivier Demangel. Her parents are Senegalese, and she places her first feature film in Dakar, Senegal's capital city. When the owner of a futuristic office high-rise building refuses to pay his workers after several months, some of the men decide to leave for Spain via boat. One of them, Souleiman, is in love with Ada, a young woman about to be married to the son of the owner. On her wedding night, a mysterious fire breaks out in the wedding bed and the investigating detective becomes ill. Souleiman returns amid news that the boat sunk in a storm and all lives were lost. What is really going on? The supernatural is about to intervene in the social ills on the Dakar construction trade in very imaginative and dramatic ways. While this was not one of my favorite films, it was rather unique, which is always refreshing when you are watching three or four films a day. 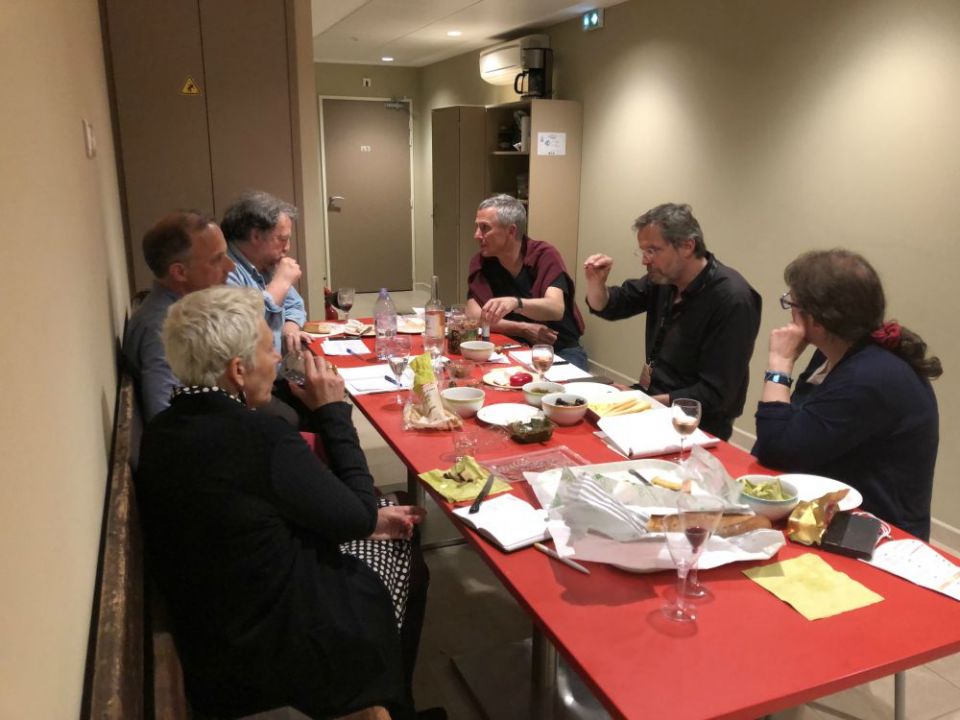 We debated and voted late into the night before deciding on our winner. (Provided photo)

"Roubaix, une lumière" ("Oh Mercy!"), from acclaimed French director Arnaud Desplechin, is a police procedural that could become the basis for a television series — as long as they keep the excellent Roschdy Zem as the lead actor. On Christmas night, when an elderly woman is murdered, several suspects emerge but two young women, who are neighbors of the victim, are arrested. The film explores their stories as the police look at different suspects and cases. Zem is Daoud, the captain, who lives for his job and his dream of owning a racehorse one day. Another young detective is overzealous and bonds with Daoud over horses, though he only likes to bet on them. His story creates a thread that Desplechin could have developed as the detective reflects in his journal on the memory of his first Holy Communion and the meaning of God in his life of law enforcement. It is a brief promise of more to come, and I wonder if there might be a sequel. This film has a subtle social commentary subtext, and it develops its main character very well.

"Little Joe" is a clinically clean and purposefully stilted science fiction film that I liked very much. It comes from director Jessica Hausner who co-wrote it with Géraldine Bajard and stars Emily Beecham and Ben Whishaw. Scientists in a biogenetic laboratory create a flower that genetically cannot self-propagate but manages to do so anyway. They name the first one Little Joe in honor of the head scientist's son. The real function of this strain of flower, however, is to become the center of people's love and attention and to make them happy with no memory of suffering. Questions about the nature of the human person and free will abound, but most of all — what is happiness? Our jury loved talking about this film as we all had different insights and interpretations of the same story. If this film gets a U.S. release, as I hope it will, I would use it for a retreat.

Even the Cannes Film Festival has its spiritual side

Opinion | Our 'short list' for the 2019 Cannes Film Festival: zombies, cops and flowers

'Okja' is a romping tale with a social conscience

At Cannes, Wim Wenders talks about making movies that matter