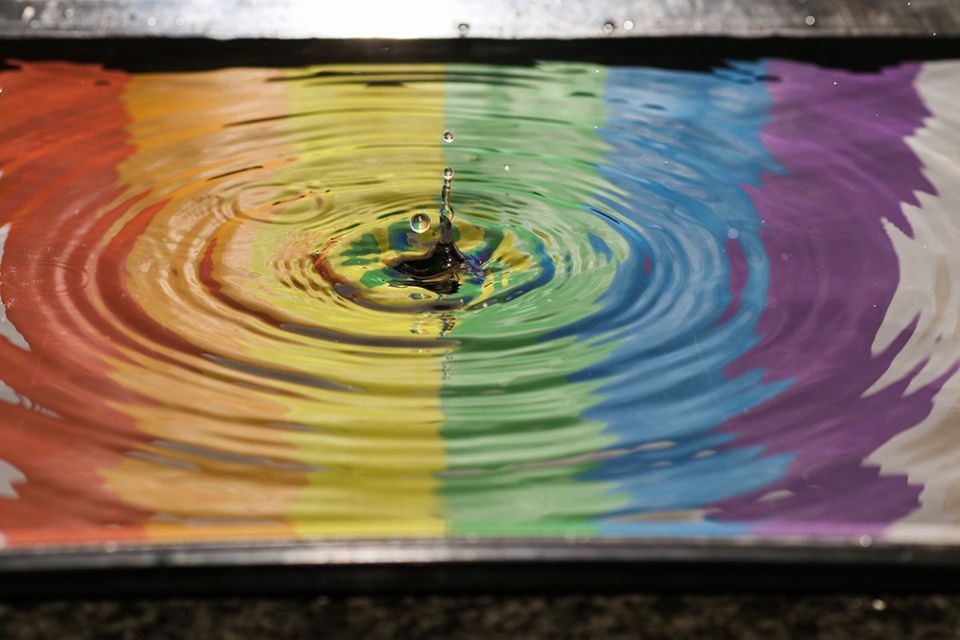 Nearly eight years ago, when I was a graduate student at Fordham University, I met a transgender person for the first time. Fordham was hosting a conference entitled "More Than a Monologue: Sexual Diversity and the Catholic Church." Catholic transgender activist Hilary Howes opened the conference with a compelling account of her life as a woman born "with male genitalia and a female brain." I had the chance to talk more with Hilary at a reception after the event, and I left that evening convinced of the authenticity of her experience.

Before hearing Hilary speak, I had never encountered a trans person — and to be honest, I had never really thought about the trans experience, which I'd wager is the case for most Catholics. Hilary's narrative of suffering and struggle with her self-understanding in a church that does not see her experience as valid or authentic brought about a genuine conversion experience for me, wherein listening to and engaging in dialogue with a person who loves her church despite all odds opened my mind and heart to new ways of understanding sex, gender and sexuality.

Despite its stated commitment to listening and dialogue, the Congregation for Catholic Education's instruction, "Male and Female He Created Them: Toward a Path of Dialogue on the Question of Gender Theory in Education," denies the experience of people like Hilary Howes to impose from the top-down the "complementarian" anthropology traditionally found in Vatican documents, like John Paul II's "Theology of the Body." Complementarity takes binary, male-female sexual relations — "male and female he created them" — as the measure of what it means to be human.

As someone who reaped the benefits and endured the challenges of Catholic education, and as a professor at a Jesuit institution, I am very concerned about the instruction — and about what it might portend for future Vatican statements on gender. In this column, I'd like to point out three areas of concern about the instruction — one scientific, one biblical, and one pastoral — in hopes of challenging Catholics of all stripes to celebrate the God-given diversity of gender expression with compassionate attention to the experience of people like Hilary Howes.

First, as a scholar working at the intersection of theology, ecology and science, I have serious concerns about the instruction's appeals to biology. The instruction describes nonbinary and transgender expression as aspects of a "strictly sociological" gender theory. To support this claim, it appeals to a binary biology based in XX/XY chromosome distribution: children are born either female or male, and claims that intersex or transgender persons exist are false expressions of "ideology of gender."

But medicine and psychology contradict the instruction's claims. In 2017, the American Medical Association, or AMA, stated that gender is "incompletely understood as a binary selection." It likewise supports "gender confirmation" therapies and surgeries that affirm a person's gender identity as experienced — well beyond the realignment therapies for which the instruction calls. In 2013, the American Psychiatric Association, or APA, renamed "gender identity disorder" as "gender dysphoria" in its Diagnostical and Statistical Manual, interpreting the experience of people like Hilary Howes not as an illness to be cured but as a genuine condition to be accompanied and treated with therapies and surgeries according to a person's self-understanding.

The instruction's appeal to binary gender science does not stand up to the contemporary scientific consensus. This point seems especially problematic given that the AMA and APA are organizations of scientific experts with the training to properly adjudicate these matters; trusting the Vatican's gender science is akin to trusting a diabetes diagnosis from a parish priest.

Second, as its title indicates, the instruction sees nonbinary models of gender as contrary to nature, per the Genesis creation narratives. But this claim stands in direct conflict with John Paul II's call for "intense dialogue" between faith and science and his 1996 declaration that there is "no conflict between evolution and the doctrine of the faith regarding man and his vocation." For, if evolutionary theory limits the influence of Genesis as an explanation of cosmic origins — accepting that the universe was not created in seven days — then the magisterium cannot hold that the same text is determinative for gender when the scientific consensus says otherwise. This alone should be weighty enough to raise concerns about biblical warrants for complementarity, but the instruction proceeds without reference to these concerns. Perhaps gender is an area in which, as John Paul II states, "science can purify religion from error and superstition."

Third, while the instruction explicitly opposes violence — including bullying in schools — against LGBTQ+ persons, the characterization of nonbinary gender expression as a rebellious choice based on "feelings and wants" enacts injustice against those who, like Hilary Howes, have sought recognition in a church that refuses to acknowledge their existence. The instruction appears blind to the social and ecclesial struggles LGBTQ+ persons face every day — struggles unimaginable to heterosexual, cisgender persons who hold sway in the church and world.

Startling statistics challenge the instruction's claim that trans and nonbinary experiences are matters of choice and indicate the church's complicity in violence against LGBTQ+ persons, especially given its presence in countries that criminalize trans expression and same-sex acts.

For example, from 2007 to 2014, an average of 250 trans people were murdered each year, and 369 trans and nonbinary persons were killed between October 2017 and September 2018. Most of them are trans women of color, and many die by violent means. Moreover, nearly 80% of trans and nonbinary teenagers report having attempted suicide as they have struggled to negotiate their gender identities. Given these statistics, trans and nonbinary gender expression are clearly not "only a 'provocative' display against so-called 'traditional frameworks.' " It seems the magisterium's dismissal of trans and nonbinary experiences as rebellion against nature serves only to end conversations about gender before they begin, and it scapegoats the LGBTQ+ community to uphold complementarity, negating the need for pastoral care that is authentically engaged with the struggles LGBTQ+ persons face each day.

But complementarity is neither biblical nor biological. The church must heed the experience of LGBTQ+ persons and cannot simply ignore scientific claims that prove inconvenient for the preservation and transmission of doctrine. In the name of the love proclaimed by Jesus — a love lived each day by trans Catholics like Hilary Howes, who seek justice for those marginalized in church and society — we must embrace the wonderfully wild diversity of all the beautiful creatures our God has made.

[Paul J. Schutz is an assistant professor in the religious studies department at Santa Clara University.]