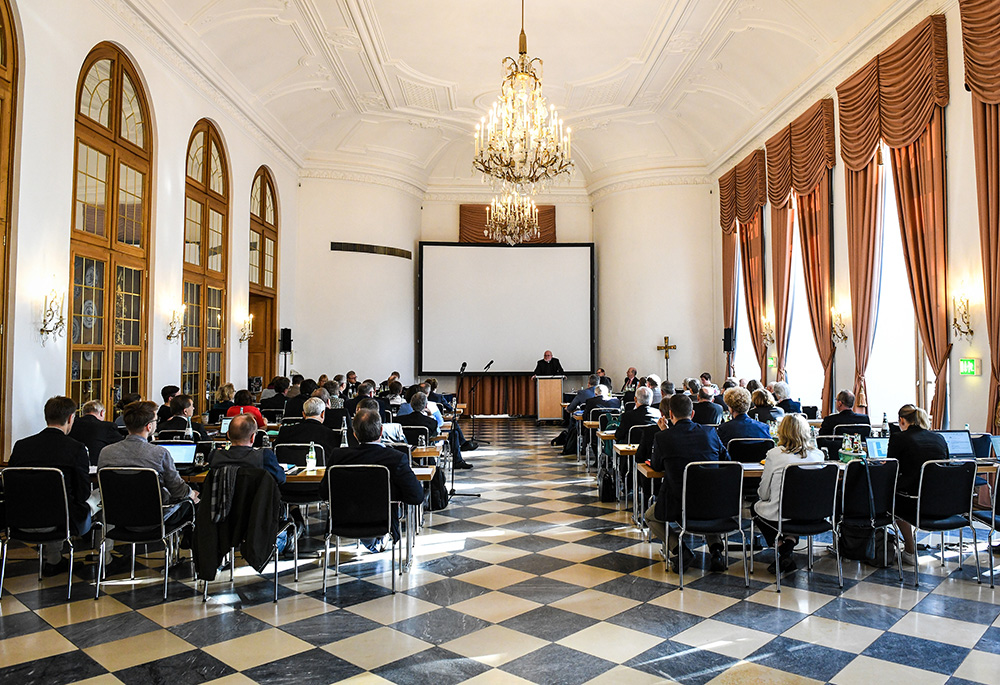 Cardinal Reinhard Marx of Munich and Freising gestures Sept. 13, 2019, during the extended Joint Conference of Bishops and Laity to prepare the "Synodal Way." The bishops of Germany, reacting to an independent study of the extent of clerical sexual abuse in their country and its possible causes, chose to initiate a "synodal" process that was not a synod or a plenary council. (CNS/KNA/Harald Oppitz)

A number of factors influenced the German Synodal Way: the devastating consequences of the sex abuse scandal by priests, the cover-up by many bishops and the appallingly low level of less than 6% of German Catholics participating in the Sunday eucharistic liturgies. The Synodal Way of the German church involves a synodal assembly with meetings beginning in 2020 and scheduled to end in 2023.

There are two significant characteristics of the Synodal Way. The first concerns the structure of the assembly. The German bishops have been working with the lay Central Committee of German Catholics. The assembly will have an equal number of bishops and laypeople, each having one vote. The bishops, then, are not just listening to the laypeople, but there are equal numbers of bishops and laypeople voting. This is a new structure in the Catholic Church that is disturbing to many.

The second significant characteristic of the Synodal Way concerns the topics to be discussed. They are not broad topics, such as evangelization, the liturgy or the social mission of the church, but rather very specific and controversial issues — power and checks and balances in the church, sexual morality, the priestly lifestyle and women's place in the church. These topics include many hot-button issues, such as the ordination of women, public blessings for homosexual partnerships, married priests and lay participation in the selection of bishops.

Many have seen the danger of schism in the German church. Soon after the process was first announced, Pope Francis on June 29, 2019, sent a letter to the German church reminding them that they need to walk in line with the universal church and to recognize the important role of the Holy Spirit, but the pope acknowledged that this "binding synodal procedure" is in accord with Vatican II.

Cardinal Reinhard Marx, the then-president of the German bishops, and Thomas Sternberg, the head of the Catholic lay group, jointly responded to the papal letter, thanking the pope for his guidance and support.

Cardinal Reinhard Marx of Munich and Freising, Germany, speaks Jan. 30, 2020, during a news conference for the opening of the synodal assembly in Frankfurt. (CNS/KNA/Harald Oppitz)

There was also a reported meeting between Pope Francis and Marx to discuss the issues. Apparently Marx recognized that the German church would not and could not go against the universal teaching of the church, but would furnish the results of their process for the discussion of the universal church. However, other curial officials, such as Cardinal Marc Ouellet, strongly criticized the structure of the Synodal Way as being invalid.

More recently, Cardinal Walter Kasper expressed reservations about the German Synodal Way. Kasper has generally been associated with the moral liberal wing of the German bishops, but he lately has been a member of the Roman curia and is reported to be close to Pope Francis.

Meanwhile, processes connected to the synod on synodality have been going on. Synods of bishops have taken place in the Catholic Church since Vatican II. Originally, Pope Francis scheduled the XVI Ordinary General Assembly of the Synod of Bishops to be held to discuss the issue of synodality, but then called for a detailed process inviting the whole church to participate in the discussions leading to the Roman synod, which is scheduled for October 2023.

The Vatican website on the synod on synodality has 10 different documents, the most important of which are the preparatory document and the vademecum or handbook. The purpose of the synod is for the whole church to walk together and reflect on the ongoing learning that can help the church to live communion, to advance participation and to open itself to mission.

What does the Spirit invite us to do in order to be a synodal church? The spiritual process of the synod involves listening to the Spirit and to all in the church, especially the minorities, to discern how the church is to live out its mission. 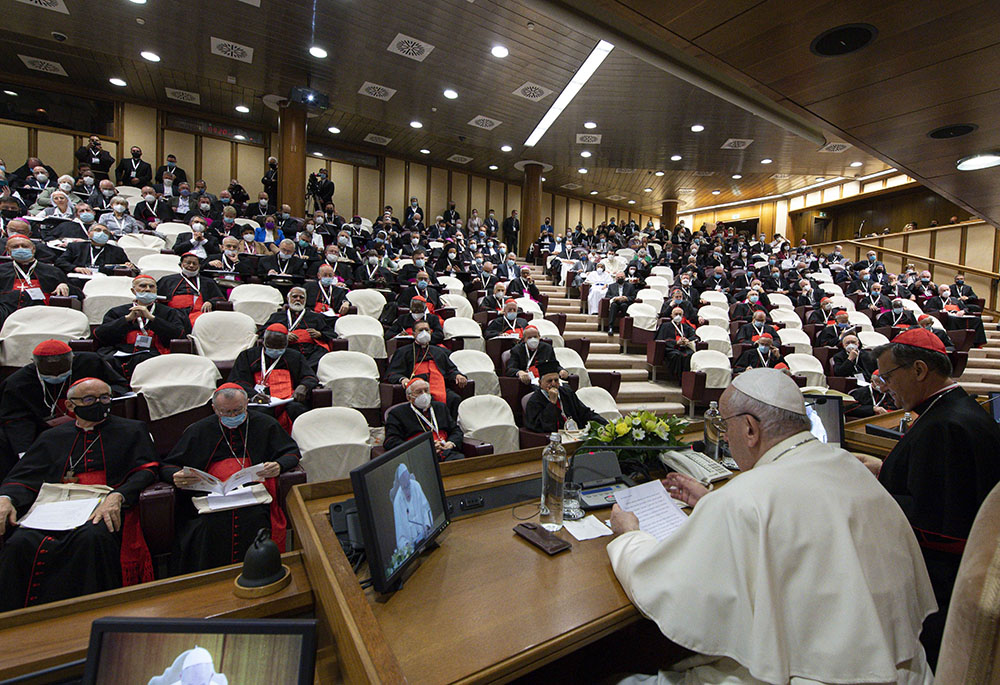 Pope Francis leads a meeting with representatives of bishops' conferences from around the world Oct. 9, 2021, at the Vatican. The meeting came as the Vatican launched the process that will lead up to the assembly of the world Synod of Bishops in 2023. (CNS/Paul Haring)

The preparatory document spells out in detail the processes that include four different phases:

The instructions and plans for the diocesan phase are quite elaborate and include questions and themes to be discussed. The basic question is: What steps does the Spirit invite us to take in order to grow in our journeying together as the people of God?

Questions are raised in light of 10 themes, and include such questions as: How are young people and women listened to? Do we hear the voice of minorities and the excluded? What prejudices and stereotypes injure our hearing? How does our church community identify the goals to be pursued and the way to reach them? How do we promote participation in decision making within hierarchical structures? How can we grow in communal spiritual discernment? In addition, conversation and dialogue in the assemblies can also touch on other issues.

The preparatory document also points out the pitfalls that can prevent true synodality. These pitfalls are enumerated in terms of temptations — to want to lead ourselves rather than be led by the Spirit; to focus on ourselves and our immediate concerns; to focus only on structures or problems; to treat the synod as a kind of parliament involving political battles between different sides; and the temptation of conflict and divisions.

Both the German Synodal Way and the Roman synod on synodality are scheduled to conclude in 2023. What will they accomplish?

One cannot know with certitude what will happen; but, in my judgment, neither synod will overcome the existing divisions in the Catholic Church and may even exacerbate the existing problems and tensions. There will be no consensus that will change the existing tensions.

An ideal situation would attempt to put flesh and blood on the goal of unity in necessary things, freedom in doubtful things, and charity in all things. (Many claim this guiding principle was found in Augustine, but more recent scholarship shows it probably came from the 17th-century German theologian Rupertus Meldenius.)

The problem is in the details. What is necessary and what is doubtful? In the present situation, there is no agreement about what is necessary and what is doubtful — and not only in the Roman Catholic Church. In the light of these existing tensions, the process of listening and trying to discern the voice of the Holy Spirit will probably not be successful. This is true for both Catholic synods discussed here.

The German Synodal Way, to its credit, has identified many of the areas of discussion and disagreement within the church — the ordination of women, a reform of church teaching on sexual ethics including homosexuality, the acceptance of married men into the priesthood, more lay input on the appointment of bishops. All recognize the German Catholic Church cannot change the teaching of the universal Catholic Church on these issues. Likewise, the Synodal Way, in my judgment, is not going to go into schism by cutting itself off from the teaching of the universal Catholic Church. In the end, the Synodal Way could easily cause more disillusionment and even occasion more Catholics leaving the church.

The synod on synodality faces other problems. Perhaps some of the questions addressed in the German Synodal Way can be raised in the discernment process, but the Roman synod processes recognize the teaching role of the pope and bishops. In fact, Canon 343 in the Code of Canon Law now maintains that the synod itself can only make a binding decision for the whole Catholic Church when the pope explicitly accepts such decisions. The synod will probably not even discuss the most divisive issues in the Catholic Church today that are the primary concern of the German Synodal Way.

I am not very optimistic about what both synods will accomplish.

I hope I am wrong.