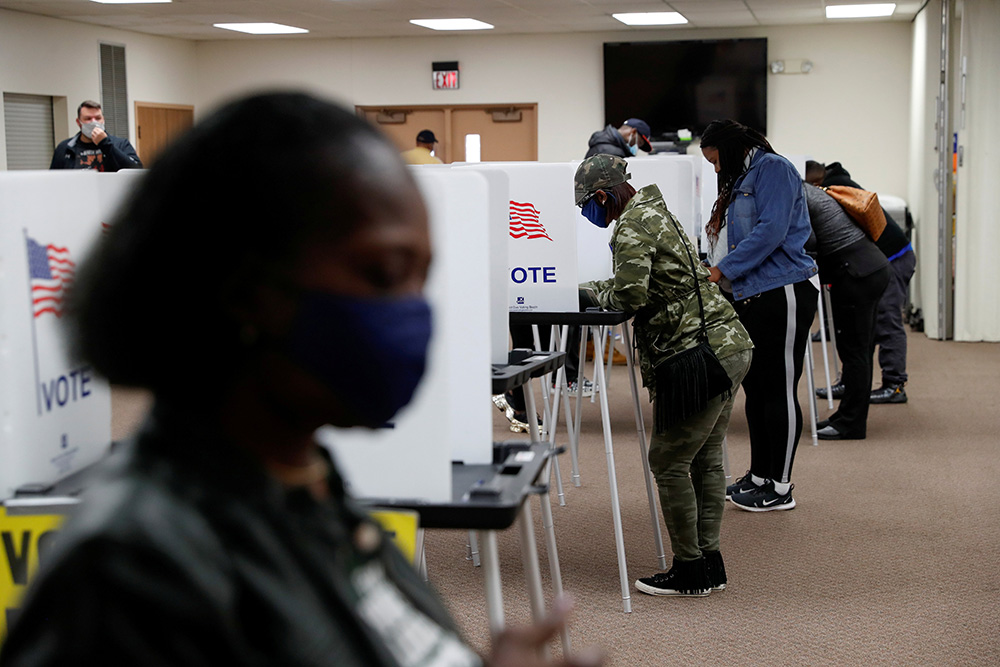 People vote at a polling station in Flint, Michigan, during the presidential election Nov. 3, 2020. (CNS/Reuters/Shannon Stapleton)

In the countdown to the new Biden-Harris administration, Catholic social teaching has an important message of both content and process. Pope Francis in his most recent encyclical, Fratelli Tutti, challenges the world to engage in a new form of politics: a politics of encounter. It is this process that we at the Catholic social justice lobby Network have been engaged in over our almost 50-year history. It is best known through our seven Nuns on the Bus campaigns. What is this politics of encounter and how does it impact policy?

Francis challenges us to develop a sense of solidarity through encountering people who think differently from ourselves. This solidarity is grounded in the knowledge that we share a common concern for each other. He says:

Solidarity means much more than engaging in sporadic acts of generosity. It means thinking and acting in terms of community. It means that the lives of all are prior to the appropriation of goods by a few. It also means combatting the structural causes of poverty, inequality, the lack of work, land and housing, the denial of social and labor rights. It means confronting the destructive effects of the empire of money.

On our 2020 virtual "bus trip" in advance of the November election, we encountered many people across the country who could testify to the need for a new sense of solidarity that confronts the empire of money.

At New Labor in New Brunswick, New Jersey, we met with low-wage workers who had banded together to support one another because they were having their wages stolen by their employers. Many were day workers or dishwashers in restaurants who were not being paid at the end of the day or the end of the week. They came together to help each other demand their pay. In the process, they discovered that some of their employers had it in their business plan not to pay workers their full salaries in order to increase their profits. This is a destructive effect of the empire of money.

At St. Luke N.E.W. Life Center in Flint, Michigan, we learned of the 2014 exploitation of the people by the state government in changing the source of their drinking water in order to save a little money for the government. This resulted in high quantities of lead and contaminants to be in the tap water in the entire city. Consequently, all of the water pipes in the city (including those in private homes) need to be replaced. Additionally, children have permanent disabilities because of the lead contamination. A "destructive empire of money" caused destruction to this city's infrastructure and its people.

In Immokalee, Florida, we met with the agricultural workers in the Coalition of Immokalee Workers' Alliance for Fair Food who have banded together for years to work for just wages. The workers educated us by speaking of their efforts over many years to get the large fast food chains and grocery stores to pay them 10 cents more per bushel. A mere 10 cents made a big difference for the workers. They created a movement by sharing their goals with faith communities around the country. In the off-season (and pre-pandemic), the workers went to talk with congregations about their needs and recruited these faith communities to be part of their campaign. Through encounter, they built a momentum that is helping create change.

These three examples demonstrate that employers and governments can make choices at odds with the needs of the people. Catholic social teaching's call to solidarity challenges us to make decisions with the most vulnerable in mind. We the people are called to advocate that the new administration shape its policies from a stance of solidarity with those who are too often exploited, as well as with those who are wealthy.

I interpret this mandate as calling for policies that care for the whole. It starts with the requirement to ensure wages high enough to support families and end the need for so many low-wage workers to work two and three jobs to just survive. Wages need to be sufficient to allow workers to have a day of rest with their families as well as save for their futures.

Employers that fail to provide such wages need to change their ways, and we consumers need to make sure that they do. The new administration can work to increase wages and ensure that they are actually paid.

Governments need to have enough revenue to provide for the needs of their people. This means that tax policy is a justice issue. Many legislators, as well as ordinary people, have the mistaken impression that taxes are a bad thing. They are not evil. Taxes are the way that we express one aspect of solidarity. Catholic social teaching calls on all of us to invest in our nation to meet the needs of our society.

The Republican 2017 federal tax bill was the antithesis of a just tax bill. It gave tremendous tax cuts to the richest people and starved the U.S. treasury, thus undermining our government's capacity to meet the needs of those who are struggling in our society. This bill exacerbated the structural causes of inequality by shifting even more money to those at the top. The new administration needs to change this tax policy so that the government has the money it needs to address this time of crisis.

Finally, the new administration needs to stand with workers and organizers to ensure that large employers are paying fair wages, especially in the agricultural sector. This requires strengthening the labor laws, ensuring safety of workers and listening to the voices of those at the margins.

Such acts of solidarity must be grounded in the act of encounter. I urge the new administration to engage in a robust process of listening to the lived reality of our people around the country. Share with the nation what you hear. It is out of this listening that we can recover the sense of solidarity and commitment to the common good.

Just tax policies, just wages, just labor organizing are all the results of letting our hearts be broken open by the inequities around us. This shared brokenheartedness is the anchor for just legislation. I call on the Biden-Harris administration to ground its governance in the encounter with our people. This will create the opportunity to heal our nation.

This story appears in the Building a Common Future feature series. View the full series.
A version of this story appeared in the Jan 22-Feb 4, 2021 print issue under the headline: Tax, worker policies must engage politics of encounter.