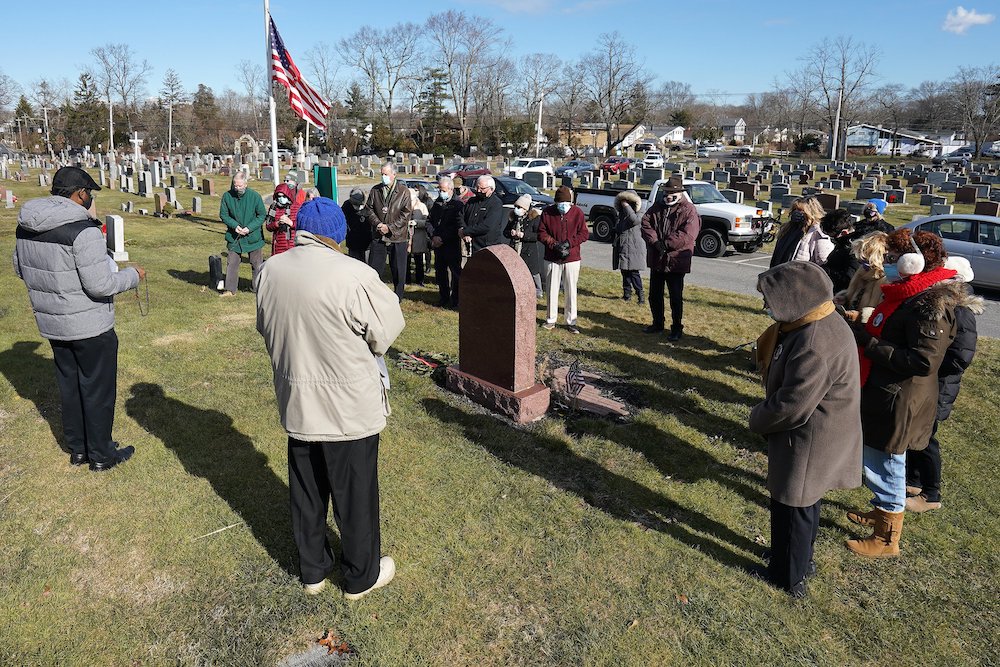 Pro-life advocates pray for the unborn during a prayer service at St. Patrick Parish Cemetery in Smithtown New York, Jan. 22, 2021, the 48th anniversary of the Supreme Court's landmark Roe v. Wade ruling legalizing abortion in the U.S. The gathering also marked the Day of Prayer for the Legal Protection of Unborn Children. (CNS/Gregory A. Shemitz)

As the second Catholic president of the United States, Joseph Biden is coming under much scrutiny for his faith practice. Nowhere is this scrutiny more intense than on his stance on abortion. While Biden's abortion politics have always been nuanced, they have altered significantly in recent years. He has not retracted his 2007 statement that he is personally opposed to abortion. But he appears to more fully embrace the Democratic policy of keeping abortion legal — which also happens to align with the majority preference of voters in the United States.

One need not be Catholic to understand that majority rule does not equate with right, of course. And Catholics are obligated to take magisterial teaching on moral issues as a guide. So how ought Catholics respond to the phenomenon of a president who practices his Catholicism publicly while simultaneously appearing to flout one of its moral tenets?

Many in the laity and the hierarchy would like to see Biden censured publicly, or even denied Communion. One response to this could be to say that the job of the president is not to institute a Catholic theocracy. It is not constitutional for a person of faith to force their beliefs on others. Moreover, it violates the integrity of the faith experience. Faith must be entered freely, not forced. What if a Muslim or Jewish president were to implement Muslim or Jewish beliefs as part of their platform, and ban the consumption of pork?

But this view is based on a category error in which moral beliefs and ritual practices are treated as identical. For Jews who keep kosher, the prohibition on pork is not a matter of objective morals. It has to do with identity in the Jewish community. Jews do not believe they should work for a world without pork, whereas Catholics believe that abortion is not simply forbidden to them as Catholics but always morally wrong. Additionally, the teaching on abortion can be distinguished from other moral teachings, such as that on contraception, as it is not only about the moral value of a personal choice but also about objective infringement on the rights of another.

Another possible response to those who want Biden censured: Church leaders routinely give a pass to practicing Catholic policymakers who disobey magisterial precepts on life issues, when their stance happens to align with right-wing ideologies. Figures such as former Attorney General William Barr and Supreme Court Justice Amy Coney Barrett are even lauded as icons of Catholic identity in spite of their gross disdain for the church's moral teachings. So why single Biden out for harassment?

But for consistent-life advocates who believe our laws should protect all lives, at all stages of life, whataboutism is not enough. Call them all out, they say. Demand that Barr and Barrett do better — and Biden, too.

So is this the message the Catholic faithful should send to our Catholic president, in these early days of his administration? Should we demand Biden to legislate against abortion?

While I value the perspective of my fellow whole-life advocates and highly regard their work, I have no plans to petition the Biden-Harris administration to make abortion illegal. And this is not because I favor abortion. It is because I do not believe that the most prudent, ethical or effective way of reducing abortion in our society is to withdraw supply. Rather, we need to reduce abortion demand.

If I could speak to President Biden, one practicing Catholic to another, I would talk to him about his vision of unity for the United States. Granted, unity is not a good unto itself. There's no merit in unifying in evil or by compromising with evil doers. And many pro-lifers would point to pro-choice advocates as evil. I believe this is misguided. I believe there is a way for pro-choice and anti-abortion advocates to work together.

Catholics who uphold magisterial teachings on morality ought to find common cause with pro-choice advocates because of our many shared goals of eliminating poverty, fighting structural racism, working for peace and protecting the environment. Moreover, the policies promoted by the Democratic Party are demonstrated to work to reduce abortion — as 48 years of culture war and misguided legislation from the right have not. And it is a mistake for pro-life Catholics to treat pro-choice concerns about personal privacy and bodily autonomy as irrelevant. Yes, we want a culture in which women choose life. Do we want one in which they are coerced into doing so? What kind of moral landscape would that be? 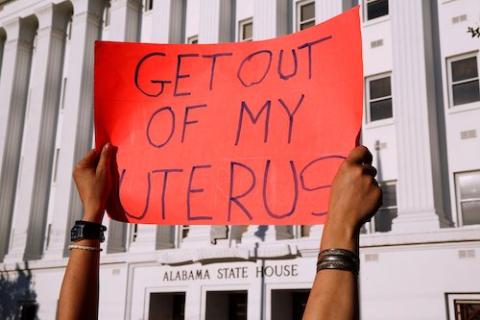 A demonstrator in front of the Alabama State House protests May 14, 2019, against an Alabama law banning nearly all abortions. (CNS/Reuters/Chris Aluka Berry)

I think Biden should articulate a consistent life ethic acknowledging the seriousness of the church's teaching on abortion — which he personally accepts — while also acknowledging the concerns of pro-choice leaders, such as Vice President Kamala Harris, who are motivated by genuine moral seriousness as well. He should pursue policies that are demonstrated, historically and globally, to reduce abortion, and call upon citizens to support these policies that will safeguard both the sanctity of life and the dignity of human choice. Rather than threatening women with punishment or placing them in impossible positions, we need to work collectively for a truly just society in which women are not driven to abortion because of fear, poverty or abuse.

I realize that creating such a consistent-life culture will not be easy. If Biden takes this route, he will face the difficult task of appealing to pro-choice citizens who (for good reason) associate criticism of abortion with far-right and anti-woman policies. This has always been a challenge for anti-abortion ethicists. Four years of Donald Trump in office have made the challenge far greater. Biden will also face the ire of pro-lifers who believe the only way to deal with abortion is to outlaw it.

Consistent-life ethicists and influencers have an obligation to work with Biden to craft a different way of thinking about living our Catholic faith in the public square. We need to articulate to church leaders and right-wing Catholics that being anti-abortion can take many forms, and that the form embraced by the GOP is defunct, a lie. What we called the pro-life movement, what many of us worked for and voted for, has failed to protect life. It has become a tool for right-wing authoritarianism.

We need to educate our fellow citizens so they understand that, as a politician, Biden and other Catholics in office see how legislation framed as protecting unborn life often ends up bringing about negative consequences, such as women being jailed for miscarriages, or even driving abortion rates up. The bishops keep insisting that we need to stop abortion by outlawing it. But if this isn't working, and is even making the situation worse, why continue to view theirs as the only viable way to end abortion?

At the same time, we need to help pro-choice leaders understand that opposition to abortion does not always come from misogyny or the desire to control women but can arise also from an ethos that values all life in all forms and believes it deserving of protection.

I would like President Biden to call Catholics and other citizens to work together to create a common future in which life is valued and protected, but also in which bodily coercion is repudiated. Is such a coalition possible at this fractured moment in our history? I don't know. But it is surely worth pursuing.

This story appears in the Building a Common Future feature series. View the full series.
A version of this story appeared in the Feb 19-March 4, 2021 print issue under the headline: Pro-life and pro-choice Catholics should work together.