Are you a Christian identity card carrier? 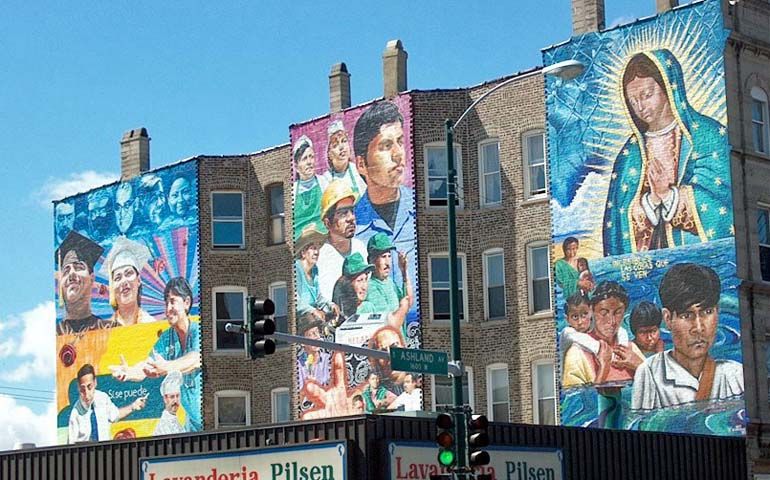 A mural in the Pilsen neighborhood in Chicago (Miguel Diaz)

Pope Francis recently released his much anticipated apostolic exhortation on the call to holiness in the modern world, Gaudete et Exsultate. This timely and thought-provoking reflection on Christian spirituality offers a signpost on how to become mystics of daily living, místicos y místicas de lo cotidiano, responding in particular human ways to God's presence in history and all of creation. The pope's reflection highlights long-held Christian beliefs that while holiness is always embodied in particular human faces, holiness entails communal and social belonging, which in turn requires communal and social responsibilities.

The genius of the pope's teaching lies in reminding us that saints, always and everywhere, embody the grace of God within their particular human circumstances. That means that while no person can ever be reduced to any single dimension of their human experience, including but not limited to gender, sexual orientation, race, ethnicity, religion and physical ability, the saints, in the fullness of their humanity, are ordinary persons, neighbors who reside next door, with or without documentation.

The Pope is Latin American and his teaching on holiness taps into the heart of Judeo-Christian traditions. It echoes the central concern of Latin American and U.S. Latino@ theologians who have underscored in their various writings God's preferential option for and presence among the poor and marginalized. As a Jesuit, his teaching on holiness is also deeply indebted to the incarnational spirituality of San Ignacio, which affirms the human capacity to discern God in all persons and things, even while avoiding the dangerous and idolatrous temptation to reduce God to any one person or thing.

In Pope Francis' mind, "the Beatitudes are like a Christian's identity card."

Saints learn how to distinguish, in their daily living, God from any person who speaks falsely or pretends to act in the name of God. St. Ignatius called this the practice of holy indifference. Saints, as Pope Francis observes, are not perfect human beings, and therefore, we need not get caught up with all the messiness and foibles of their humanity. Holiness entails a lifelong walking with God and neighbor. It never describes a chapter, but rather, the totality of a saint's life (22).

Are you a Christian identity card carrier? Are you aspiring to be holy, a saint in and of daily living? The driver's licenses, identity cards and passports we carry may provide access and affirm legal status, but they are not the type of "documentation" needed to identify us as citizens of the heavenly Jerusalem.  In Pope Francis' mind, "The Beatitudes are like a Christian's identity card" (63). Thus, unlike many of the earthly identity cards we carry, which generally only bear our individual picture, this Christian identity card represents our communal and relational history, bearing the faces of all those persons we have accompanied as neighbor in loving and just ways. Indeed, were such a card to be available, it would serve as a powerful reminder of the simple, familiar and yet profound eight building blocks that frame Christian ethics: solidarity with the poor, meekness and humility, compassion, a hunger and thirst for righteousness, seeing and acting with mercy, sowing peace, and a prophetic stance in the service of God's reign (65-94).

From the perspective of belonging to the church, being the bearer of a Christian identity card might remind us that those who are citizens of the city of God have journeyed into compassion, rejecting in their daily living and relations with their neighbors a rigid religiosity and excessive attention to rules, customs and ways of being in the world (58). Reason and human experiences, as Catholic tradition has upheld, are important tools to pose new "questions, doubts, inquiries" in order to prevent Christian teaching from becoming a "closed system" (44).

But it is clear that for Pope Francis, the thoughts and experiences of those on the periphery offer the best angle of vision from where to better understand, express and develop our Christian beliefs, practices and teachings. And as Pope Francis rightly cautions, ecclesial rules cannot be seen as a blueprint for understanding Christianity as a form of servitude (59). The Gospel is about the abundance of life, and life is dynamic, interdependent, diverse, complex and, yes, increasingly under threat in our earthly common home.

From the perspective of current U.S. socio-political contexts, this Christian identity card might invite us to put our Christian faith first and abandon the futile ideology of a false patriotism that puts "America" first at the expense of other peoples and nations. Our earthly and heavenly citizenships often exist in creative tension. God works within human history, in communal relations, and through human agency. Therefore, "we the People of the United States" cannot neglect our global responsibility related to our privilege, resources and power. And let's not mince words with "ifs or buts," for, as Pope Francis avers (97), the great criterion expressed in the final judgment of all peoples (Matthew 25:31-46) demands that we as a nation walk in solidarity with the tired, the poor, the huddled masses yearning to breathe free, the wretched refuse of our teeming shore.

And who might some of these next-door neighbors be? Are they undocumented immigrants, DACA students, the poor, LGBTQI, homeless and rejected youth in our cities, women that have suffered from sexual violence and harassment? Are they black lives that matter, brown and black persons often unjustly and disproportionally profiled and incarcerated, bodies that are physically disabled? Are they among the victims of the senseless and proliferating gun violence at presumed "safe" spaces like the Pulse nightclub, Marjory Stoneman Douglas High School or a local Waffle House?

Christianity needs la plaza to maintain its incarnational relevance. The plaza needs religiously motivated actions such as those commanded in the Beatitudes to enact transactions, policies and laws that humanize rather than oppress its citizens. The ordinary and daily concerns of the market square are not distractions to Christians, but rather, provide the necessary context from within which faith can be put into practice.  A single word answers the ancient question raised by Tertullian, circa A.D. 200: What has Athens to do with Jerusalem? Everything! In their daily lucha, in their struggle to address the concerns of the world, mystics come into being, men and women who seek God in their neighbors and all creation, and see God's face preferentially in the scraps of our frail humanity (61).

A version of this story appeared in the July 13-26, 2018 print issue under the headline: Do you have a Christian ID card? .

Column | Are you a Christian identity card carrier?

Assault-weapon ban will be tough, but it's worth it to protect life

Encounters with Mandela, the spiritual giant