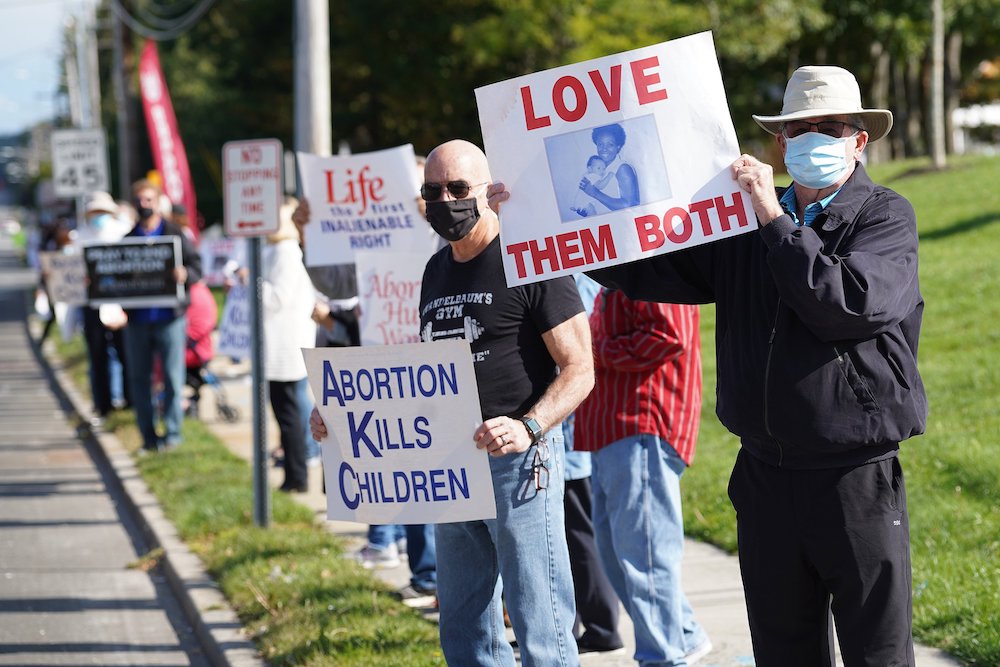 That I have to make this clear from the beginning is a point in fact: For the past 45 years, the public voice of the Catholic Church has been progressively limited to the pro-life cause, narrowly defined as resisting and overturning the laws that make abortions legal. This narrow focus was accompanied by the cooptation of this effort by one political party, supported by the agenda of the Christian right.

With just a few weeks to go until the presidential election, we are being challenged to face the fact that the pro-life position, as articulated and defended for years, has had disastrous consequences for the fullness of the Catholic vision of the common good in the public square.

For decades, focus on the right to life of the unborn has shaped the public and political will of many Christians. Undoubtedly, the number of abortions carried out any year is a staggering and painful reminder that we continue to be deeply immersed in a "culture of death." This phrase from St. John Paul II in Evangelium Vitae is worth reviewing: "it is possible to speak in a certain sense of a war of the powerful against the weak: a life which would require greater acceptance, love and care is considered useless, or held to be an intolerable burden, and is therefore rejected in one way or another" (12).

But this hyper focus, paired with the political manipulation of the issue, draws a false line in the sand and creates a litmus test for the role of people of faith in the public square that obscures the multiple ways in which we participate in a culture of death. Recent church teachings raise up a number of examples:

"Life" issues include all of these and more. Any threat to the inviolable dignity of the person confronts us with the culture of death. The pro-life movement's hyper focus on the dignity of the unborn, misappropriated and distorted for political gain, corrupted the ability of the church to be a voice for the fullness of the Catholic vision of the common good. El Paso Bishop Mark Seitz expresses it best in his thoughtful words published in America magazine:

We must repudiate any compromise of the church's witness through partisan alignment with single issue political strategies disconnected from an integral ethic of human life. The moral and ontological pre-eminence of human life is gravely undermined by narrow political stratagems corrosive of the common good. Our concern and advocacy for life must embrace all of the marginalized and excluded, or it will ring hollow.

The pro-life movement as it currently stands has lost its flavor. There is no denying that for decades many have continued to work tirelessly for the relief of women in crisis pregnancies and for poor families in addition to their advocacy for the unborn. This labor of good intentioned people of faith, however, has also been co-opted, misused and weaponized against a vision of the common good that requires us to seek to lift up the least of these in all their forms. It has become an obstacle to the careful and arduous task of reflecting, organizing and acting for the kinds of political, economic, cultural and social projects that bring life with dignity to all, not just the unborn.

The current moment in U.S. political life once again makes a spectacle of the church's advocacy for the marginalized and the weak by manipulating the pro-life label for political gain. This while we continue to witness unprecedented violations to human dignity and the common good. The global COVID-19 pandemic ravages our country with millions infected and over 212,000 dead from the disease. Staggering statistics that could have easily been prevented with basic public health measures.

Demonstrations across the nation beginning in May and continuing still lift up the names of black men and women killed at the hands of police in a nation that continues to criminalize black and brown bodies, disintegrate their communities and invisibilize the historical indignities against them. Migrants continue to be separated from their families, with migrant women being subject to unnecessary sterilization procedures without their consent (clearly a pro-life issue). The imprisoned continue to be executed at a rate not seen in over 30 years.

A Catholic vision of the common good does not draw hard boundaries around issues of life and the dismantling of the culture of death.

Certainly, all this calls for an alternative way of thinking. Without an attempt to enter into that way of thinking, what I am saying here will sound wildly unrealistic. On the other hand, if we accept the great principle that there are rights born of our inalienable human dignity, we can rise to the challenge of envisaging a new humanity. We can aspire to a world that provides land, housing and work for all. This is the true path of peace, not the senseless and myopic strategy of sowing fear and mistrust in the face of outside threats. (Fratelli Tutti, 127)

This "way of thinking" specifically proposes a vision counter to a hyper-polarized U.S. political and public life dominated by a debilitating and atrophied vision of the common good. In Fratelli Tutti, Pope Francis challenges our imaginations to uncover the fullness of the common good as shaped by the gospel parable of the "Good Samaritan" (Luke 10:25-37). "The parable clearly does not indulge in abstract moralizing, nor is its message merely social and ethical. It speaks to us of an essential and often forgotten aspect of our common humanity: We were created for a fulfillment that can only be found in love" (68).

The wisdom of Ecclesiastes reminds us "There is an appointed time for everything, and a time for every affair under the heavens" (3:1). Perish now the pro-life movement, in its subverted and corrupted mission, mangled by and tangled with political ideologies of hate, fear and death. Make space for the hard work of all persons of faith "who identify with the vulnerability of others, who reject the creation of a society of exclusion, and act instead as neighbors, lifting up and rehabilitating the fallen for the sake of the common good" (Fratelli Tutti, 67).

A version of this story appeared in the Oct 30-Nov 12, 2020 print issue under the headline: Hyper focus on abortion issue obscures call of common good.