Neighbors with nowhere to rest their heads 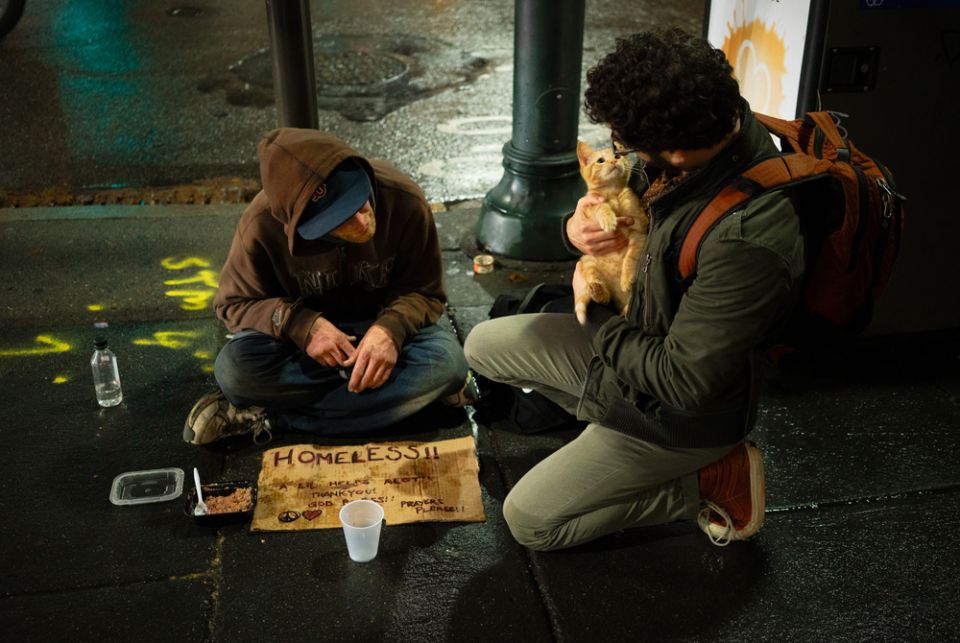 The pope often uses his annual address to the diplomatic corps in Rome to summarize insights learned from his apostolic visits and to paint, in broad strokes, what he perceives as global challenges. This year's speech was no exception. Some of the global issues he addresses directly relate to our own country.

Of course, as we might expect, in his January address, Pope Francis explicitly underscores as "particularly troubling" the recent conflict between the United States and Iran. He makes an appeal for all parties to respect international law and "keep alive the flame of dialogue and self-restraint." At the same time, other papal concerns may speak to our national contexts if we listen attentively. One distinct concern that I find particularly relevant in this papal address has to do with his comments on persons who face the life-threatening consequences of internal displacement.

In his address, the pope not only raises his concern for the poor, our common home, and refuges and migrants, but he also reflects upon and challenges us to consider the subject of internal human displacement. This subject carries the potential to open up new venues for conversation on a human condition that lacks adequate attention nationally and internationally.

Francis speaks to the issue in reference to his pastoral trip to Africa. He points out that "situations of conflict and humanitarian crises, aggravated by climate change, are increasing the number of displaced persons and affecting people already living in a state of dire poverty." The pope goes on to lament that nations lack proper policies and structures to address such internal displacement. Internationally speaking, there are few policies or structures in place that can adequately respond to the causes and effects of internal displacement. Thus, as he avers "internally displaced persons do not always receive the protection they deserve, and depend on the policies and response capabilities of the nations in which they find themselves." 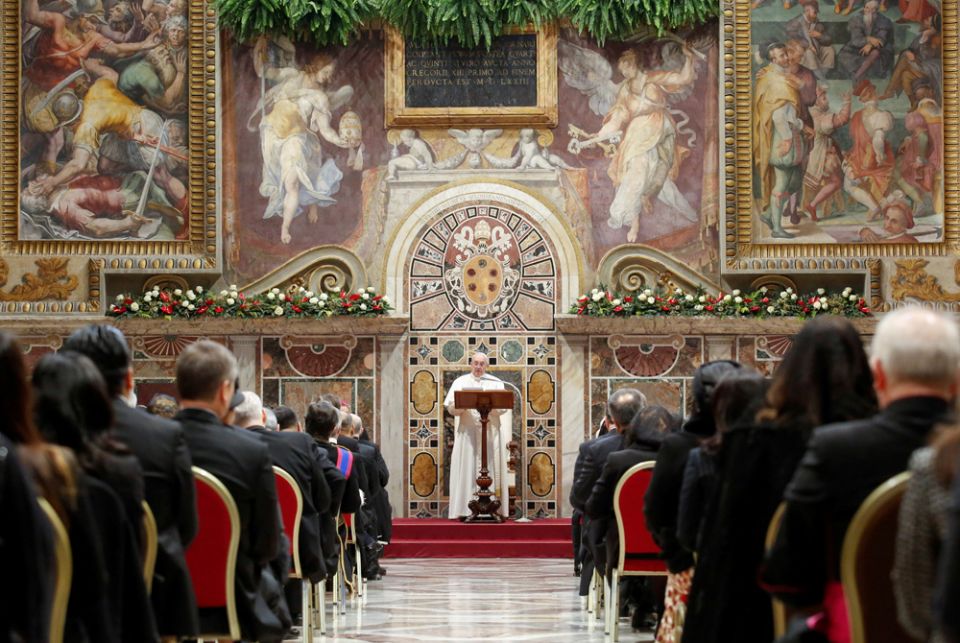 Pope Francis addresses diplomats accredited to the Holy See during an audience for the traditional exchange of new year's greetings in the Sala Regia Jan. 9 at the Vatican. (CNS/Remo Casilli, Reuters pool)

When we think of internally displaced persons we automatically think of victims of war and conflict or those suffering from displacement that results from natural disasters or the effects of climate changes. Closer to home, we might consider the plight of our Puerto Rican neighbors, recently displaced as a result of the devastating earthquake and its ongoing aftershocks. Many in Puerto Rico were still recovering from the impact of Hurricane Maria in 2017. But there is another group of persons, who presently also lack the resources and full protections necessary to live in a dignified way, or even survive. I'm referring to persons who are homeless, displaced within our own country, our neighborhoods, and our backyards.

Homelessness as we know, has multiple and often interrelated causes, attributed to personal, socioeconomic, geographical, racial cultural, gender, and religious factors. Statistics from the U.S. Department of Housing and Urban Development, or HUD, indicate that on a single night in 2019, nearly 568,000 people experienced homelessness and "more than one-third (37%) were in unsheltered locations such as on the street, in abandoned buildings, or in other places not suitable for human habitation."

While homelessness impacts persons from all walks of life, some populations are more vulnerable than others. For instance, in any given year, an estimated 4.2 million youth and young adults experience homelessness. Moreover, 40% of our nation's homeless youth are members of the LGBTQ community. LGBTQ persons, too often, may already be experiencing "displacement" from familial relationships. Those that come from socially marginalized racial and ethnic communities (e.g., black and Latinx) experience this kind of displacement at a much higher rate than the rest of their peers. They also suffer more regularly the physical and emotional threats to life that come with homelessness.

The lives of the LGBTQ young men and women I have interacted with in Chicago, who are members of this homeless body, certainly reflect this heartbreaking reality. Sadly, I must say, religion and religious perspectives play a contributing role in the displacement of these marginalized youth. Those who accompany LGBTQ youth made homeless observe, "The cause may be the family's poverty. Sometimes it is because of their parents' mental illness or drug addiction. But the reason we hear most frequently is religious rejection — parents whose religious beliefs cause them to reject their LGBTQ children."

Equally troubling is the number of homeless veterans. Veterans know what it is to be separated from their families. Many also endure physical and mental health consequences as a result of their service, a cost exacerbated for some by subsequent displacement as homeless persons in the streets of the land they protected. HUD estimates that while the numbers of veterans who are homeless has declined almost 50% in the past decade, nearly 40,000 veterans are homeless on an annual basis.

The National Coalition for Homeless Veterans, or NCHV, cautions, however, that about 1.4 million other veterans are "considered at risk of homelessness due to poverty, lack of support networks, and dismal living conditions in overcrowded or substandard housing." The demographics indicate that this part of the homeless population is majority white and male, disproportionately African American and Latinx, and the numbers of the young, while low, are increasing. In a nation dealing with heightened tensions at the prospect of war, it is worth keeping in mind some of the factors complicating homelessness among veterans, as identified by NCHV: "a large number of displaced and at-risk veterans live with lingering effects of post-traumatic stress disorder (PTSD) and substance abuse, which are compounded by a lack of family and social support networks. Additionally, military occupations and training are not always transferable to the civilian workforce, placing some veterans at a disadvantage when competing for employment."

During his address, Francis reminded the ambassadors of the 30th anniversary of the crumbling of the Berlin Wall, a symbol "emblematic of a culture of division that alienates people from one another." He invited the community of nations to reject the physical and relational walls the world has built. Instead of walls, he urges the human family to construct bridges of understanding, internationally and domestically. The internal displacement of persons around us speaks volumes about the social walls we have built to separate neighbors, especially from the most vulnerable among us. Walls always keep us from encountering the humanity of our neighbors. These walls shelter us from the suffering of our neighbors and keep us from understanding and challenging the violence they endure daily. Any form of violence against our neighbor, including the violence that characterizes the condition of homelessness, is unacceptable.

Just like war, unresolved domestic and social conflicts unleash violence against innocent populations. But in the face of this social challenge, will we tear down walls to enact new national policies and collaborate internationally to overcome homelessness and internal displacement in all of its forms? Will we wholeheartedly reject in word and deed the weaponizing of religion that causes so many of our youth to go homeless? Will we respond in kind to veterans who once risked their lives to defend our right to live in the safety and comfort of our homes?

Simply put, are we willing to become ambassadors of the one who had nowhere to rest his head for the sake of those who today have nowhere to rest their heads (Luke 9:58, 2 Corinthians 5:20)?

Column | Neighbors with nowhere to rest their heads