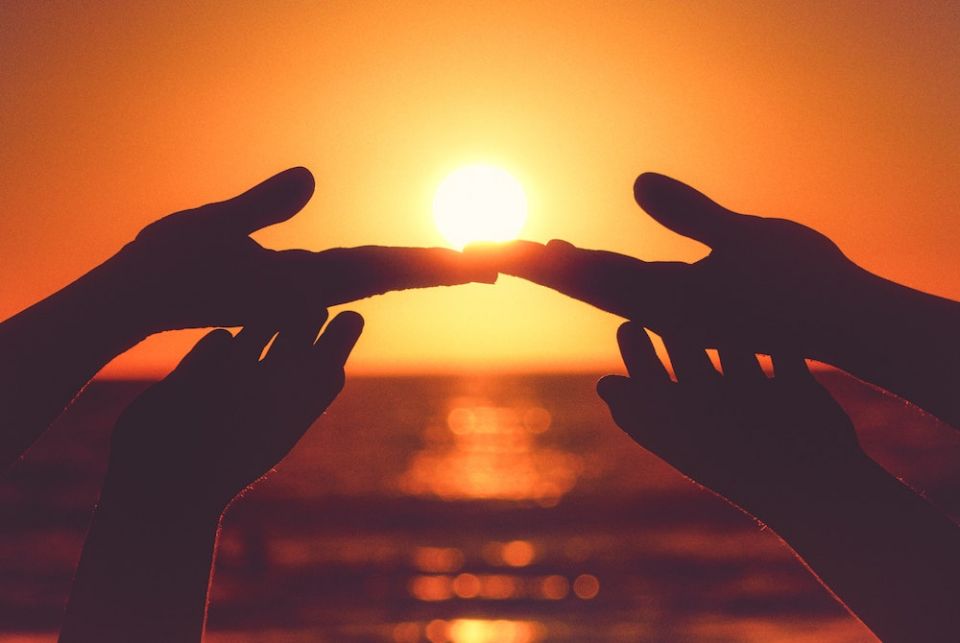 Highly regarded for their peacekeeping efforts, Dennis and Sheila Linn have lectured on healing, forgiveness and nonviolence in more than 60 countries. (Unsplash/Alonso Reyes)

Nonviolence makes sense. Or as peace activist John Dear puts it in one of his many statements quoted throughout The Two Hands of Yes and No: "We don't kill people who kill people to show people that killing people is wrong." 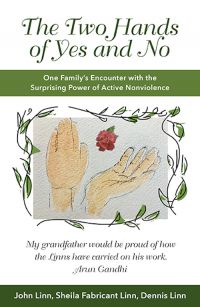 THE TWO HANDS OF YES AND NO: ONE FAMILY'S ENCOUNTER WITH THE SURPRISING POWER OF ACTIVE NONVIOLENCE
By John Linn, Sheila Fabricant Linn and Dennis Linn
192 pages; Orbis Books
$18.00

Highly regarded for their peacekeeping efforts, Dennis and Sheila Linn have lectured on healing, forgiveness and nonviolence in more than 60 countries. They have written 23 books.

In their latest, the Linns show that most ancient religions promoted the ideal of nonviolence. The Buddhist Emperor Ashoka, for example, who ruled from 273 to 232 B.C., renounced violence as a tool of war.

But the most illustrious example of nonviolence and perhaps the most misunderstood is found in the life of Jesus Christ. Many Christians emphasize his resurrection from the dead as opposed to his teachings about making peace, as in, "Blessed are the peacemakers, for they will be called children of God."

St. Augustine's doctrine of a just war doesn't help the cause of peacemaking, say the Linns. Nor does it help that Christianity has often practiced violence and misconstrued Jesus' teachings.

Turning the other cheek, as the Linns describe it, encompasses Jesus' teaching of nonviolent resistance. "It offers a third way between passivity and violence."

The rest of the passage — giving away one's garments and walking the extra mile — also exemplifies "nonviolent resistance to systemic humiliation and violence."

The Linns suggest there's a direct line running from the teachings of Jesus to the thoughts of 19th-century philosopher Henry David Thoreau to the efforts of Mahatma Gandhi and Martin Luther King Jr.

Both Gandhi and King exhorted people to disobey laws that went against their conscience. They were inspired by Thoreau's writings, teaching and example regarding civil disobedience and his thoughts concerning slavery and the mistreatment of Mexicans in the war with Mexico.

As the Linns look at nonviolence from the psychological, religious and historical vantage points, the book feels somewhat repetitive, but their practical advice is most effective — as seen in a reflection on the book's title: With one hand, you tell the bullies that you are not going to be a victim. With the other hand, you offer them a piece of pizza or a glass of wine. 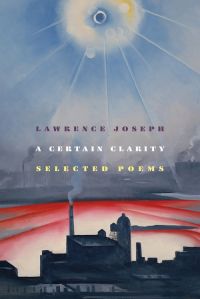 Speaking to God in the prologue poem, of A Certain Clarity, Selected Poems, Lawrence Joseph says he was appointed the poet of heaven, but his poetry failed to please, and he was pulled from the womb. He thereby entered a burning city in a violent country bent on destroying itself: Detroit, Michigan.

Still, Joseph writes in a poem, he sees "God adumbrations." These inform this collection from the earliest book — Shouting at No One (1983) to the latest, So Where Are We Now (2017). His poetry also contains frequent allusions to the Bible, the Mass, the Eucharist, and Catholic teachings — adding a sense of the sacred to the historical and personal events covered here.

Born in 1948, Joseph is an Eastern Rite Maronite and Melkite Catholic. He attended a Catholic elementary school and a Jesuit high school where he was influenced by the teachings of the Second Vatican Council. A poem mentions that he is the grandson of immigrants from Lebanon and Syria. 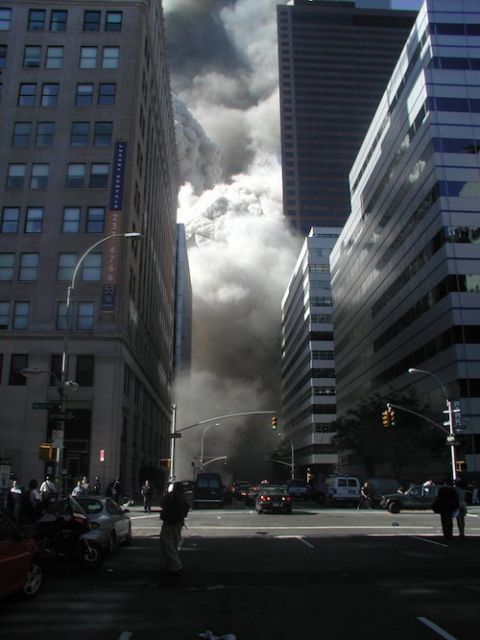 A cloud of dust and smoke is seen through the buildings along West Broadway in New York City, after the collapse of World Trade Center 2 on Sept. 11, 2001. (Wikimedia Commons/Hans Joachim Dudeck)

His poems include scenes of his grandmother going to Mass or reading an Arabic newspaper. He believes she and his parents send him messages via his dreams telling him to be careful. At the book's center is the poet's father, proprietor of Joseph's Market in Detroit, whose food store was looted and trashed. A few years later, he was shot in a robbery, which he survived.

Joseph became a lawyer and moved to New York City where he and his wife lived near the Twin Towers of the World Trade Center. They saw 9/11 firsthand with the sticks, stones, bricks, dust and debris flying like powder as well as people jumping out of windows. Joseph records the horror with graphic (sometimes too graphic) images of broken glass and fire.

In some poems, he talks informally to the divine, even arguing Job-like with him. Another poem speaks of a God, "who hates us so much." Still another refers to God "roaring inside me, afraid / to be alone." At times, Joseph writes between clenched teeth as his anger threatens to boil up onto the page, as in the poem "Syria" when he writes of the imagination being transmogrified "into circles of hatred, circles of vengeance, / and killing."

Often written as interior monologues, the poems use figures of speech, repetition and enjambment to underscore the irony which drives them. A poem which blends scenes from the Apocalypse with Joseph's own experience leads to this line: "Me? I'm only an accessory to particular images."

Michael McRay's latest book, I Am Not Your Enemy, offers an intriguingly written collection of stories from those who seek peaceful solutions to violence. He adds a kind of poetry to what could be a dry subject by noticing details regarding the places and persons he's visiting.

These include an Israeli soldier, two bereaved fathers, a theater director and a woman who has forgiven a man who killed her father. And then there's Abdullah, an aging Palestinian who considers McRay a son and who loves to recite Shakespeare. Abdullah is also a Christian and lives in Beit Sahour, a small town near Bethlehem. (The town's name means "house of vigilance" in Arabic.) 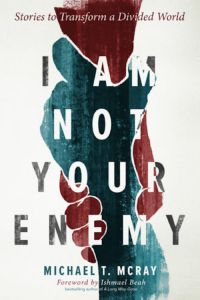 Some days, McRay says in a striking metaphor, "the sorrow drips from him as if he'd just swum in it." The most moving scene has Abdullah breaking into song about halfway into the book.

Abdullah lives in a house he built himself, and he's sitting on his porch on land that is occupied by Israeli soldiers. He's told McRay horror stories about Palestinians being mistreated and about their suffering and trauma. Then out of the blue, Abdullah begins singing.

As McRay looks at and listens to Abdullah sitting in his plastic chair, the elderly man begins singing a song from Shakespeare's "As You like It": "… come hither, come hither, / Here shall he see / No enemy / But winter and rough weather."

He ends his song with his own thoughts, "hope we shall see no enemy. … Believe me we want no enemy." 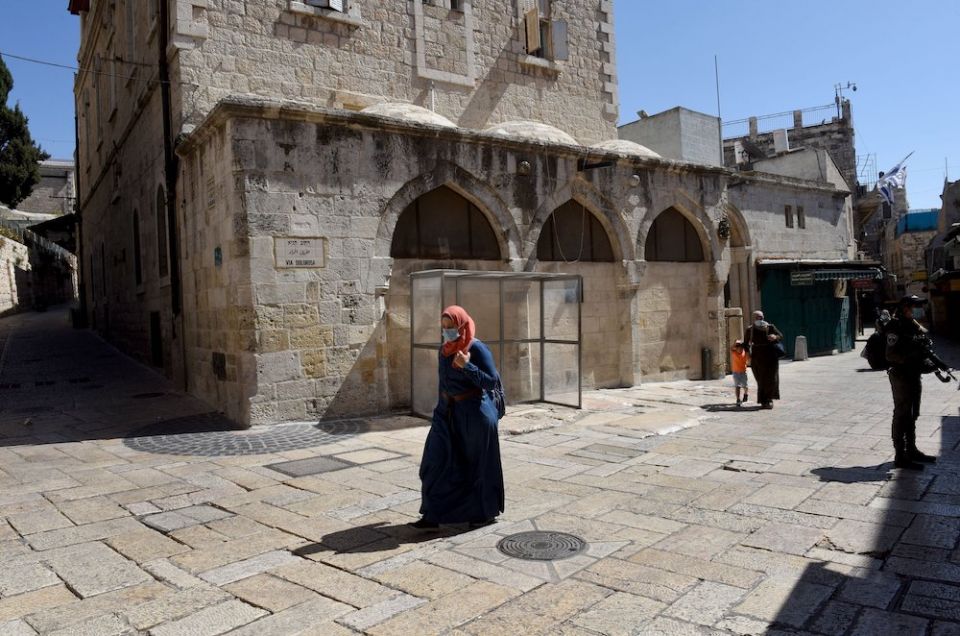 A Palestinian walks on the empty Via Dolorosa in the Old City of Jerusalem during a COVID-19 lockdown Oct. 6. (CNS/Debbie Hill)

[Diane Scharper is the author or editor of seven books, including Reading Lips and Other Ways to Overcome a Disability, winner of the Helen Keller Memoir Competition. She teaches memoir and poetry for the Johns Hopkins University Osher Program.]

My story as a Catholic conscientious objector