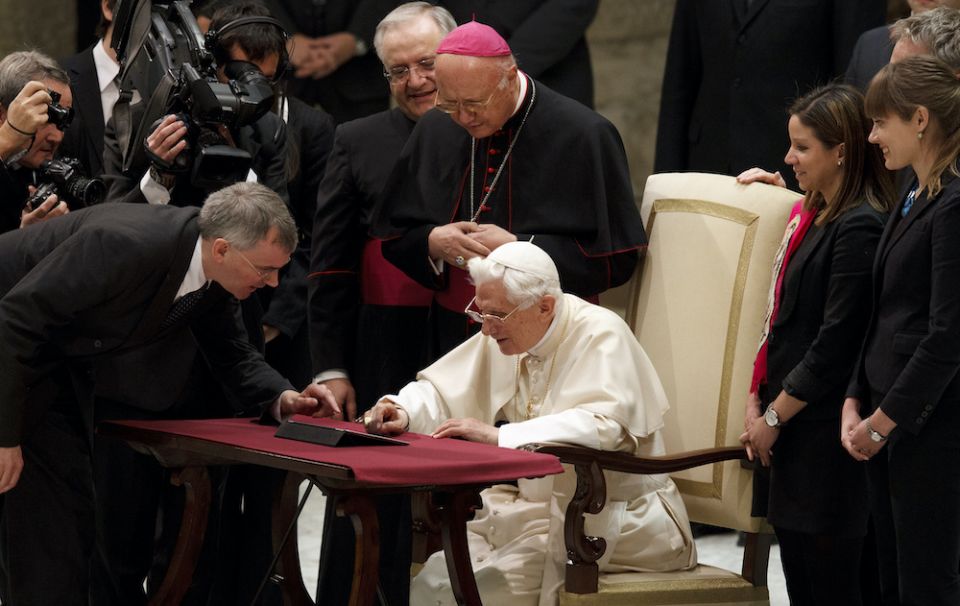 Pope Benedict XVI sends his first Twitter message during his general audience in Paul VI hall at the Vatican Dec. 12, 2012. He is assisted by Thaddeus Jones, left, of the Pontifical Council for Social Communications and Archbishop Claudio Celli, president of the council. At right are Katia Lopez-Hodoyan of Rome Reports, and Claire Diaz-Ortiz, manager of social innovation for Twitter. (CNS/Paul Haring)

President Donald Trump's recent conference call with Catholic leaders has shed light on the weakness of many of the Catholic hierarchy's understanding of the ethical dimension of social media. New York Cardinal Timothy Dolan justified the call as part of "the sacred enterprise of accompaniment and engagement and dialogue." He said that its purpose was pure — to protect the existence of Catholic schools. He seems to have overlooked an even greater cause — the defense of human dignity and the human right to truth.

Surely the Catholic leaders involved in that call knew enough to question the president's credibility. His tweets, press conferences and comments to reporters are peppered with half-truths, misinformation and outright lies. Unable to take responsibility for the consequences of his polarizing remarks, he assails those who disagree with him. Whether the president expects the public to believe everything he says or is deliberately planting seeds of discord and confusion is an open question, but the Pandora effect on the nation is indisputable.

In my mind, the central ethical question is not, however, about Trump's lies, but the failure of the many bishops to deal with the confusion and division generated by a communications technology that makes it more difficult to separate fact from fiction, truth from "fake news."

Ethics is not only about what is on the media (such as violence, pornography), but how media are used. In the Catholic tradition bishops are expected to lead. In the current political context, leadership requires that bishops help the faithful find the truth needed to form their consciences in a political context run amok with polarizing misinformation, conspiracy theories and outright obfuscation.

The Catholic leaders are the beneficiaries of a tradition of Catholic moral teaching on social communications.  Already in the 1940s, Pope Pius XII criticized authoritarian regimes for propagandizing information, in his Christmas radio message in 1944 and in an address to Catholic journalists in 1950. He argued that misuse of the communications media prevents the development of healthy public opinion and undermines legitimate political criticism. Citizens have a right to participate in building a society that is just and equitable. Access to truth is essential to this process.

In his teaching, Pius was drawing on two principles of Catholic teachings on social communication:

1 - The significance of media of social communication for a free society and the right and duty of the church to engage in the process of forming public opinion through social media (at that time radio, newspapers and magazines)

2 - The need to articulate Catholic social ethics in terms that facilitate evaluation of, and response to, the experience of media in day to day political, economic, social, and cultural life.

The very fact that Pius XII, having tried earlier to find a diplomatic way of dealing with totalitarian regimes, felt compelled to call the church to defend freedom of speech and denounce the misuse of communications media, modeled the responsibility of the church to speak out against abuse and misuse of communications media. Stunned by the devastating effects of the control of media by Nazis, fascists and communists, Pius was concerned about the health of democracy — fearful that it could run amok again without access to reliable information--for which it relied on the ethical practice of media-communication

The second principle is especially relevant to the duty of bishops to lead in today's world of ubiquitous computing and of uncontrolled messaging in every dimension of social communications. And it is not as if they lack either criteria or mandate to do this. Since Vatican II the church has gradually and apace with the exponential expansion of information communication technologies developed a set of practical norms for judging and responding to the media. 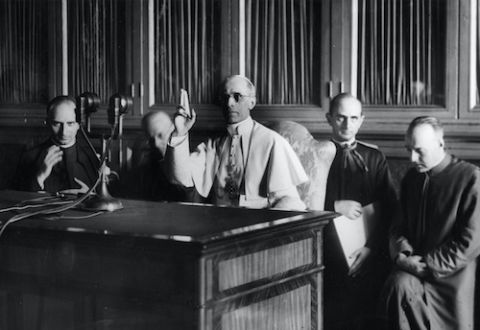 "Inter Mirifica" (Vatican II's decree on social communications) brought a new perspective to how the church views its relation to information-communication technologies. While the council could not have imagined the impact the internet would have on social communications, it clearly identified the ethical dimension of information-communication technologies. In establishing the Pontifical Commission on Social Communications, Pope Paul VI anticipated the world wide web of interconnected media and recognized that "close and mutual relations," of emerging technologies can create "problems of such importance as to affect not only culture, civility and public customs, but religion as well." Moreover, he specifically noted that bishops have a serious responsibility to take "assiduous care" to help the faithful navigate the impact the explosion of media technologies will have on their lives.

"Communio et Progressio "(1973), the seminal Second Vatican Council document for Catholic teaching on social communications, broadened the body of the church's social doctrine. Like other documents in which both the principles and obligations of social justice are spelled out, Communio et Proressio includes concern with political practices and structures. In terms of Church leadership, it insists that Bishops have a specific responsibility for promoting truth and defending dignity in the use of social media. They are called to promote those practices that support the formation of public opinion and moral consciousness in the church and which can serve as an antidote to distortions and manipulations of the truth in public life. Bishops must especially speak out against and name specific instances of "any propaganda that deliberately misrepresents the real situation, or that distorts men's [sic] minds with half-truths, selective reporting or serious omissions."

"Ethics in Communications (2000), issued by the Pontifical Council for Social Communications, specifically addressed the misuse of social media in politics, insisting that "communication must always be truthful, since truth is essential to individual liberty and authentic community among persons." It was unambiguous in its denunciation of "unscrupulous politicians who use the media for demagoguery and deception ... misrepresent their opponents and systemically distort and suppress the truth by propaganda and 'spin'." When politicians use social media to create "tensions and suspicions that set the stage for conflict" they cross the line of ethical behaviour.

Ethics in Internet (2002), another Pontifical Council for Social Communications document, was even more definite: politicians and their advisors violate truthfulness and fairness by misrepresenting their opponents and shrinking issues to sound bite dimensions." When a president speculates publicly about the "effectiveness" of medical treatments that are not only unproven but probably dangerous, he shows recklessness vis-à-vis truth and little regard for human life. Bishops need to have the courage to speak up and speak out when ever this happens.

Over the past half-century, the Vatican has built up its expertise and taken on a more engaged role in the public discussion of the media of social communications. Have the American bishops not kept up with this aspect of social justice? Our moral leaders must zero in on the process of communication, its structure, sources, and context. Leadership goes beyond making pronouncements on the content of the messages proliferating across the digital universe. "A merely censorious attitude on the part of the Church [is] neither sufficient nor appropriate (Pornography and Violence in the Communications Media, 1989)."

Ethical norms are to be acted on. bishops are expected to lead. In a context where Catholics are divided on social, economic, and cultural issues that are critical to the message and witness of the Catholic Church, Catholic leaders need to be hyper-sensitive to the messages they send not only by what they say, but by how they say it and what they do.

This time Trump's lie will matter

New book on truth is excellent resource during coronavirus pandemic