A Ukrainian academic on sabbatical experiences solidarity at Notre Dame

by Taras Dobko
Opinion
This article appears in the War in Ukraine feature series. View the full series. 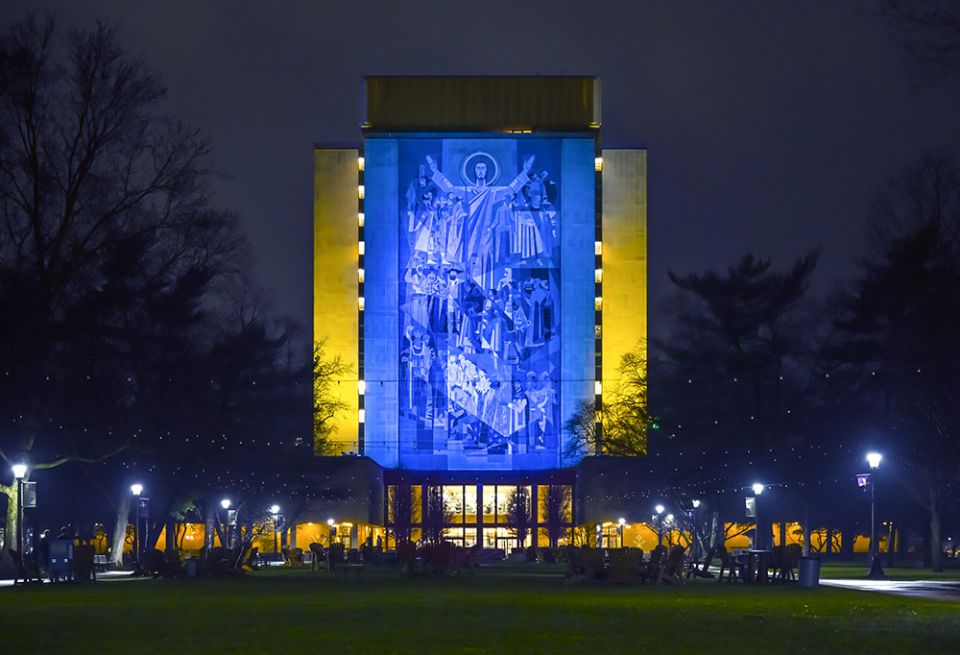 It is early March, and I am walking through Georgetown in Washington, D.C. I come across a campus of the Georgetown Visitation Preparatory School. I read the plate about its foundation in 1799 and its uninterrupted history for two centuries. Suddenly it occurs to me: I wish I could remember a single institution of learning in Ukraine that could enjoy at least 50 years of existence without any major disruption.

When Ukrainians hear about institutions celebrating centennials of their unbroken operation, we can hardly imagine what it is like. In Ukraine it is nothing short of a miracle. As soon as Ukraine grows a new generation of professionals — in business, engineering, arts, the church, in education — it is attacked by some imperial power looking to uproot my country's vitality. Then we must begin from scratch, again and again.

This is also a story of my own school, the Ukrainian Catholic University, or UCU. It was established in 1928 and shut down by the Soviets in 1944. Many of its faculty and students were arrested and perished in the Gulag. It was restarted in exile in 1963. Only with the 1991 fall of the Soviet Union did the university return to Ukraine.

Today UCU, in Lviv in Western Ukraine, is one of the nation's best universities, attracting high school graduates with the highest qualifying scores four years in a row. UCU's history is a story of imposed disruptions and inspired new beginnings. 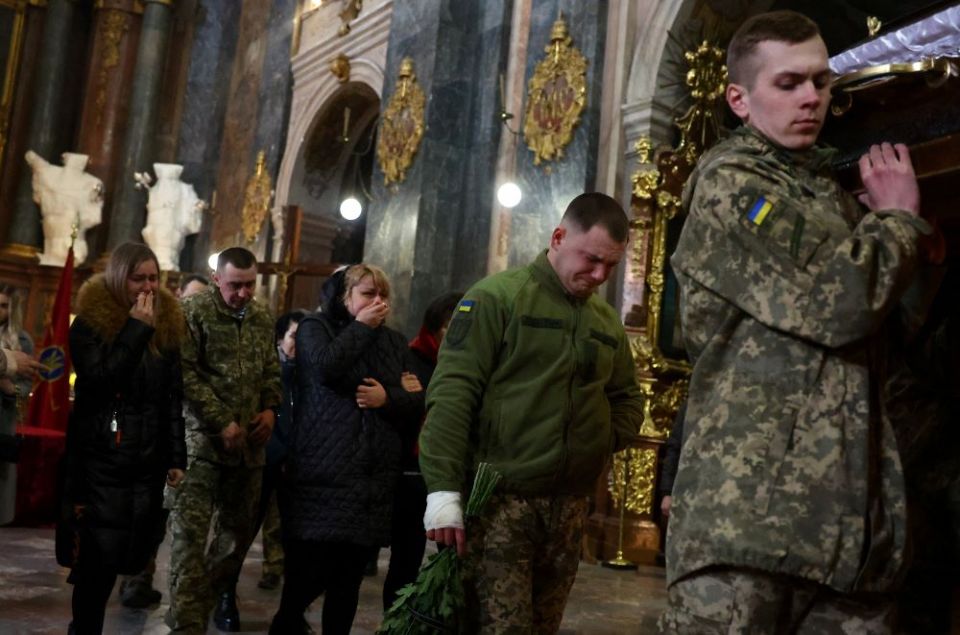 Family members and comrades mourn during the funeral of a fallen soldier at the Catholic Church of the Holy Apostles Peter and Paul in Lviv, Ukraine, March 16. The soldier was killed in a Russian rocket attack against a military base in Yavoriv. (CNS/Reuters/Kai Pfaffenbach)

This story is threatened once again by the recent Russian invasion. Every scenario, including evacuation, has been, and continues to be, on the UCU table. But there are reasons why UCU's story could be different this time.

Ukraine is not alone. The civilized world stands in solidarity with us.

I feel it from inside one of those special places of solidarity. Since January, I have been at the University of Notre Dame for my research project. What distinguishes Notre Dame in the present context is its long friendship with Ukraine. It was initiated by the university's Nanovic Institute for European Studies 18 years ago.

Unlike many other universities, which looked at Ukrainian affairs from the Russian perspective, Notre Dame has always approached Ukraine on the nation's own terms. No wonder that the university responded to the present predicament in an extraordinary fashion. Their response has been to inform, to educate and to pray.

At the start of the war, Notre Dame created a website dedicated to solidarity with Ukraine with daily updates, provided ND's faculty for many interviews on the situation and held prayer services and student rallies on campus. The university also provided a space for Ukrainian voices and their stories. A few online conversations between Notre Dame and UCU students helped Ukrainians to turn their anxiety into the energy of development. 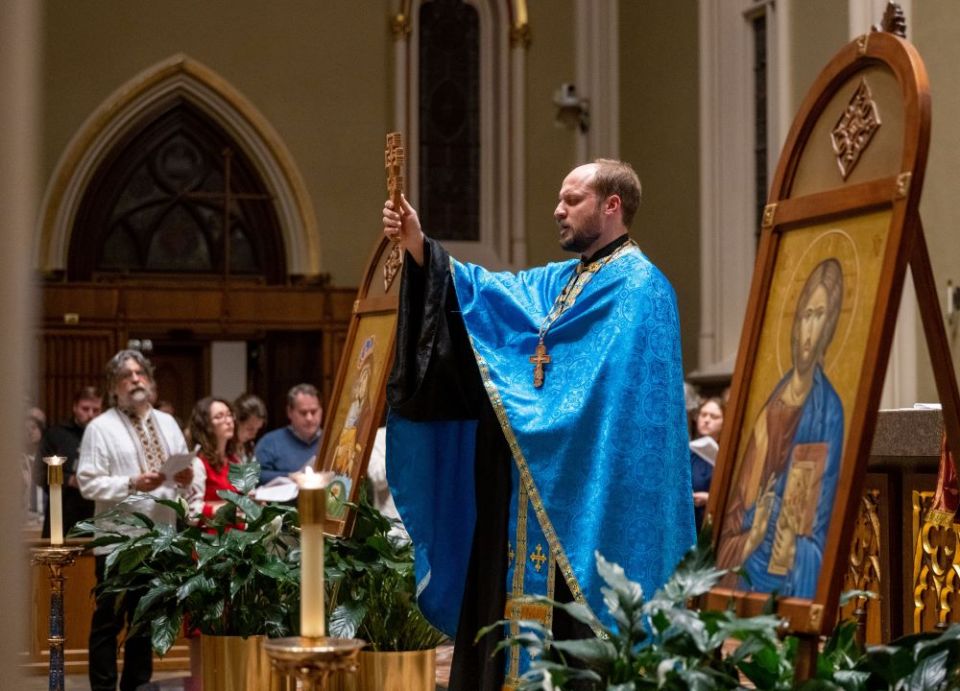 One of the most important missions of any university is to make people think critically in pursuit of truth. It is not easy to think during war. Any war is a defeat for reason.

So, it was a great relief for me to have an opportunity to engage in rich ongoing reflection at Notre Dame on the global perspectives of the war in Ukraine, the impact of Russian propaganda on media, the ways of civil resistance, the future of East European studies and other topics.

Often commentators turn to the biblical story of David and Goliath to describe the war waged by Russia against Ukraine. The Notre Dame community clearly acknowledged the spiritual dimension of Ukraine's resistance in the form of a Ukrainian Byzantine Molében for the Virgin Mary (not the traditional prayer service of the Roman rite regularly practiced at Notre Dame) in the Basilica of the Sacred Heart — attended by more than 1,000 students, faculty and staff on a freezing March night. It reflected what many Ukrainians hold as a conviction: It is God and not Putin who is the Lord of history. 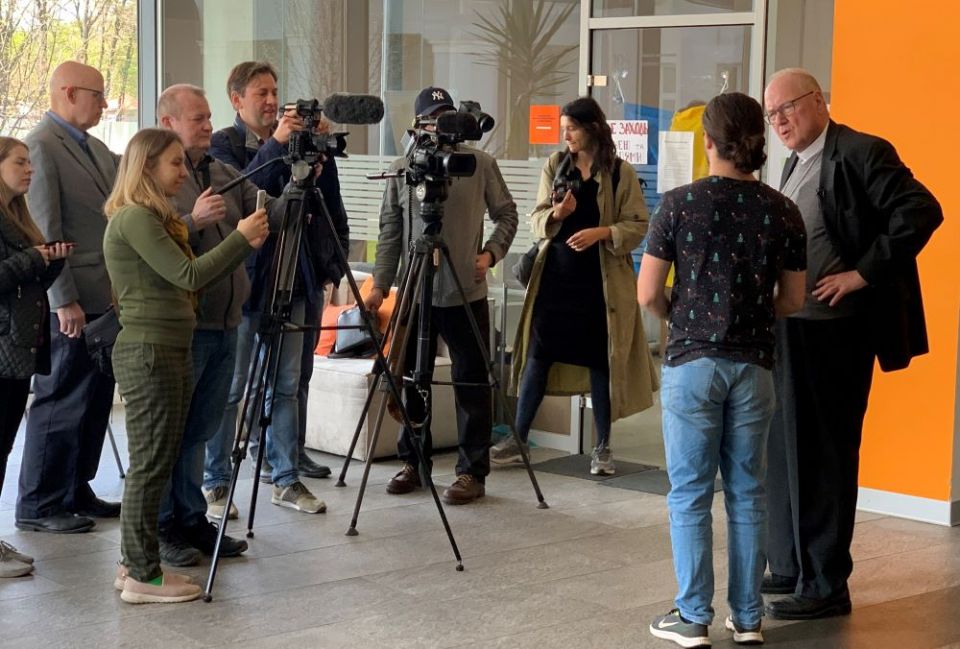 New York Cardinal Timothy M. Dolan, chairman of the Catholic Near East Welfare Association, meets with students at the Ukrainian Catholic University in Lviv, Ukraine, May 2. The students have formed a welcome center for people displaced during the Russian invasion. (CNS/Michael la Civita, courtesy CNEWA)

Notre Dame also started to think jointly with us about how they could best support whatever the future holds for UCU as a university. They are working on a comprehensive program of supporting UCU's students and scholars with opportunities for studies and research internships to help UCU prepare for its post-war mission in Ukraine. The thinking behind this program is governed by three principles: listening, flexibility and reciprocity.

It is tempting for a renowned top-tier institution like Notre Dame to know better what is needed for a small university like UCU. In contrast, Notre Dame's approach has been guided by a simple question: "How can we help you given your situation?" Ukraine will need specialists in the so-called "emerging fields" like refugee, urban and resilience studies to cope with the post-war challenges. It's important to build capacity and expertise in those fields as well as to establish collaborative teams for addressing these pressing issues.

UCU will direct its resources for reskilling programs for internally displaced people and war veterans, helping them with social reintegration and new starts to their lives. To form a new architecture of the democratic world, it will be necessary to work together on new projects of an ethical nature: war and resilience, trauma of communism, ideological reasons for the genocidal war, collective responsibility and national repentance, the analysis of roots and lessons of this devastating war and what could be done to prevent such wickedness in the future.

I wish I could spend my long-awaited sabbatical at Notre Dame working at my desk and in the library, catching up with reading new books, preparing new courses for my students back in Ukraine. All of this changed Feb. 24. But this time I know we are not alone and that whatever new strategies we design or books we write or students we teach, we do all this together in solidarity. 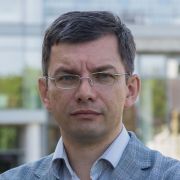 Taras Dobko is a visiting fellow in the Nanovic Institute for European Studies at the University of Notre Dame. He is the senior vice rector at Ukrainian Catholic University.