For where you stand, stand up 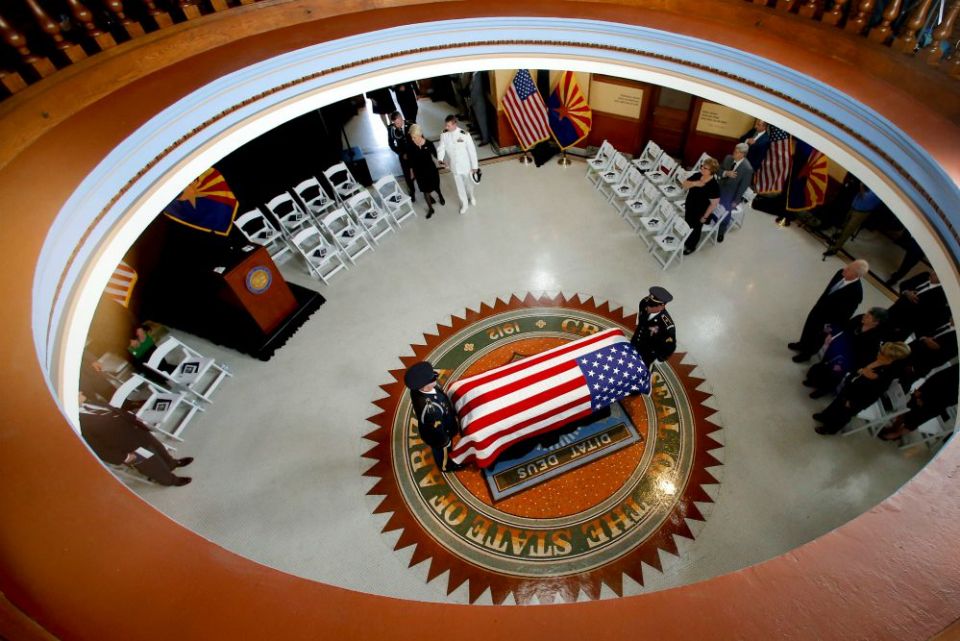 The Arizona National Guard carries the casket into the museum rotunda during an Aug. 29 memorial service for U.S. Sen. John McCain at the Arizona Capitol in Phoenix. (CNS/Pool via Reuters/Ross D. Franklin)

I haven't been writing much about the state of things in the United States these past months. From where I stand, there simply has been almost nothing really good to say. At least not about U.S. politics.

In politics there is little shining data to work with now: Nothing but more name calling of personal enemies for the 19th month in a row.

More bragging about nothing to brag about — like the dissolution of regulations designed to protect the planet of the future from the scars of advancing climate change.

More disdain for immigrant families begging for entry on our borders by families already broken by the poverty or violence of the countries they'd left.

More indictments of government officials who are swamping the political swamp with their own bodies.

And, of course, more bombast. More threats of force. More self-adulation and total disregard for either political traditions or national ideals like civil rights, a free press, and the rule of law.

On that day the country prepared to bury John McCain, Vietnam War vet, naval pilot, captain*, U.S. senator, and presidential nominee. On that day, in the National Cathedral in Washington, packed from one end of the middle aisle to the other, there — like daffodils that suddenly break out of the frozen earth in early spring — the America we'd all been trained to love and protect rose again for all to see.

America, pluralist but united, multi-colored and multi-cultural, was in bloom once more. The people of the country made out of many countries sat side by side — civil, contained, thoughtful — and spontaneously irrepressible at the memory of the kind of American greatness no one can expunge, no one can excise. American greatness had long ago, like the procession into that cathedral, become the national platform of every race and creed, every kind of laborer and every shade of legislator the country made its own. The America in the National Cathedral that day reclaimed its better self and rose from the dead again, right in front of our eyes.

I watched every minute of that funeral — cried through most of it — cheered the speakers, loved them all, dissolved at "Danny Boy" and sang every hymn out loud.

I don't think I'll ever forget the feeling of relief that came with seeing all of that beauty, all of that patriotism of ideals, all of that equality, all of that civil discourse, all of that decency again. And yet at the same time, I feared the passing of the era John McCain embodied. It's been so long gone already.

The necessary question, of course, is whether or not the America of John McCain can ever be more than a memory again. It's a dangerous question to ask. It comes too close to the marrow of the soul and demands another question: What have we trained this generation to aim for in life? A generation under the age of 18 has already been marked by the thuggery of this one. Day after day after day Twitter announces our divisive foreign policies, our threatening stance toward other countries, the demeaning of even our long-standing allies, and the attacks on political enemies. It has become our national language. Once we allow our legislators at our highest political level to go to war against human decency of all ilk — national, racial, sexual and political — on what grounds shall we build a new truce?

The distance between all of that and "Love your neighbor" is too wide a gulf to hope to bridge overnight.

One thing for sure, few if any young people will look consciously for role models of decency in political figures, least of all, in a divisive, indecent, demeaning presidency whose insulting language, sexism and racism grind American ideals to dust. Or worse, in a Congress that barely seems to see itself as anything other than partisan co-conspirators in the attack on American values.

And why would the young adults of this era discount looking for their heroes in its Congress people? Because they have grown up seeing so few.

Yet one glimmer of hope has flared up in our midst to remind us that the ideals that brought this country to its place in history as a protector of peace and judge of justice lives within us still: The state funeral of a man, who was never president but was forever the prophetic voice of what it means to be a patriot, brought to life again in us the echoes of what we were — and what we want to be.

In John McCain lay the essence of a system that worked despite its differences, regardless of its struggle with immigration laws, in the face of economic disparities, and for women and men alike.

From where I stand, the underlying message is clear: If John McCain's funeral proved anything, it proved that a country can remain its best self, even without a president to guide it. But that means, of course, that the rest of us must resolve that this era need not die. And respond accordingly. As he did.

*This article has been updated to correct that John McCain was not an admiral.

Column | For where you stand, stand up