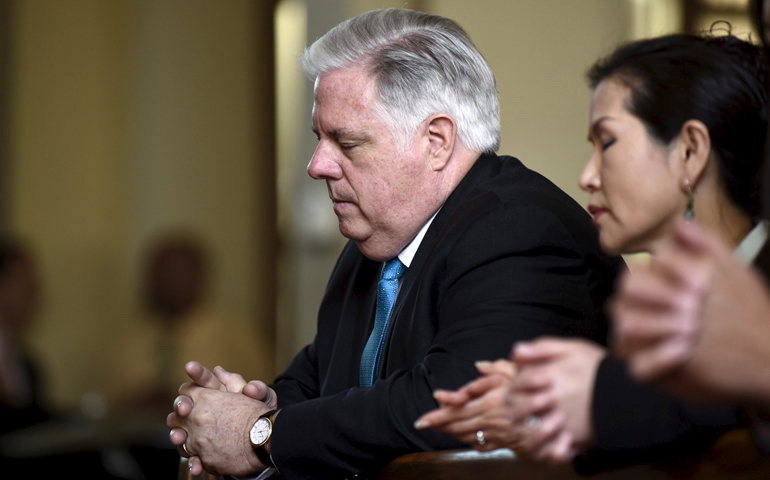 Prayer provides the strength and patience needed to love neighbors and will help Baltimoreans as they addresses the injustices that led to a night of rioting and looting, Archbishop William Lori of Baltimore said.

"Given my occupation, I think it's important to start every occasion this way," Lori said in response to a reporter's question Sunday, which was designated by Maryland Gov. Lawrence Hogan Jr. as a day of prayer and peace for Baltimore's healing.

The calls for prayer followed hours of rioting and looting the night of April 27-28 that rocked West Baltimore. The violence came in response to the death of Freddie Gray, who died April 19, a week after he was seriously injured while in police custody.

Joined by Hogan, his wife, Yumi, parishioners and a dozen news crews, Lori celebrated the day with a special Mass at St. Peter Claver Parish, located in Baltimore's Sandtown-Winchester neighborhood, where Gray lived, and which was the center of the violence.

Residents and parishioners were hopeful that change was in motion.

"This is a beginning process," said parishioner Jamie Johnson. "We all want the same thing -- peace. We want justice, peace and unity in the city."

Darlene Allen is a resident of East Baltimore, but became a parishioner of St. Peter Claver because, "the moment I stepped inside the church, I knew I belonged because of the sense of community."

"It was extremely hard to watch [the violence] on the news, because that is not the community I understand," she said. "This was more than an unfortunate death. The youth feel that nobody's listening to them. ... I pray that things are on the upswing."

Auxiliary Bishop Denis Madden celebrated Mass at St. Gregory the Great Parish, located near where Gray was initially arrested. At 5:15 p.m. Mass on Saturday at St. John the Evangelist Parish in Severna Park south of the city, Fr. Marc Lanoue, associate pastor, connected the fear referenced in Acts 9:26-31, the first reading of the day, to the situation.

"We can't always be in control, so we become fearful," Lanoue said. The accountability for which the people of Baltimore are asking "is an accountability we must demand of ourselves," he said.

At Our Lady of Hope Parish in suburban Dundalk, parishioners sang the "Prayer of St. Francis," the words of which took on special meaning in the wake of Gray's death and the subsequent riots:

In his homily, Fr. T. Austin Murphy Jr., pastor, said he noticed that some are asking the question, "What would Jesus do?" The question is flawed, he said, because Jesus is very much alive today. A better question, he said, is, "What is Jesus doing?"

As parishes prayed for peace and justice, Lori noted in his homily that St. Peter Claver's own pastor, Josephite Fr. Ray Bomberger, has been involved in that effort since the outset.

Traveling through West Baltimore on April 28, the morning after the violence, Lori said Bomberger was not to be found on the parish grounds.

"We were told we could find him across the street," the archbishop said, as parishioners erupted into a standing ovation, "and there he was, a lone figure, starting the cleaning-up process."

Lori remembered Gray as "not only as a symbol but a real person who was beset by challenges that face countless young people in this city every day."

The archbishop also said that Gray's death -- which has since resulted in charges filed against six Baltimore police officers -- indicated the presence of "structural sin."

"It is the sum of people's injustice or indifference that ends up creating a society where it is difficult, almost impossible, for so many people to flourish -- to lead lives that are happy, productive and secure," Lori said.

He told parishioners that before they can make "life-giving connections" with others, "we have to personally encounter the saving love of Jesus."

"The way that connection is made strong is prayer," the archbishop added. "We have to look into our own hearts to see what we're saying or doing to prolong injustice and indifference, to keep the walls of mistrust intact, or what we're failing to do, to so as to tear down those same walls."

At the conclusion of Mass, Raymond Kelly, a member of the St. Peter Claver pastoral council as well as president of the community group No Boundaries Coalition, noted the massive response of volunteers to the stricken area immediately following April 27.

"Help us find a way to bring faith-based education back to West Baltimore," he appealed to the archbishop. "We have to make sure generations of the future have that seed of faith planted in them so they can respond with the same donation and organization in their time of crisis."

After Mass, Hogan told reporters noted that the 3,000 National Guard soldiers in Baltimore were in the process of leaving the city.

"When I came into the city Monday night, it was in flames," he said. "Since then, I saw incredible acts of kindness. I saw neighbors helping neighbors."

He called the day of prayer "a great way to end the week."

Lori said he felt hope for the future because of the "abiding presence of the Lord who gathers his people and pours wisdom on us through the Holy Spirit."

"There are so many good residents, so much knowledge, so much expertise, and so much desire to make things right," he said.

[Erik​ Zygmont writes for the Catholic Review, newspaper of the Baltimore archdiocese.]