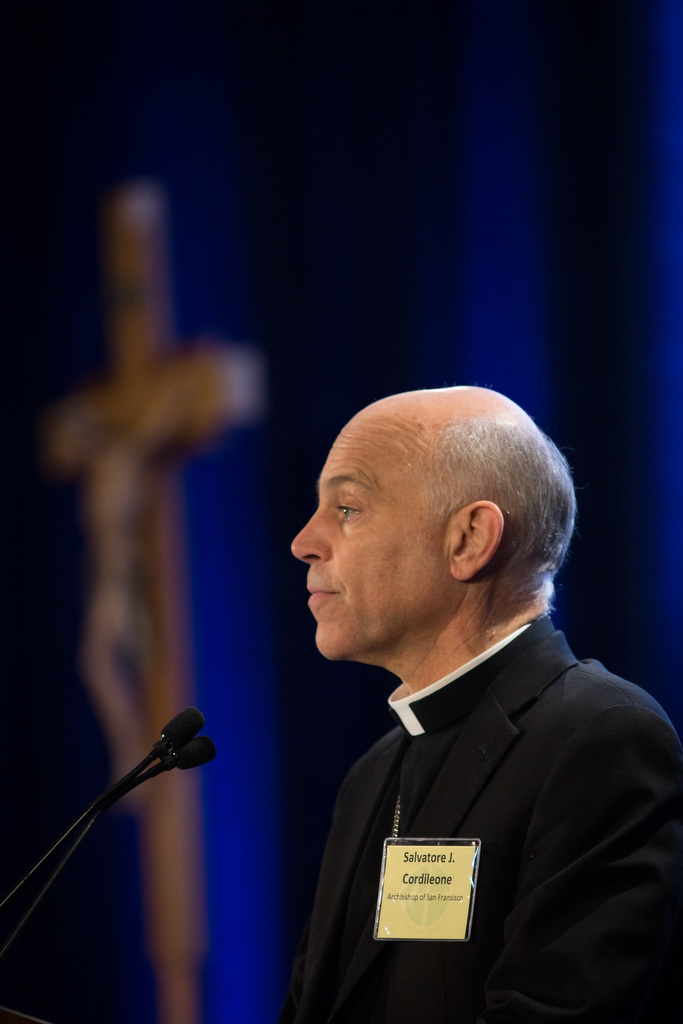 As the institution of marriage faces unprecedented challenges, the Catholic church continues to promote and defend marriage as being between one man and one woman, said Archbishop Salvatore Cordileone of San Francisco.

As chairman of the bishops' Subcommittee for the Promotion and Defense of Marriage, Cordileone gave bishops at their spring general assembly in St. Louis an update on the U.S. Supreme Court's impending decision whether same-sex marriage should be made legal nationwide as well as related public policy and the church's catechetical efforts.

The Supreme Court is considering two issues: whether the Constitution should require a state to license a civil marriage between two people of the same sex and whether it requires a state to recognize a same-sex marriage when it was lawfully licensed and performed in another state.

The court is expected to make a decision by the end of its session in late June.

"Nothing the court says can change what marriage truly is, and we will continue to promote and defend it," said Cordileone, who received sustained applause from his brother bishops at the end of his talk. "We may have to suffer this lie about marriage in the law, but we must not participate in it or keep silent about it."

"The importance of responding to this challenge with truth and compassion remains paramount," he later added.

Currently, 36 states, the District of Columbia and the U.S. territory of Guam recognize same-sex marriage. The status of same-sex marriage in a 37th state, Alabama, remains unclear because of conflicting state and federal rulings.

Those who advocate for the Catholic church's support of traditional marriage will be increasingly marginalized under the law and within society, Cordileone said. Depending on the rationale, they would be viewed as proponents of discrimination and targeted with discrimination themselves.

In this atmosphere, the church continues efforts to support public policy issues, including a version of the Marriage and Religious Freedom Act, which would prohibit the government from discriminating against those who act in accordance with a religious belief or moral conviction that marriage is the union between a man and woman. Protections would extend to areas including federal employment, contracts, grants and tax-exempt status.

The church also supports the federal Child Welfare Provider Inclusion Act, which would protect child welfare service providers against discrimination by the government in situations where workers refuse to place children in certain households against their religious beliefs.

The church is following legislation and executive action that would inject into federal law classifications of sexual orientation and gender identity.

"We see advances on what Pope Francis has referred to critically as 'gender theory' or 'gender ideology,' " Cordileone said. For example, the Occupational Safety and Health Administration issued a document on best practices in restroom access for transgender workers.

The Catholic church also teaches that any sexual activity outside of marriage is sinful.

The U.S. bishops' Fortnight for Freedom, which will take place June 21-July 4 to promote the importance of religious liberty, the World Meeting of Families in Philadelphia this September and the Synod of Bishops at the Vatican in October will serve as moments for catechesis, and to support families who are struggling as well as uphold strong families as positive examples.

"As the institution of marriage in our society faces unprecedented challenges, we humbly acknowledge our own responsibility and service to all and our total reliance on God's grace ... seeking God's face in all we encounter," Cordileone said.