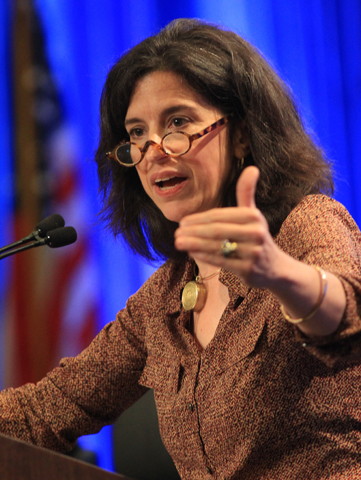 Closing the six hours of open meetings at their annual assembly Thursday, the nation's Catholic bishops heard from two speakers who outlined a stark image of the state of religious freedom and respect for marriage in U.S. society today.

Addressing the ties between evangelization and service to the poor, lawyer Helen Alvaré at one point said it was "getting difficult" for Catholics to partner with the U.S. government in providing social services because of laws like a federal mandate requiring coverage of contraceptive services in health care plans.

"We have always believed it has been eminently possible and good for us to partner with the public authority," Alvaré said. "Part of me worries some [people] at some levels of government are beginning to imagine a charitable services world where we are not a partner."

Catholics, she said, must "use every single tool in our disposal" to prevent that from happening.

Alvaré, a law professor at George Mason University who also serves as a consultor to the Pontifical Council for the Laity, spoke Thursday at the bishops' plenary assembly in New Orleans. After three and a half hours of deliberation on a number of topics Wednesday, the bishops devoted the last part of their meeting Thursday to talks from Alvaré and sociologist W. Bradford Wilcox.

Speaking in an NCR interview following Alvaré's talk, one bishop said while he understood that there are "real concerns" about the prelates' continuing ability to partner with the government, there is also a wider context.

"We need to take the wider historical narrative and realize we have always struggled with these questions," said Bishop Jaime Soto of Sacramento, Calif. "There was no perfect time" in relations between the government and church, he said, and Catholics cannot rely on a "sense of nostalgia" for a better time.

"How do you do ministries like health care or education without partnering with the state?" Soto asked.

Miami Archbishop Thomas Wenski echoed that question, saying Catholics should not halt efforts in the public sphere because obstacles appear in their path. He pointed to the long-held interpretation of separation of church and state that blocks government funding for Catholic schools.

"We've lived with that for several generations and we might have to live with other types of infringements into our freedom, but we have to continue on," he told NCR.

Alvaré's talk was dedicated to the topic of "the new evangelization and poverty," a reference to an initiative by Popes John Paul II and Benedict XVI to find new ways of expressing and attracting people to the Catholic faith.

Throughout her 40-minute address, Alvaré aimed to show connections between that effort and Pope Francis' emphasis on poverty, suggesting at one point that the U.S. bishops could better evangelize by emphasizing their work to serve those in need.

Alvaré also argued that an obstacle to evangelizing is the "virtually unlimited sexual expression" of modern society.

"The current fixation on sexual expression divorced from children provides us the opportunity and the imperative to dig deeper, to be brilliant and creative in order to answer a situation near the heart of each type of poverty: the loss of the understanding of the natural resource that is the relationship between the man and the woman," she said.

"The obscuring of the meaning and the goods provided by this relationship provokes an opportunity to articulate winsomely our beautiful and pivotal but also complex and underestimated teachings about how the male-female pair images God, models Christ's relationship with the church, and founds the school of love," she continued.

Wilcox's talk, dedicated to the topic of "marriage and the economy," likewise focused on the benefits of marriage. The sociologist, who is an associate professor of at the University of Virginia and directs the university's National Marriage Project, argued that there is a two-way correlation between marriage and poverty.

Citing sociological data that over the past few decades the poorest Americans have become the least likely to marry, Wilcox said, "There is a growing class divide in marriage in America."

"The United States is increasingly separate and unequal when it comes to marriage today," he said. Continuing to cite studies that say children who come from unmarried households are less likely to attend college or find economic success, Wilcox made a two-point argument.

Wilcox, who was raised by a single mother, said sociological data indicate that children from single-parent families "are less likely to flourish."

"Boys who grow up in a home with their married parents are much less likely to go to jail," he said. "Marriage matters for daughters. When dad is around ... her odds of becoming pregnant as a teenager are remarkably lower."

Wilcox also argued that unmarried cohabitation by parents leads to instability for children.

"The most risky place for our kids in this country is ... a single parent with an unrelated partner in the household," he said. "The safest place for our children when it comes to physical abuse, sexual abuse, is an intact, married family."

Earlier in the week, Wilcox became the center of controversy because of a Washington Post op-ed he co-authored that argued that the risk of physical abuse is less for women and children within a married home.

Critics of the column accused Wilcox and co-author Robin Fretwell Wilson of misusing data and ignoring studies that show violence rates drop alongside those for marriage. Wilcox told NCR in an interview Thursday that selection could play a role in the disparity: Women in good relationships advance toward marriage while those in bad marriages seek separation and divorce.

As for economic inequality, he said he didn't think marriage is "necessarily the primary factor" involved, citing other variables like taxation, technological advances and education, but the marriage divide is "one piece of the growing economic inequality story in America."

Following his talk, Wilcox took a number of questions from bishops on the floor of the meeting. Philadelphia Archbishop Charles Chaput asked why, if marriage is so valuable for economic success, same-sex marriage is being legalized in so many states.

"Most of the scientists would say that there's no difference ... between a stable same-sex family and a stable heterosexual family," replied Wilcox, noting that those scientists might consider stability the "key factor, not other issues that might relate to a child's well-being."

Yakima, Wash., Bishop Joseph Tyson asked why same-sex marriage is not considered by the studies Wilcox cited to be as dangerous as cohabitation.

"I think that the assumption ... is that when same-sex marriage is legalized and it is given cultural support, it will be as stable as heterosexual marriage," Wilcox replied.

"Is there data to back that?" Tyson asked.

"The data suggest that same-sex couples -- and this is really preliminary -- are more likely to have stable relationships when the legal regime is more supportive of their relationships," Wilcox replied.

The bishops continued with their meeting Thursday afternoon with closed-door executive sessions. They will meet together for prayer Friday before the official close of their assembly.