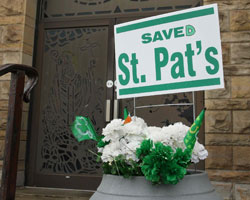 A "saved" sign is seen outside St. Patrick Church in Cleveland March 8. Closed in 2010, St. Pat's was among 27 churches shuttered in a reconfiguration plan under Bishop Richard G. Lennon. A Vatican congregation has overturned the closing of 13 of those c hurches and said they must be restored for worship. (CNS photo/William Rieter)

CLEVELAND -- Before a recent prayer service in a shuttered Catholic church in Holyoke, Mass., parishioner Victor Anop stood before 120 people and made an urgent announcement:

"The Vatican has ordered the bishop of Cleveland to reopen 13 closed churches."

"Everybody broke into applause," Anop said in a telephone interview. "People are still talking about it. What happened in Cleveland brings us hope."

Catholics fighting church closings across the U.S. are keeping their eyes on the Catholic Diocese of Cleveland, where Bishop Richard Lennon was overruled by the Vatican for not properly following church law and procedures on closing churches.

Copies of the decrees are circulating throughout the country and even in Canada. Anop and other parishioners of the closed Mater Dolorosa Catholic Church have been holding around-the-clock vigils inside their century-old sanctuary ever since their bishop ordered it closed last June.

In July, the Vatican's Congregation for the Clergy, the same panel that ordered the reopening of Cleveland's churches, said Mater Dolorosa should stay closed. But the Holyoke squatters appealed to the Vatican's supreme court and are awaiting a ruling.

Meanwhile, the news from Cleveland has reinvigorated their fight, Anop said. "Cleveland has led the way," he said. "And now the people of Cleveland need to keep working to get those churches open right away."

Phillip Penna, who is trying to reopen his church, Corpus Christi in North Bay, Ontario, about four hours north of Toronto, has read a couple of the Cleveland decrees.

"We think our bishop made similar errors," said Penna. "What's happening in Cleveland is monumental. It's really emboldened us. We're ready to go."

Many believe Rome is unhappy with U.S. bishops closing hundreds of churches over the last decade -- especially century-old structures that are architectural gems and elaborately appointed with priceless art. Many were old ethnic churches in inner-city neighborhoods.
"I'm wondering if Rome is saying, 'Enough is enough,'" said Michael Dunnigan, a canon lawyer at the St. Joseph Foundation, a parishioners advocacy group in San Antonio.

"I'm no mind reader," he said, "but I imagine that Vatican officials looking at America must wonder to themselves: 'How can the bishops of such a wealthy country close so many churches, abandon their great cities and exile to the suburbs the great Catholic witness in both flesh and stone?'"

Dunnigan, who has been representing parishioners for 14 years, said overturning a bishop's closing of a church was unheard of.

"We've been in the wilderness for ages with cases like this," he said. "It's been almost impossible to win, to prevail against a bishop. But now there's hope."

The 13 Cleveland churches -- out of 50 that Lennon closed between 2009 and 2010 in a finance-driven downsizing -- had appealed to the Congregation for the Clergy, saying they were self-sustaining parishes that should not be closed.

While the cases were under appeal, the diocese was prohibited from selling the properties, so they have been sitting empty and padlocked. Word got out March 7 that the Congregation ruled in favor of all 13 parishes.

"I couldn't believe it when I saw the news," said Joe Fuisz, a parishioner fighting to reopen St. Joseph Catholic Church in Bethlehem, Pa. "I thought, 'No, the press must be mistaken.'

"Up until now, we had no real success stories to look to. Now, going forward, people are looking to Cleveland."

Lennon has 60 days to appeal the reversals of his closing orders; the bishop said in a statement that his advisers were reviewing the rulings.

Peter Borre, a Boston activist who represents 24 parishioner groups in 11 dioceses throughout the country, said Lennon erred both in procedure and substance of church law when he "suppressed" parishes -- which means he dissolved them -- and shuttered the church buildings.

"This is a tectonic shift in Vatican parish policy," said Borre. "This is not just idiosyncrasies of a few odd cases here and there."

(Michael O'Malley writes for The Plain Dealer in Cleveland.)

Court throws out Milwaukee abuse claim because of previous settlement