Charleston's Emanuel AME Church reopens with prayer, praise and a call for change 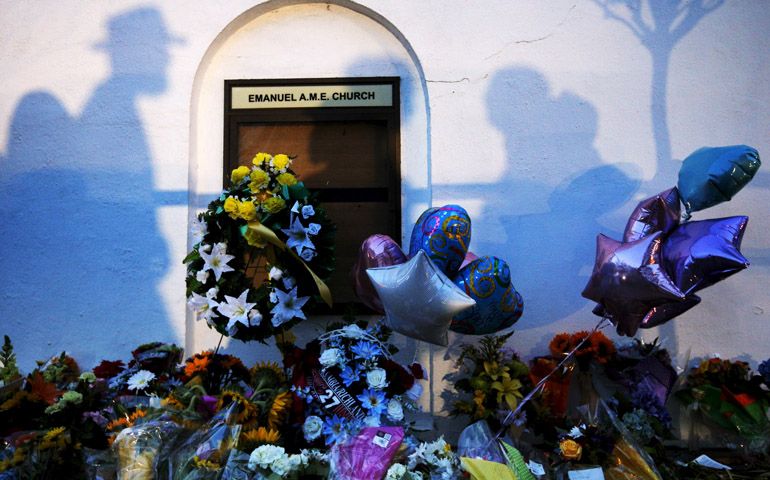 Mourners cast shadows on the wall of a makeshift memorial June 18 at the Emanuel African Methodist Episcopal Church in Charleston, S.C. (CNS/Reuters/Brian Snyder)

Charleston, S.C. — Hundreds packed the pews Sunday of Emanuel African Methodist Episcopal Church, readying themselves to bury nine beloved members and seek justice on their behalf as part of the church's activist tradition.

In an energetic and emotional service, the Rev. Norvel Goff assured those gathered that the victims, including the church's pastor and state senator the Rev. Clementa Pinckney, did not die in vain. Others echoed that sentiment, saying that while the city is preparing for funeral services, calls for reforms and social activism would also follow.

"We still believe that prayer changes things. Can I get a witness?" Goff said. The congregation, swelled with government and community leaders and South Carolina Gov. Nikki Haley and her family, responded with a rousing "Yes."

"We're going to be vigilant," Goff said as churchgoers swayed and clapped in response. "The blood of the Mother Emanuel nine requires us to work until not only justice in this case but for those living in the margin of life, those less fortunate than ourselves, that we stay on the battlefield until there's no more fight to be fought."

Dylann Roof, 21, is charged with opening fire on the group, discharging multiple shots into each victim during a Wednesday bible study, according to police affidavits. A white supremacist manifesto purportedly written by Roof to explain why he targeted the church says he had "no choice" but to target African-Americans, whom he derides as "stupid and violent."

The attack traumatized the mother and daughter of Charleston County Judge Daniel Martin Jr., who is the fourth generation of his family to attend the church. His 83-year-old mother left the church just an hour before the shooting and his 17-year-old daughter often helped Sharonda Coleman-Singleton, who died in the attack, pray with the church's youngest members. Neither woman could bring themselves to come to church Sunday.

"There are people who are terrorized by what happened," Martin, 52, said. "My daughter is struggling with the loss. She is very afraid to come back in the building right now. But time heals all wounds. When she is ready, we will have her come back."

Standing outside the church, Martin said he didn't want to talk about political issues like whether or not the Confederate flag should be flying at the South Carolina Capitol. Yet he hinted that after the victim's funerals, Emanuel AME -- one of the nation's most renowned black congregations -- would play a role in preventing such tragedies.

Emanuel is the oldest African Methodist Episcopal church in the South and is called "Mother Emanuel." The church has had its share of notable political moments. In 1822, it was investigated for its role in a planned slave revolt after one of its founders, Denmark Vesey, tried to organize a failed slave rebellion. In March 1909, Booker T. Washington spoke there, and in 1962, Martin Luther King Jr. and Wyatt T. Walker of the Southern Christian Leadership Conference called on church members to register and vote.

"This church has always been about resistance," he said. "When the time is right, you will hear from Emanuel and this community. Changes need to be made and after the grieving process has been completed, you will hear loudly and the voice of many that some things are going to have to change."

Goff, too, said he would focus on the victims' families and talk about reforms later. "I'm reminded that there are other challenges that face us, does not go unnoticed, does not mean we're unaware of the problems that many of us face not only in America but in South Carolina and Charleston," he said.

Willi Glee, 74, has been a member of Emanuel AME for decades and almost became one of Roof's victims. Glee left the church an hour and a half before the shooting happened, skipping bible study because he got hungry.

Until authorities released the victims' names, friends and family from all over the country called to check on Glee because they know he is a constant at the church. Sunday, he said having the service soon after the shooting sent a message.

"It said to me that this is our house and we should be able to come back to our house even after all this," Glee said.

Angie Smith, 47, a social worker who started attending Emanuel AME as a 7-year-old, agreed. She said she felt surprisingly calm and at peace when she walked into the church Sunday morning.

Since Wednesday's shooting, Smith said she has been crying constantly and trying to understand how such a thing could have happened. Goff's Sunday sermon helped put her mind at ease, made her feel less depressed and reminded her about the character of her fellow congregants, she said.

"We're all about uplifting people and doing the right thing," Smith said. "We wrap our arms around everyone. Despite the fact that there was someone who came in from the outside, we still open our arms to everyone to come into the church."

Smith, a black woman, added that she has been followed in some of Charleston's stores because of her race. She said she hopes the shooting will lead people to have frank discussions about how to break away from prejudices.

Lucinda Magwood, 60, of Johns Island, S.C., spent Sunday at Emanuel AME in remembrance of Ethel Lance, a shooting victim who was a friend of a friend. "Racism is still here, prominent in America in the 21st century," she said. "It's just a little bit more polished. It's not as ugly and vulgar as it used to be."

Glee has lived in Charleston for 38 years but experienced one of the most memorable episodes of racism in Connecticut. He said a woman declined to rent him an apartment because he was black.

"Racism is a disease," Glee said. "It's like water poured into the ground. It is everywhere. It will never go away because we keep feeding it. And, there are a lot of sick people."

In the face of racial inequality, forgiveness can wait

Removing the Confederate flag is a big deal, or maybe not such a big deal

Charleston church witnesses to a love stronger than death