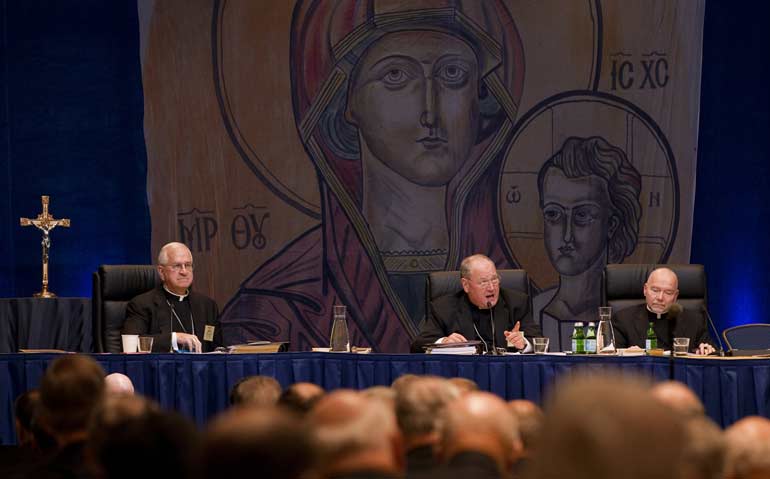 After sweeping setbacks to the hierarchy's agenda on Election Day, New York Cardinal Timothy Dolan on Monday (Nov. 12) told U.S. Catholic bishops that they must now examine their own failings, confess their sins and reform themselves if they hope to impact the wider culture.

"That's the way we become channels of a truly effective transformation of the world, through our own witness of a repentant heart," Dolan, president of the U.S. Conference of Catholic Bishops, told the 250 bishops gathered here for their annual meeting.

"The premier answer to the question'What's wrong with the world?' is not politics, the economy, secularism, sectarianism, globalization or global warming ... none of these, as significant as they are," Dolan said, citing many of the issues that have become favorite targets of the hierarchy.

Instead, Dolan said, quoting English writer and Catholic convert G.K. Chesterton, the answer is contained in two words: "I am."

The three-day meeting falls just a week after the re-election of President Barack Obama, whose policies on contraception coverage and gay rights mobilized the bishops in what was widely seen as an effort to elect Republican challenger Mitt Romney.

Many individual bishops spoke out in especially stark terms about the duty of Catholics not to vote for Obama, yet Obama won the Catholic vote 50-48 percent, according to exit polls.

In addition, voters in three states endorsed same-sex marriage initiatives and in another rejected an effort to ban same-sex marriage. All those votes represented major defeats for the bishops, who had invested prestige and millions of dollars in the campaigns.

On Monday, various speakers reiterated that they were not about to change their beliefs or policy positions, but they indicated they have to rethink their strategy. Dolan's approach in his presidential address was to repeatedly stress the theme of humility and the need for bishops to go to confession to renew themselves spiritually so that they can then preach their message more effectively.

Dolan's remarks marked a striking change of tone from the assertive and even aggressive rhetoric that the hierarchy deployed during the campaign season.

Now, with Obama back for another four years, the bishops recognize that they have an uphill task in trying to change the administration's mandate that requires employers to provide free contraception insurance coverage, and in halting the acceptance of gay rights.

They vowed to try to win their case in the courts, where possible, but said they will also try to rebuild bridges to the Obama administration.

"We have always maintained an openness to dialogue and that will continue," said Baltimore Archbishop William Lori, who led the hierarchy's campaign for religious freedom, which was the vehicle they used for battling the mandate and same-sex marriage.

Observers speculated that the change of tone may also reflect the presence at the meeting of Bishop Robert Finn of Kansas City, Mo. In September, Finn became the first bishop to be found guilty of covering up for a priest suspected of child abuse. He has not been disciplined by the Vatican nor have any bishops spoke out publicly or privately about his conviction, and that has opened the USCCB to criticism.

Yet in his address to the bishops right after Dolan spoke, Archbishop Carlo Maria Vigano, the Vatican's ambassador to the U.S., stressed the need for both priests and bishops to be holy men, and like Dolan he reminded the prelates of their "solemn obligation to be faithful to our call."

"We must continually undergo conversion ourselves, so that our people ... will have a renewed trust and confidence in us who are the messengers of the gospel," Vigano said. "We must continually beg God to forgive those who out of human weakness have caused great pain to others," he said, referring to the scandal of clergy abuse of children that has rocked the church for more than a decade.

Finn was never mentioned by name, and whether this change of tone will mean any concrete change in the bishops' political activism was unclear.

After the election, many Catholic leaders and liberal activists chided the bishops for appearing to bet everything on defeating Obama, and losing.

"The bishops ... need to put aside tactics that are counterproductive. Using excessive rhetoric, like comparing the president to Adolf Hitler or Joseph Stalin or accusing the administration of waging war on religion, makes it difficult to form coalitions to reach achievable goals," the Rev. Thomas Reese, a Jesuit and political scientist, wrote in a National Catholic Reporter column.

An editorial in Commonweal, a liberal lay-run Catholic magazine, suggested that "it is time for the bishops, like the Republican Party, to rethink their increasingly confrontational approach to divisive social and political questions. In light of Obama's re-election, a change in tone and style would be both gracious and shrewd."

Yet many conservatives said the bishops needed to speak out more forcefully than they did -- to double down rather than dial down.

"Lay Catholics need to have a showdown with their bishops over exactly what they (the bishops) can say in an election cycle because they are not saying enough," Deal Hudson, a longtime Republican activist who led efforts to rally Catholics for Romney in Pennsylvania, said the morning after the election. "This kind of nonsense has to stop."