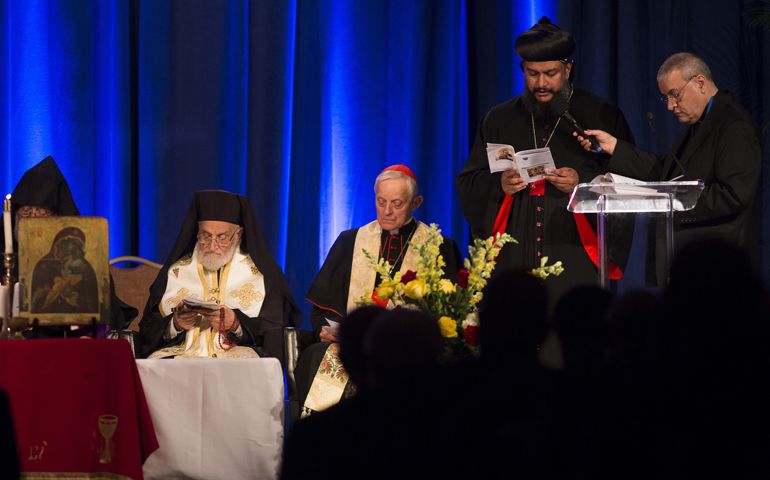 Archbishop Titus Yeldho of the Syriac Orthodox Church in North America leads a prayer during an prayer service Tuesday at the Omni Shoreham Hotel in Washington. (CNS/Tyler Orsburn)

Washington — Emphasizing that diversity does not preclude unity, nearly a thousand Christian leaders, politicians and laypeople gathered in Washington to launch a massive effort on behalf of the minority communities of the Middle East.

High-ranking church leaders representing Pope Francis and Coptic Orthodox Pope Tawadros II, patriarchs of Eastern churches, members of Congress and Christians in the diaspora came together in Washington for the inaugural In Defense of Christians summit. They set off for Capitol Hill on Wednesday with a message to U.S. lawmakers and policymakers: Christians and other minorities have an inherent right to live in the Middle East, where they have lived for centuries.

"Some in this city have asked why Christianity is vital to the Middle East, what's in it for America?" said Andrew Doran, executive director of In Defense of Christians, a new organization with the aim of shaping policy and heightening awareness of Christians in the Middle East. "The short answer is that Christian institutions provide social services, health care and education for millions throughout the region, and that this alone does more to prevent violent extremism than can be measured.

"Christians are not only the doctors, professors, lawyers, and businessmen in their communities; they are also the servants. Their very presence is a source of pluralism that has a moderating influence throughout the region. This is the answer for the policymaker," he said.

As President Barack Obama prepared to tell the nation Wednesday of his strategy against the Islamic State, the Christian leaders made clear they were not looking for military intervention from the U.S. alone.

Cardinal Leonardo Sandri, head of the Vatican Congregation for Eastern Churches, reiterated in his keynote address Tuesday what Pope Francis has said, that the United Nations must be "the place where decisions are made in which all peoples not only proclaim but also defend in practice, with adequate resolutions and actions, the dignity of the Christians in the Middle East, together with those who belong to every other minority."

Earlier, in a homily at an ecumenical prayer service, Maronite Bishop Gregory Mansour of Brooklyn, N.Y., reflected on the Gospel reading of the beatitudes, which he called "a way of life for Christians." He said even if a person was angry -- and those looking at recent events had a right to be angry -- it was hard to stay angry after listening to the reading.

He suggested to about 500 people gathered at Washington's Omni Shoreham Hotel that there were three ways to respond when Christians and other minorities are persecuted:

Mansour and other spoke of atrocities faced by Christians, Yezidis and other minorities at the hands of Islamic State militants, and the unity needed to fight such incidents.

"It is never, ever acceptable" that innocent people be forced from their homes, be forced to flee their land and "when they return to their home, their home would be booby-trapped, and they would open the door and be killed," Mansour said.

Angaelos, general bishop of the Coptic Orthodox Church of Alexandria and representative of Pope Tawadros, said the Universal Declaration of Human Rights' Article 18, which guarantees the right to freedom of thought and religion, was not something devised in the 20th century. Such rights came from "a loving God" who even allowed people to reject him.

"That right came with Adam and Eve," he told participants Wednesday.

"No one can possibly agree to a beheading," he said. No one can agree that humans are only "bargaining chips."

He said that lives "must not just become statistics on the six o'clock news" and pleaded with politicians, "Please do not use our brothers and sisters as bargaining chips."

At the National Press Club the previous day, Catholicos Aram of Cilicia, patriarch of the Armenian Apostolic Church, emphasized that the patriarchs had traveled to Washington "in defense of religious freedom, whether that is related to Christians or other minorities."

Syriac Catholic Patriarch Ignace Joseph III Younan told the media that the Christian leaders "are not against Islam; we are against the wrong way to profess Islam."

Robert A. Destro, director and professor of Law at the Columbus School of Law at The Catholic University of America, added that much of the Muslim world "is reeling" from the atrocities. He said what Islamic State fighters were doing "is a fight for the soul of Islam."

Washington Cardinal Donald Wuerl thanked the patriarchs "for the heroism of your ministry and life. Thank you for the unity of your ministry and what you bring to your people every day. No one knows the suffering of their people more than these leaders assembled here today."

Pope appoints 14 couples to attend Synod of Bishops on family

Memo to Chaput and Kaine: Stay in your lane!

Bishops debate: Where does doctrine end and pastoral practice begin?

Most US dioceses consult Catholics on family issues for fall synod