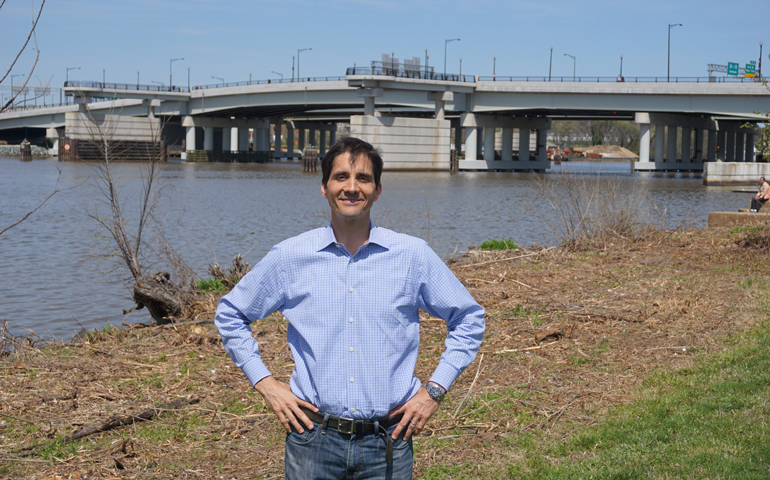 Pope Francis has repeatedly emphasized the need to "encounter" those at the edges of society and to craft inclusive rather than exclusive community. In February, he specifically exhorted those engaged "in political and economic projects" to take a broad view of life, one that would "truly serve the common good, and will give you strength in 'striving to increase the goods of this world and make them more accessible to all.' "

Few would argue with the aim of such noble ambition, but can it happen at a nuts-and-bolts level? Can political and economic projects actually take into account more than a bottom line? Public park developer Scott Kratz is working toward an answer.

Kratz is the 45-year-old director of the 11th Street Bridge Park, a seemingly quixotic but well-funded and elaborately designed effort to build an elevated public park over the Anacostia River, linking poor and rich parts of town in southeast Washington, D.C.

Constructed upon the pillars of an old city bridge, the park will connect the communities of affluent, powerful Capitol Hill with struggling Anacostia, a predominantly African-American neighborhood known for its high levels of crime and low economic opportunity.

For years, the Anacostia River, which runs between the two neighborhoods, has been an economic and racial dividing line, with the land "east of the river" characterized by a history of ecological and social injustice.

Now, that is beginning to change.

"We see this park as a place where both sides of the river can come together to be a physical and metaphorical bridge between two long-divided communities," Kratz says.

As he tells it, the idea for the bridge park came about four or five years ago, when he was working in museum management. He was having a discussion over breakfast about construction taking place down by the Anacostia River with the District of Columbia planning director at the time, Harriet Tregoning.

"She had this thought," Kratz said. "She saw a unique opportunity to transform old infrastructure into a new park."

Tregoning asked Kratz if he was interested in making the idea a reality. He said yes. She went to work lobbying the city government. He started volunteering -- meeting with nearby communities.

Two years later, Kratz left his job as vice president of education at the National Building Museum to work full time for Building Bridges Across the River, a nonprofit also known as THEARC, which now oversees the 11th Street Bridge Park. (Tregoning has since left the Office of Planning to work for the Department of Housing and Urban Development.)

The park is scheduled to open in 2018 at an estimated cost of nearly $35 million, $14.5 million of which the D.C. city government has agreed to pay*. A visually stunning piece of architecture, it will include outdoor performance spaces, playgrounds, fruit orchards, and classrooms to educate students about river systems. Kayaks and paddleboats will be available to the public.

According to its website, the park "promises to be a place unlike any other in Washington, D.C." -- a slice of community heaven, one that seeks to have a positive impact on the health of the river and its surrounding communities.

But it will also fit into a pattern of socioeconomic change sweeping the nation's capital. According to a February report in Governing magazine, Washington is the second-fastest gentrifying city in the country. Moreover, data provider Real Estate Business Intelligence told Bloomberg Business in March that Anacostia experienced the biggest surge in real estate value of any D.C. neighborhood in 2014 -- a 21 percent increase.

In viewing that reality, Kratz is not wearing rose-colored glasses.

"Signature parks, whether they're on rivers or otherwise, increase property values by 5 to 40 percent," he said. "So we've been spending a tremendous amount of time on the question: How do we ensure that the thousands of people who helped shape this project from the very beginning can be the ones who benefit from it?"

In addressing that question, Kratz has taken a two-pronged approach.

To date, he has held 450 community meetings with folks west and east of the river, listening to their concerns and asking what they would like to see in the bridge park.

A highly unusual move, many residents east of the river say.

"Scott did things very differently," said Brenda Richardson, a supporter of the project who served as deputy chief of staff to the late Mayor Marion Barry.

Barry, who also supported the project, represented Ward 8, where Anacostia is located.

"Scott came to council member Barry's office and told him what he was planning to do, and the council member said, 'You'll have to talk to the people and see what they want.' "

"Scott was inclusive in how he approached the project," says David Smith, a fifth-generation D.C. native and the executive director of the Pearl Coalition, an educational nonprofit constructing a replica schooner along the Anacostia River.

"I'm the civic association president of my community," Smith said. "Normally, we don't find out about anything until it's already happening, until the groundbreaking."

In talks with the surrounding communities, Kratz says he asked residents if the park was "something they really wanted."

Almost all were enthusiastic, he says. But many east-of-the-river folks expressed concern about economic opportunity.

"The issue of jobs came up again and again," Kratz said. "It wasn't framed by the G word, you know, gentrification. It was more about how we make sure that this investment will really benefit those nearby."

It was about a year ago, Kratz said, that "it became clear that we needed to be prescient about how this was going to impact the community in both positive and potentially negative ways."

Getting ahead of the economic "speculation" that often accompanies gentrification became "absolutely essential."

He began engaging government employees, think tank experts, as well as those in the nonprofit and business sectors to brainstorm ways to minimize displacement.

In February, he organized a half-day session with roughly 40 policy wonks and government workers to develop a set of recommendations regarding the questions of affordable housing, workforce development and small-business enterprise.

"Some of the ideas ranged from more practical to more ambitious," Kratz said. "Everyone realizes that the bridge park itself is not going to solve all the problems relating to affordable housing prices that exist in the city."

He added, "One of the real strengths of bringing this group together is to partner with folks who are already doing this kind of work in the city, and use the 11th Street Bridge Park as a real catalyst for this stuff."

For all the forward thinking surrounding the bridge park project, the problem of what Kratz calls "trust factor" persists -- particularly with residents east of the river.

For decades on end, the Anacostia River was where Washington dumped its waste and sited its pollution treatment centers, community leaders there say. The land to its east was where poor blacks were relocated during the disruptive and controversial process known as urban renewal.

The area has been abused ecologically as well as socially, says Jim Foster, president of the Anacostia Watershed Society. The society, located in Bladensburg, Md., works to clean the river and its connecting waterways.

"When [the city] needed to put a highway through, they just jammed a highway through. It didn't take a whole lot," Foster said. When they needed a regional sewage treatment plant to serve new communities in Montgomery County, Md., he said, they went to underserved communities along the river.

Kratz agrees. "There's a history of the groups coming in and making all sort of promises that never get realized," he said, "and that's led to distrust."

Today, with the specter of change on the horizon, that trust, or lack thereof, is being tested in new ways.

"When you look at the trust factor, and I'm just speaking generally, there's a tendency to say that when you see something new coming, it means the white people are coming," said Richardson, the ex-aide to Barry.

But within the community itself, "an interesting thing has happened as our community begins to change," she said. "There's this dichotomy that's been created between the haves and the have-nots. The haves are like, 'Oh my God, the park is a wonderful idea, let's do this.' The have-nots are saying, 'I'm trying to keep a roof over my head and food on my table, so what do I care about a new recreational park on a bridge?' "

Because it will lead to increased tourism and more foot traffic, and in turn, more business, the business community in Anacostia tends to be in favor of the park, says Duane Gautier, CEO of ARCH Development Corporation, an arts nonprofit located in Ward 8.

But when it comes to the rest of the community, "it's really a mixed bag," he said. "It's dependent on income and how long they've been in the community. ... In fact, you have a movement within the more affluent younger African-Americans moving into the community that is absolutely opposed to one more unit of low-income housing being pushed into Anacostia."

With the federal government ready to spend $3.7 billion to convert an old hospital in Anacostia into Department of Homeland Security headquarters, Smith of the Pearl Coalition wonders if the neighborhood still stands a chance at all.

The campus, known as St. Elizabeth's, will be "developed into a gated community," Smith said -- the businesses that will cater to it "will either serve the Pentagon, or government contractors, or tourists."

"It will be transient."

Indeed, as change approaches, many east-of-the-river leaders are digging deeper into the question of what it will take to ensure that the change is equitable.

Some believe community participation to be key.

Oramenta Newsome, director of the Washington office of the Local Initiatives Support Corporation, spoke of the need for honesty and clear vision.

"The first step, when you have a problem," she said, "is admitting it."

"To my knowledge, this park is one of the first instances I have seen where those doing the development have made a conscious, public statement acknowledging that gentrification and displacement and equitable development is an issue," Newsome said.

"That's usually not the case -- and it's not to say that people don't know it. It's just an 800-pound gorilla sitting in the middle of the room that nobody wants to talk about."

For his part, Kratz sees the effort in a moral light, what he calls a "tremendous responsibility."

"The most meaningful work throughout this entire process continues to be working with the community," he said. "Somebody was talking to me the other day about how this was 'Scott's bridge' and I shut that down immediately. I said, 'This is not Scott's bridge, this is the community's bridge.'

*This story has been updated to more accurately reflect the cost of the project.

A version of this story appeared in the April 24-May 7, 2015 print issue under the headline: Can a park bridge communities?.