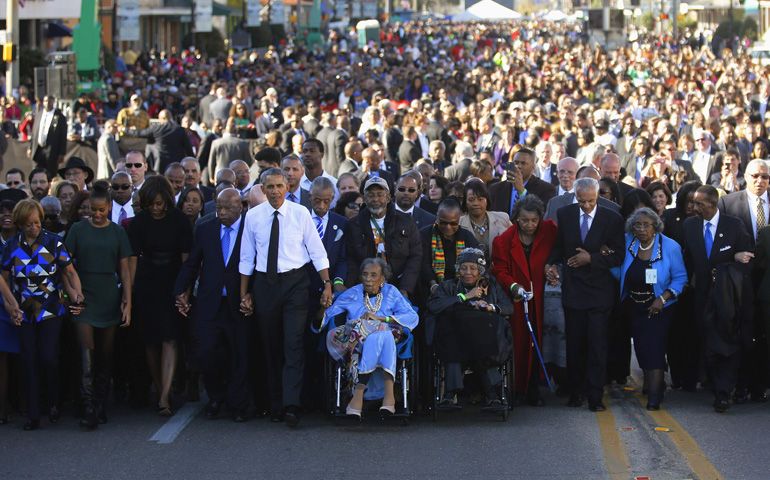 U.S. President Barack Obama and his family participate in a march across the Edmund Pettus Bridge on March 7 in Selma, Ala. (CNS/Reuters/Jonathan Ernst)

A strange and dissonant antiphony is at work in the culture between those remembering and celebrating the remarkable civil rights achievements of half a century ago and those who seem determined to undermine the progress.

How does one explain the soaring rhetoric of President Barack Obama in observance of Bloody Sunday having to compete with the circumstances that resulted in the blistering Justice Department report detailing systemic racism in Ferguson, Mo.?

How does one understand the observance of the Selma march, which led to the Voting Rights Act of 1965, with the gutting of that act in 2013 by the U.S. Supreme Court? Immediately, dozens of states began setting impediments to voting rights that largely affect people of color, the elderly and rural poor.

What has gone wrong when 50-year observances of the 1963 March on Washington and the consequent signing of the Civil Rights Act in 1964 are followed in 2015 by the ugliest of racial slurs chanted at one of our institutions of higher education?

The back-and-forth invites cynicism, a plus ça change view of the world. But things have changed, and the degree of backlash may itself be the best indicator of how much they have changed.

"Events like the Selma march," wrote Washington Post columnist Michael Gerson, "demonstrate that history is not bunk, or one damn thing after another, or any such cynical rot." He quoted what President Lyndon Johnson said a week after the march: "At times, history and fate meet at a single time in a single place to shape a turning point in man's unending search for freedom."

Gerson continued: "America was fortunate, 50 years after Bloody Sunday, to have Obama appeal to the nation's moral imagination."

Obama, in his speech memorializing the original march, said, "In one afternoon 50 years ago, so much of our turbulent history -- the stain of slavery and anguish of civil war, the yoke of segregation and tyranny of Jim Crow, the death of four little girls in Birmingham, and the dream of a Baptist preacher -- all that history met on this bridge. It was not a clash of armies but a clash of wills, a contest to determine the true meaning of America."

The true meaning of America is tested anew generation to generation, and this time is no exception.

The WASPish presumptions that undergirded 200 years of cultural cohesion are fading under the pressure of an unprecedented pluralism -- non-European, non-Christian and increasingly nonwhite. To some, the enormous shifts underway are threatening.

It doesn't take a degree in sociology to understand what such dramatic demographic shifts portend for the future. One either embraces diversity as a remarkable product of the American experiment in pluralism, or one rebels against the inevitable change.

The clash of wills over what type of country America will be has been as much a part of our legacy as our celebration of independence. For the most part, the ongoing struggle has resolved in the direction of our nobler aspirations. Racism has not been banished forever, of course, but as Obama -- a symbol himself of our capability for change -- noted at the Edmund Pettus Bridge:

"We do a disservice to the cause of justice by intimating that bias and discrimination are immutable, that racial division is inherent in America. If you think nothing's changed in the past 50 years, ask somebody who lived through the Selma or Chicago or Los Angeles of the 1950s. Ask the female CEO who once might have been assigned to the secretarial pool if nothing's changed. Ask your gay friend if it's easier to be out and proud in America now than it was 30 years ago."

Most of the country was appalled at what happened in Ferguson, and a thorough housecleaning is underway. The president of the University of Oklahoma acted swiftly, and the rest of the student body made it unmistakably clear that they would not tolerate the racist rants of a sick fraternity culture.

Obama, despite the deranged reaction of some on the fringe, was elected president, twice.

Occasionally, the competing choirs find themselves on the same page and make sweet music.

Editorial | Editorial: Sweet music, despite our dissonance on race