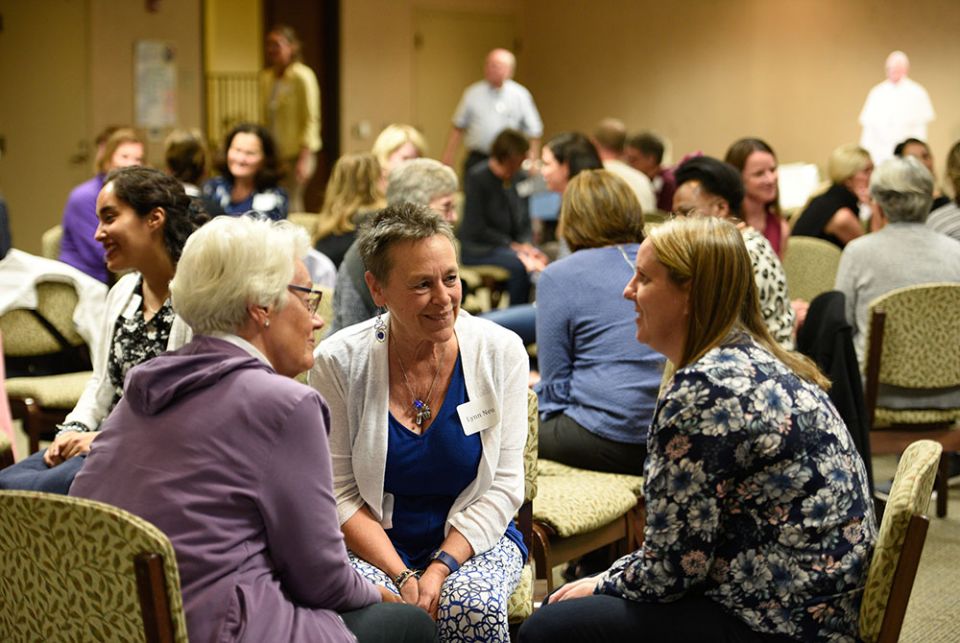 Small groups discuss their ideas and experiences as Catholic women in the Diocese of San Diego during the first Future of Faith event on Nov 4, 2019. Approximately 100 women from throughout the diocese attended the gathering. (Katie Gonzalez)

The 2018 Pennsylvania grand jury report on clergy sex abuse sent shock waves through the U.S. Catholic Church. For Bridget Gramme, the moment felt like a "call to women" to improve the church.

"I'm a cradle Catholic, it's my community and my identity and my kids go to Catholic schools," Gramme said. "It's something we really believe in and the community is so important to us. Maybe it's time we step it up and not just sit around and let these things happen."

Gramme is an attorney and member of the advisory board of the Frances G. Harpst Center for Catholic Thought and Culture at the University of San Diego.

Along with Catholic professionals involved in a variety of ministries, Gramme formed a planning team with the goal of healing the church by highlighting the voices of women and youth.

This idea developed into a series called "Future of Faith," which resulted in three proposals designed to elevate women's voices in the diocese. Those proposals include forming a speakers bureau of women, an all-women advisory council to the bishop and a diocesan synod on women's issues.

The first event in the Future of Faith series took place in November 2019, gathering approximately 100 women from the San Diego Diocese who were invited to speak about their experiences in the church. 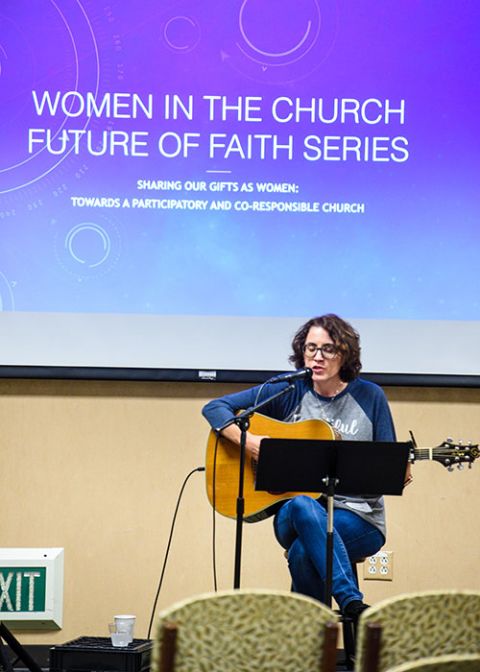 The gathering included a diverse range of women in age, ethnicity and political views, according to Gramme. It began with an opening grounding ceremony with music by Sarah Hart, and led into large-group and small-group discussions, where participants were invited to share their ideas and experiences.

"It was a good feeling in the room. It was very loving and people were coming from different places but all just kind of there because they love the church and they want to see it thrive in the best possible way," Gramme said. "Some women were calling for women to be priests right that minute, and some that were much more conservative about it, but it was all very accepting."

Maureen Day is a member of the Future of Faith planning team and assistant professor of religion and society at the University of San Diego's Franciscan School of Theology. Day said the purpose of the first session was to learn "What's going on in our diocese with women? Where are we feeling heard and celebrated? And where do we feel our voices are left out?"

Recent studies on American Catholicism by William V. D'Antonio show that Catholic women's religiosity has continued to decrease over the past few decades, said Day, who is a sociologist who said she studies theology in practical ways.

"We need stories behind things like that — women need a space to hear their voices," Day said. "And this is why things like this are so important — to hear stories of both triumph and failure. As a church we can learn from this." 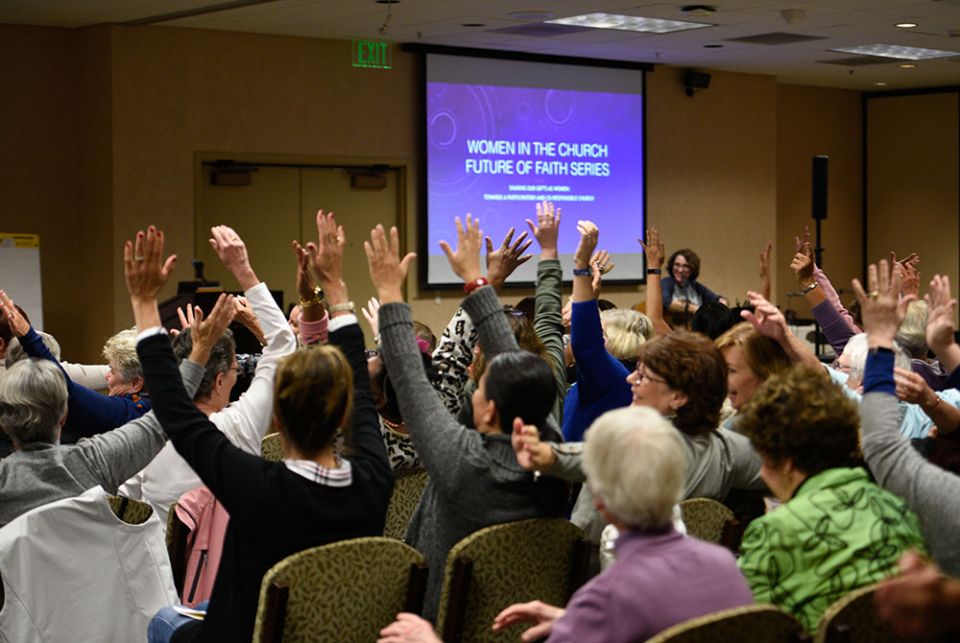 The planning team also recognized the need to elevate voices of youth. The second event, which took place in January of this year, was attended by between 30-50 youth from across the San Diego Diocese.

The event offered youth a chance to express themselves artistically, with painting and written word opportunities.

"[There were] different kinds of opportunities for kids to express what they want the future of their church to look like through art," Gramme said.

The final event of the series, which was on Zoom, was a combination of the two events, inviting both women and youth from the diocese to attend. Small working groups then emerged to continue discussions on actionable proposals.

Last month, the group held a virtual meeting attended by 45 people, focused on women. The presentation aimed to ground participants in historic Catholic feminine voices, including Sr. Dorothy Stang and Sr. Thea Bowman, whose leadership inspires women to believe in themselves.

During the meeting, participants presented three proposals for the Diocese of San Diego that aim to give more of a voice to women in the diocese. Day wrote in an email on Dec. 14, 2020, that the diocese has not received the proposals, which are currently in development, and has not committed to the three action steps, but that the diocese is "interested in learning what emerged from the series and that the door was open to possible collaboration."

One proposed idea for the Diocese of San Diego is the creation of a speakers bureau of women. In a Powerpoint presentation of the event shared with NCR, the bureau is described as a list of women available to the diocese who could be trained in homiletics.

Multiple committee members noted in interviews that they are making the distinction between giving a reflection and a homily, as women are barred from giving a homily at Mass.

Another idea proposed to the Diocese of San Diego is to create an all-women advisory council to Bishop Robert McElroy.

Gramme said the proposed women's advisory council would be "a group of women that would meet with the bishop and convey the needs of women with the diocese."

The group hoped the advisory council could be on the same "level" of influence as the all-male presbyteral (priest) advisory committee to the bishop.

According to Kevin Eckery, vice chancellor of communications and public affairs in the Diocese of San Diego, there are currently 22 "committees or commissions" that advise the bishop.

The groups range from the mandated review board for clergy sex abuse accusations, to the committee of intercultural affairs, which Eckery said emerged organically.

Eckery said there is not a process for instating new committees to advise the bishop, but that each group is considered individually, and can grow into their own depending on the needs of the diocese.

The final proposal is the creation of a women's synod in the Diocese of San Diego, as the diocese previously held synods focused on youth, and family. Several members of the planning committee group said they felt positive about McElroy being open to this idea and to their other proposals.

Jeffrey Burns is a Catholic deacon and director of the Harpst Center for Catholic Thought and Culture at the University of San Diego, which provided the institutional backdrop to the Future of Faith series.

Burns said the committee will have to be strategic and will send a report in addition to the proposals to the bishop.

McElroy has said he supports allowing women to serve as deacons in the Catholic Church, telling NCR in 2019 that "women should be invited into every ministry or activity we have that's not doctrinally precluded."

"There were a lot of women who mentioned women's ordination in our groups, that's for sure," Burns said.

Burns said that due to John Paul II's declaration that women's ordination may not be discussed, it shouldn't be included in actionable proposals, but should be in the report to the bishop.

"I think with the current pope and current bishop, there's all sorts of possibilities for women right now," Burns said. "I don't think we're going to get women's ordination any time soon, but women in positions of leadership, women's advisory bodies, those are things that can happen and hopefully will happen."

A version of this story appeared in the Jan 22-Feb 4, 2021 print issue under the headline: Event series' proposals aim to raise women's voices in San Diego Diocese .