'I am your brother,' Burlington's new bishop tells Vermont Catholics 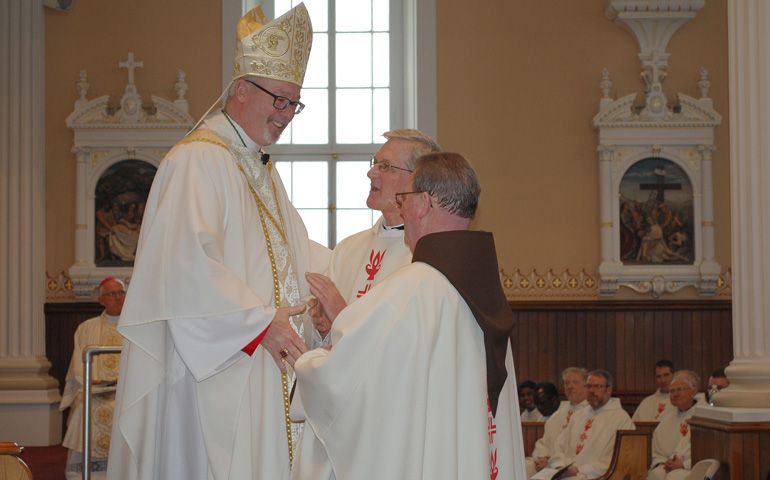 Burlington, Vt. — The former auxiliary bishop of the Indianapolis archdiocese was installed as the 10th bishop of the Burlington diocese during a joyful celebration of the Mass on Thursday.

"To my new friends in Vermont I say, 'I am your brother, Christopher,' " Bishop Christopher Coyne said to one of many rounds of applause during the nearly two-hour celebration at St. Joseph Co-Cathedral in Burlington.

The name means "bearer of Christ," and that is what he wants to be for them. he said.

He addressed the challenge faced in Vermont and elsewhere of declining membership in the church and a cultural trend away from revealed religion to a personal spirituality at best or no belief at worst.

Pointing out that Jesus did not stay in the synagogue, Coyne said his voice did not simply ring out from a place of worship like a bell stationary in a church steeple, calling people to come to him; he went out to them. He went out to spread the good news of the kingdom of God and the offer of eternal salvation.

"My brothers and sisters, I challenge myself and you to follow the Lord's lead to 'go out.' We are no longer the church of the establishment in which if we just open our doors and ring the bells people will come. That is not happening," he said.

"In fact, we are opening our doors and people are not coming. They are leaving," he continued. "We have to change the paradigm from that of the church of the establishment to that of a missionary church, one that has to go out and engage the wider community in our ongoing acts of Christian mercy and in our words and conversation."

Boston Cardinal Sean O'Malley presided over the installation and said the bishop could count on his friendship and prayers as he embarked on his new ministry in Jesus' name.

Msgr. Angelo Accattino, first counselor at the apostolic nunciature in Washington, read the apostolic mandate by which Pope Francis appointed Coyne to be bishop of Burlington, which covers the state of Vermont.

When Coyne accepted the mandate, he was handed a crosier, a sign of his office; it belonged to the first bishop of Burlington, Bishop Louis de Goesbriand.

He succeeds Bishop Salvatore Matano, who was installed in January 2014 as the ninth bishop of Rochester, N.Y.

A native of Woburn, Mass., which is in the Boston archdiocese, Coyne was a professor of sacred liturgy and homiletics at St. John Seminary in Brighton, Mass., from 1994-2003 and adjunct faculty from 2003-2006.

When he was named to lead the Burlington diocese in December, Coyne had been auxiliary bishop of Indianapolis since January 2011.

He was apostolic administrator of the Archdiocese of Indianapolis from September 2011 to December 2012, after Archbishop Daniel Buechlein retired early for health reasons and until Archbishop Joseph Tobin was named to head the archdiocese.

Coyne is chairman-elect of the communications committee of the U.S. Conference of Catholic Bishops; he will succeed Bishop John Wester of Salt Lake City in November and serve a three-year term as chairman. He also is a member of the USCCB's Committee on Evangelization and Catechesis, a subcommittee on lay ecclesial ministry and the subcommittee for the Catholic Communication Campaign.

Rita Coyne of Woburn said her son's installation as bishop of Burlington is the "culmination of all I knew he could be and do."

"He realizes his potential and wants to do so much good," she told the Vermont Catholic, Burlington's diocesan magazine.

Asked to name his three best qualities, she replied: "He is very open to new ideas. He believes in the future. And he trusts in God deeply."

Fr. Timothy Naples, a pastor, said the bishop will "definitely be a good influence for reaching out in new ways and using more technology."

He said because today's technology makes it possible to reach out to more people, he hopes Coyne can encourage all parishes and all Catholics to use it more, but added that not everyone can be reached by social media so more traditional means are still necessary.

The bishop began using social media when he was a parish priest, finding it a successful way to communicate. "If you're going to engage people and get the message out," digital media is an effective tool, he said at a press conference before the Mass of Installation.

The night before his installation, Coyne participated in a vesper service at the Cathedral of the Immaculate Conception in Burlington, attended by ecumenical and interfaith leaders.

Attending the prayer service was a pastor from the Indianapolis archdiocese, Fr.Jonathan Meyer. He said the bishop is open to invitations and visited the parishes he served several times for events including a county fair.

"He's a good man, and I am very thankful for the role he played in my priesthood and life," Meyer said. "He is very approachable and relatable and at the same time fatherly and a strong priest of God."

[Fugere Urban is staff writer for Vermont Catholic magazine, the official publication of the Burlington diocese.]

US bishops' spring assembly opens with rapid start to communications

US bishops are not rushing to Francis-led agenda