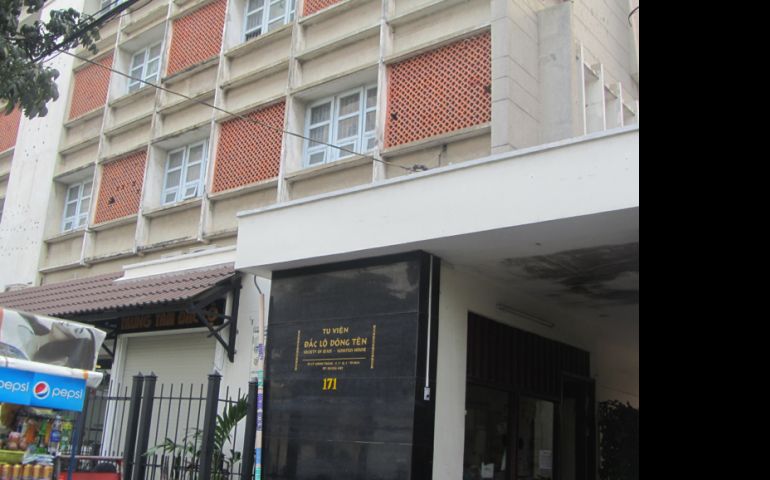 Dac Lo Monastery was the first Jesuit monastery established in Vietnam when they returned to the nation in 1957 after dissolution in 1773. The first Jesuits arrived 399 years ago, in 1615. (Teresa Hoang Yen)

Ho Chi Minh City, Vietnam — Vietnamese Jesuits are urged to continue bringing the Gospel's values to people as they celebrate the 400th anniversary of the arrival of the first Jesuits to Vietnam.

Archbishop Paul Bui Van Doc, president of the Catholic Bishops' Conference of Vietnam, asked local Jesuits to "be hymns of praise and bring people back to God through their life, witness and pastoral activities."

Doc presided at the special Mass marking the 400th anniversary of the arrival of the first three foreign Jesuit missionaries to Vietnam, held Jan. 18 at the Notre Dame Cathedral in Ho Chi Minh City.

The archbishop also urged Jesuits to have constructive dialogue with other people and to build bridges between them, especially to the disadvantaged in remote areas. The Vietnamese Jesuits have extensive ministries in the Central Highlands, an area where ethnic minority people live. They speak different languages, are often materially poor and do not have access to the usual benefits offered to Vietnamese citizens.

About 1,500 people attended the celebration concelebrated by nine bishops and 100 priests.

In his homily, Jesuit Bishop Cosme Hoang Van Dat of the northern Bac Ninh Diocese, said Italian Fr. Francois Buzomi and two Portuguese -- Fr. Diogo Carvalho and Br. Antonio Dias -- had landed at the port of Cua Han (now Da Nang City) in central Vietnam on Jan. 18, 1615. This marks "an important milestone in the history of the Catholic church in Vietnam," he added.

Other Jesuit missionaries were also sent from Macau to the nation years later. Among them was Fr. Alexandre de Rhodes, who later became an expert in Vietnamese language and customs. His catechism book published in 1651 in Rome was considered the first book in Quoc Ngu (Romanized Vietnamese script). He also set up and trained indigenous catechists, who worked with foreign missionaries in evangelization.

De Rhodes' activities "really made Catholicism incarnated in Vietnamese society," said Dat, who is the first Jesuit prelate in Vietnam.

The bishop said before the Holy See established the first two Apostolic Vicariates of Dang Ngoai (Tonkin) and Dang Trong (Cochinchine) in 1659, Jesuit missionaries had baptized over 150,000 people, though facing severe religious persecution by local authorities.

Well known among those who were killed for their Catholic faith was Blessed Andrew Phu Yen, an indigenous catechist who worked with the early Jesuits, including de Rhodes, and was killed in 1644. He is the proto-martyr of Vietnam. Pope John Paul II beatified him in 2000.

Sixteen foreign and Vietnamese Jesuits were killed for their faith in religious persecutions from the 17th to 19th centuries.

After the Society of Jesuits was dissolved in 1773, Jesuit missionaries left Vietnam until 1957, when they returned to found their first community in Saigon and run the Pius X Pontifical College in Da Lat. The college provided priestly formation to students throughout South Vietnam, Cambodia and Laos; it was closed in 1976 by the communist government.

The Province of Vietnam early this month rolled out a website for the jubilee year that concludes in January.

In a statement announcing the commemorations, Fr. Joseph Pham Thanh Liem, Jesuit Provincial of Vietnam, said they will "organize seminars on missionary work and the Quoc Ngu and hold pilgrimages to the home town of Blessed Andrew Phu Yen and to the place of his execution."

The aim of this year's celebration, says the website, is the spiritual renewal of local Jesuits and all those who have adopted the spirituality of St. Ignatius Loyola.

Liem said part of the yearlong observation will include seminars and forums aimed at "learning (about) and promoting ways to evangelize properly in the world today through looking back over the history of evangelization in Vietnam. What can we discover that will suggest better ways for us to engage with the people of Vietnam today?"

The desired effect of this renewal is the strengthening of the missionary spirit of the local church and to help local Catholics to know something of the history of the Christian mission in their country.

In 2013, the Jesuit Province of Vietnam had 197 members providing spiritual exercises for local Catholics, doing evangelization work, and working with the poor, college students and internal migrants. Many of them are working in areas that lack local priests while others are providing needed spiritual and pastoral training to seminarians in diocesan seminaries across the county.

When will we actually get a new missal?

For his bar mitzvah, American chooses his grandfather's Polish birthplace