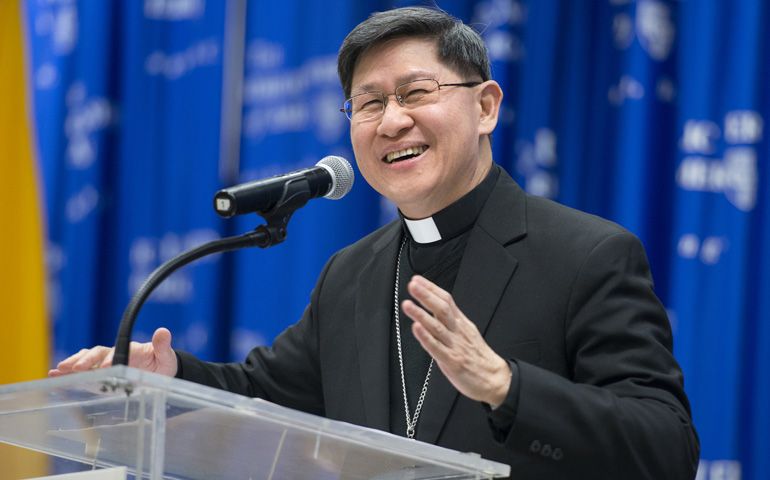 Washington — By listening to people's suffering, joys and daily endeavors, Catholics bring the vision of the Second Vatican Council to the world, Cardinal Luis Antonio Tagle of Manila, Philippines, told an audience at The Catholic University of America.

Such action demonstrates that the church values the dignity of every person, especially the poor, and that it welcomes encounters with the world without fear, as expressed in Gaudium et Spes, the Pastoral Constitution on the Church in the Modern World, Tagle said in delivering the annual Cardinal Dearden Lecture on Monday in Washington.

Tagle's talk focused on the final document of Vatican II, released nearly 50 years ago in December 1965. The document, whose Latin title means "joy and hope," was intended to lay out the church's relationship to a rapidly changing society.

Mixing the message of Gaudium et Spes with personal stories of his encounters with people living their faith and behind-the-scenes occurrences from Pope Francis' visit to the Philippines in January, Tagle described a church that could carry out its mission of bringing good news to a troubled world.

When Gaudium et Spes was promulgated, Tagle said, many Catholics wondered why the church wanted to engage the world and whether the church had any business being concerned with political and economic issues and peacemaking.

The council's intention was to come in contact with people of all walks of life as sign of respect for their dignity, he said.

"The council was very clear that it presents this teaching for no other reason than to evangelize. There is mission involved here," the cardinal continued. "It is to share the good news. It is not so much to present a parallel government, a parallel economic system. It presents valuable insight coming from revelation and presents modest contribution to humanity as it searches for a better life, a better world."

In demonstrating that love, he explained, the church is called to engage with people where they are life: in families, including those where spouses practice different religious traditions, and in neighborhoods, the workplace, politics, and Christian and non-Christian religious communities.

"We can start building a presence and become agents of reconciliation," Tagle said.

He said in the years after Gaudium et Spes was promulgated, Catholic bishops in Asia began to meet regularly, leading to the formation of the Federation of Asian Catholic Bishops in the early 1970s. The bishops recognized their numbers were small -- around 3 percent -- and that necessitated respecting the various cultures that make up the world's largest continent.

The federation recognized that even if the church is a "tiny minority," it could not abandon its mission of evangelization and it did so by listening, especially to the poor and to young people, and by respecting the long-held values of the ancient Asian cultures, Tagle said.

"It's evangelization, that big word, happening through dialogue, but dialogue happens through human interaction, making the other person feel that he or she matters, that he or she in his or her culture matters. This is the main method of penetrating cultures, entering the heart, the mind of the human person," he said.

Poor people, including those are forced to migrate for economic reasons, refugees fleeing war, people who are trafficked for sex or labor, and street children are in particular need of people to listen to their stories, he said.

"It's part of the mission of the church in Asia to show the richness of the Gospel and its universal values of truth, values open to all human beings. That this should happen in human interactions for in Asian, part of the culture is the person," the cardinal said.

Tagle cited the actions of Pope Francis during his visit to the Philippines that demonstrated how Gaudium et Spes can be lived out through encounters with others when he blessed disabled people, visited street children living in an orphanage and listened to the stories of the survivors of Typhoon Haiyan.

"He was not just a teacher. He was a listener," Tagle said of the pope.

"We are called to be in solidarity with the suffering and the poor. An evangelizing moment comes when you encounter people, real people," he added.

Tagle's visit was a homecoming of sorts. He studied at The Catholic University of America in the late 1980s and early 1990s and holds a licentiate and doctorate in sacred theology from the school. He also received an honorary doctorate in 2014.

The lecture was sponsored by the school's School of Theology and Religious Studies. It is held annually in honor of Cardinal John F. Dearden, archbishop of Detroit, for his role in Vatican II.