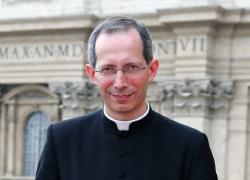 ROME -- For the better part of five years, plenty of experts on Catholic liturgy have been waiting for the “real” agenda of Pope Benedict XVI, known as a traditionalist on matters of worship, to emerge from beneath a façade of patience seemingly built on dropping hints rather than imposing sweeping new rules.

Now, however, the pope’s own liturgist insists that the patient façade is actually the agenda.

One month ago, that papal liturgist, Msgr. Guido Marini, sparked wide debate with his public call for a “reform of the reform,” suggesting to some a desire to roll back the clock on liturgical reforms associated with the Second Vatican Council (1962-65). However, Marini insists that no such rollback is underway, and no dramatic new rules are in the works.

When Benedict employs more traditional touches in his own liturgies, such as giving Communion on the tongue, those amount to “proposals,” Marini said, intended to gradually influence the church’s liturgical culture, and are not harbingers of forthcoming papal edicts.

“I don’t believe that the liturgy of the church needs any radical changes or distortions,” Marini said, saying he “fully” agrees with a comment from then-Cardinal Joseph Ratzinger, now Pope Benedict XVI, that Catholic liturgy needs a “period of stability” after the wave of dramatic, and at times contentious, reforms that flowed from Vatican II.

Marini, the master of papal liturgical celebrations, spoke in an exclusive interview with NCR Feb. 9 in his Vatican office. (Read more of the interview here: Q & A with Msgr. Guido Marini, papal liturgist.)

When Marini addressed a Jan. 6 conference in Rome sponsored by the Australian Confraternity of Catholic Clergy and the U.S.-based Confraternity of Catholic Clergy, he seemed to call into question at least some of the reforms from Vatican II, such as active participation by laity in the liturgy and greater “inculturation,” meaning adjusting the church’s rites to reflect local cultures.

In his conversation with NCR, however, Marini said that undoing those reforms is not what he had in mind. Marini conceded that the liturgical winds are blowing in a traditional direction, but said any change should happen slowly and without new upheaval.

“I believe it’s a matter of consolidating what we already have, in a more authentic way, according to the true mind of the church,” Marini said. He said that’s what Benedict has in mind when he talks about “development in continuity.”

Marini, 44, has served as Benedict’s master of liturgical celebrations since October 2007. In that role, he is the chief organizer of the pope’s own celebrations; liturgical policy for the wider church is set by the Congregation for Divine Worship and the Discipline of the Sacraments, presently headed by Spanish Cardinal Antonio Cañizares.

Trying to turn back the clock on Vatican II “wouldn’t make any sense, because it’s not how the life of the church works,” Marini said. New developments, he said, should happen “organically,” and “the best way, the most correct way ... is certainly not to reject the reforms that were determined by the Second Vatican Council.”

In his Jan. 6 speech, Marini also pointed to certain specific practices that have been adopted in Benedict’s own liturgical celebrations. They included placing a cross on the altar during Mass, so that both priest and people are oriented toward God rather than one another, and the practice of administering Communion to people on the tongue while kneeling rather than taking it in the hand while standing.

Marini told NCR, however, that Benedict’s style is to “propose” these practices so that they may be slowly “welcomed” into the life of the church, rather than imposing them by authority.

“It’s the style of the current pope to move forward not by imposing things, but proposing them. The idea is that, slowly, all this may be welcomed, considering the true significance that certain decisions and certain orientations may have,” Marini said.

Marini did not rule out, however, that such practices might be made binding at some future point.

“Whether sometime down the line, in the future, what the pope is presenting should become more of a disciplinary norm [for the whole church], we don’t know and can’t say,” he said.

Marini said much the same spirit of preferring gradual evolution to dramatic exercises of authority applies to Benedict’s decision in 2007 to authorize wider celebration of the older Latin Mass, the so-called Tridentine rite. No one is compelled, he said, to worship according to that rite, but rather both now have “full legitimacy.”

“What’s important now is that both forms of the Roman rite look upon one another with great serenity,” he said, “realizing that both belong to the life of the church and that neither is the only true, authentic expression.”

In general, Marini suggested, anyone expecting a dramatic liturgical overhaul from Benedict is likely to be disappointed.

“The pope has a vision based on great faith in the life of the church,” he said. “The church has its own sense of time, its own rhythms. … Sometimes things can’t just be imposed. They have to slowly enter into the way of thinking of the church, its way of feeling, its climate.

“Within that,” Marini said, “maybe one can eventually arrive at providing a more precise disciplinary norm, but maybe first you have to shape a consensus.”

All this week, NCRonline.org focuses on liturgy. Every day a new article and lots of discussion.