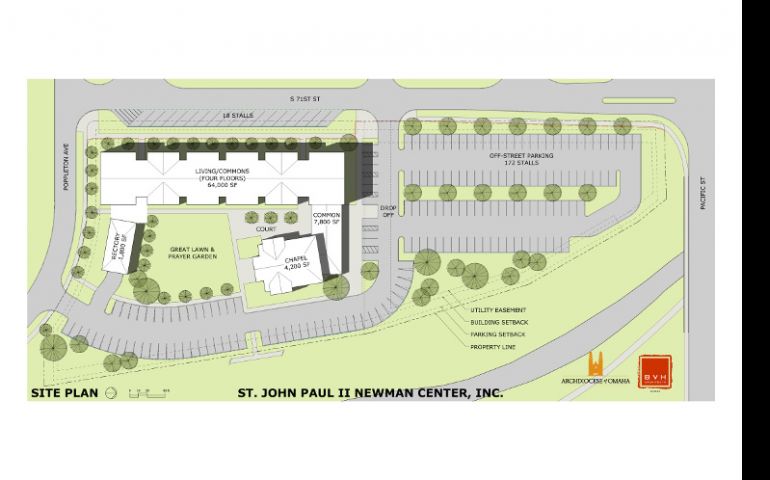 This is an architectural rendering of the Archdiocese of Omaha, Neb.'s proposed St. John Paul II Newman Center near the University of Nebraska at Omaha's Aksarben campus. (CNS illustration/courtesy BVH Architects)

Omaha, Neb. — With backing from the University of Nebraska at Omaha and surveys of parents and youths indicating solid support, the archdiocese has purchased land near the college campus in hopes of building a Newman Center to open in the fall of 2016 with a student residence, a prayer garden, rectory and chapel.

The Omaha Planning Board has unanimously approved land use for the Newman Center and the City Council is scheduled to vote on the plan in April.

The $1.8 million purchase in January of 3.5 acres near the university's Aksarben campus comes after years of serving Catholic students without a permanent base for the Omaha Archdiocese's campus ministry programs at the university, said Fr. Joseph Taphorn, moderator of the curia, judicial vicar and vicar for clergy.

Over the past seven years, those efforts have received a boost from college missionaries working on campus with Colorado-based Fellowship of Catholic University Students, Taphorn said.

Working together, the ministries have attracted a growing number of students to Bible studies on campus, Masses at St. Margaret Mary Church, mission trips and retreats, he said. The archdiocese also has strengthened its campus ministry program at Wayne State College in Wayne with the addition of FOCUS missionaries. FOCUS has been at the College of St. Mary in Omaha for several years.

"There is a whole new dynamism and level of involvement," Taphorn told the Catholic Voice, Omaha's archdiocesan newspaper. "There's been steady growth, and now there is a complementary need for physical space."

The effort is a strong expression of the archdiocese investing in the welfare of higher education students -- including encouraging vocations to the priesthood, religious life and Christian marriage, which have been enhanced by Newman Centers at the University of Nebraska-Lincoln and other colleges and universities across the country, Hoesing said.

"Because Newman Centers propose a life of virtue and holiness at secular universities, young people consistently receive formation for Christian marriage and new freedom to consider a vocation to the priesthood and consecrated life," he said.

The Newman Center proposal is "a bricks and mortar expression of the archdiocese's desire to see our young people flourish," he said.

Discussion about a Newman Center -- to be called the St. John Paul II Newman Center after the late pope, who will be canonized in April -- has taken place in the archdiocese periodically over the last six or seven years, and about two years ago an eight-member feasibility committee -- including experts in business, finance and real estate -- was formed, Taphorn said.

In a Feb. 4 letter to Omaha Archbishop George J. Lucas, Chancellor John Christensen of the University of Nebraska at Omaha said he supports construction of a Catholic Newman Center with a housing component, in part because the university needs more housing as it increases enrollment from 15,000 students now to a goal of 20,000 by 2020.

"There are many Catholics in the Omaha area and we see this as an incentive to those students and their parents to experience all that UNO has to offer," Christensen said.

The university also is concerned about students' spiritual well-being, and the project will help them explore "this aspect of their lives -- finding a connection to their God, nature and others," he said.

Tentative site plans include a four-story building for 164 residents in 41 apartments, a commons area attached to a chapel for use by the residents as well as commuter students, and a rectory, with the entire unit grouped around a prayer garden and courtyard.

The land was purchased with money raised from the sale of undeveloped real estate, Taphorn said.

Using this year to help plan the next step, the archdiocese is looking at several ways to pay for the construction, which under current plans could cost about $13 million. One avenue might be a model that has worked at other campuses, in which the majority of funds come from student rent payments supplemented by private fundraising, he said.

"We're responding to a need," Taphorn said of the growing campus ministry. "And we want to invest in a facility and programming that will help strengthen students' faith lives as well as create a fun and supportive atmosphere during these critical young adult years."

[Joe Ruff is news editor of the Catholic Voice, newspaper of the Omaha Archdiocese.]