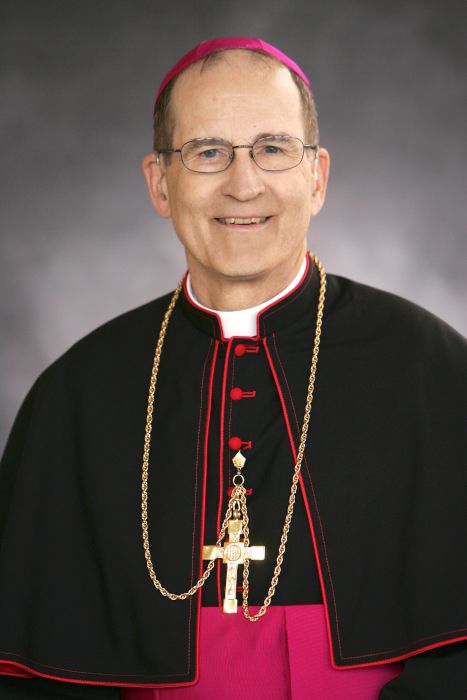 Washington — Pope Francis has accepted the resignation of Bishop John M. LeVoir of New Ulm, Minnesota. He has headed the diocese since 2008.

The resignation was announced in Washington Aug. 6 by Msgr. Walter Erbi, charge d'affaires at the apostolic nunciature in Washington.

Born in 1946 in Minneapolis, LeVoir turned 74 Feb. 7 and is just a few months shy of 75, the age at which bishops are required by canon law to turn in their resignation to the pope.

Ordained to the priesthood for the Archdiocese of St. Paul and Minneapolis May 30, 1981, then-Fr. LeVoir had parish assignments in Stillwater, Minnesota, and in South St. Paul. He was named the fourth bishop of New Ulm July 14, 2008. After his appointment, he made four trips to his new diocese to get to know the priests and the people he would be serving. He was installed Sept. 15, 2008.

Before entering the seminary, LeVoir, who is a certified public accountant, worked for several years as a public accountant and as an instructor of accounting at the University of Minnesota in Minneapolis. As a bishop, he has served on the U.S. Conference of Catholic Bishops' Audit Subcommittee as chairman, 2014-2019, and currently as a member.

In early March 2017, the New Ulm Diocese filed for reorganization under Chapter 11 of the U.S. Bankruptcy Code to settle abuse cases filed against the diocese.

Three years later, on March 10 of this year, a U.S. bankruptcy judge gave final approval to a $34 million settlement agreement between 93 victim-survivors of clergy sexual abuse and the Diocese of New Ulm, as well as parishes within the diocese.

Claimants voted unanimously to approve the settlement. The judge's final approval cleared the way for the 93 clergy abuse-survivors to begin receiving compensation under the settlement. The diocese also has committed to 17 child protection protocols.

In a statement, LeVoir apologized for the harm abuse survivors endured and said he knows the settlement can't make amends for all that was taken from them.

At the time the diocese filed for bankruptcy, LeVoir said he asked diocesan attorneys to take the action in response to the enactment of the 2013 Minnesota Child Victims Act, which temporarily lifted the civil statute of limitations on child sexual abuse claims for three years. That three-year window ended May 25, 2016.

He has been a member of the episcopal board of advisers for the canonization cause of Archbishop Fulton J. Sheen since 2009. He also has served on the U.S. Conference of Catholic Bishops's Committee on the Protection of Children and Young People, 2010-2015, and on its Subcommittee for the Promotion and Defense of Marriage, 2011-2016.

In an interview with The Catholic Spirit, newspaper of the Archdiocese of St. Paul and Minneapolis, after his appointment to New Ulm in 2008, he said he felt some apprehension about his new job.

"I tell people I'm nervous," he said. "The responsibility — that's the main thing. And, carrying out God's will as a bishop."

"As time goes on, God lets you know what you need to know. He doesn't show you miles down the road, but he shows you the next step," the newly named bishop added.

During his installation Mass in 2008, LeVoir continually referred to himself as a humble servant. As he posed with numerous families and groups eager for a pictorial souvenir of the event, his pastoral gifts and ability to connect with people — not to mention his well-documented patience — were clearly evident to the faithful.