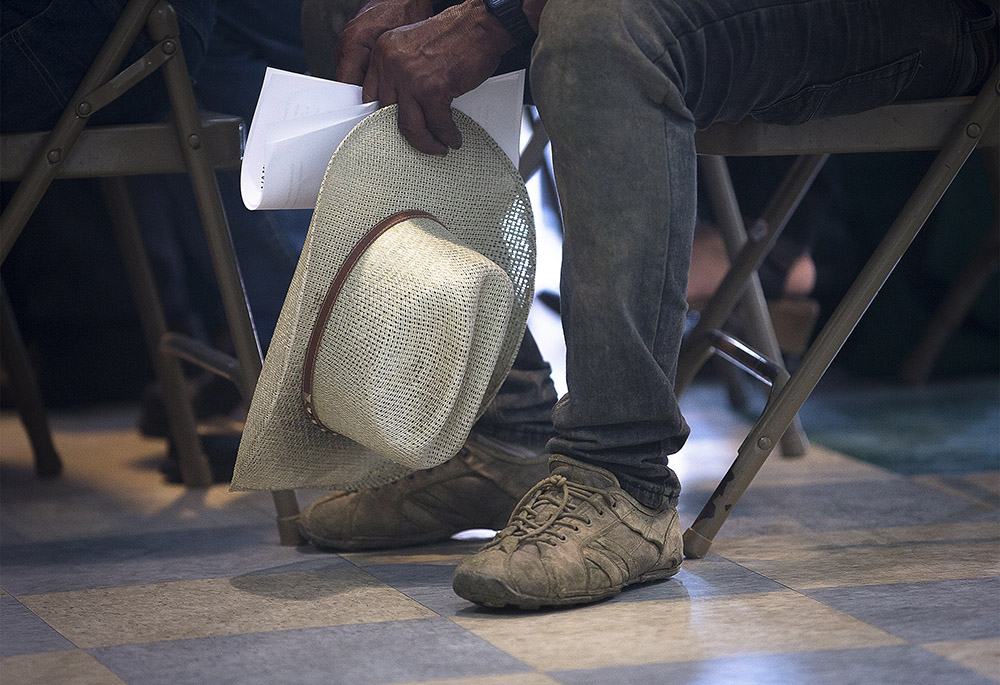 A farmworker attends Mass at the Centro Sin Fronteras in El Paso, Texas, Sept. 25, 2019, during a pastoral encounter by U.S. bishops with migrants at the border. U.S. dioceses are seeking the voices of farmworkers and other marginalized groups for the synod on synodality. (CNS/Tyler Orsburn)

The preparatory documents for the 2021-23 Synod of Bishops on synodality make it clear: Bishops the world over are called to make "every effort" to consult and listen to those who feel "excluded or marginalized" from society and the church.

"If we believe in the imago Dei, that the image of God is in everyone, then if we do not hear from those voices, we are not hearing from the entire body of Christ. And that's our loss," said Mary O'Meara, the executive director of the Office of Deaf and Disabilities Ministry for the Archdiocese of Washington.

Diocesan officials, chaplains, social workers, lay ministers, parish leaders and others are listening to people with intellectual and physical disabilities. They are reaching out to those in prisons, homeless shelters, soup kitchens and mobile home communities. Pastors have organized parish listening sessions for LGBTQ parishioners and seasonal farmworkers near the U.S. southern border.

"I think we need to hear from all kinds of people," said Dominican Sr. Donna Ciangio, the chancellor for the Archdiocese of Newark, New Jersey, who is leading the synodal process there.

Pope Francis and other church leaders have framed synodality as a decisive step in the church's renewal that the Second Vatican Council proposed more than a half century ago. As the pope has explained it, a synodal church journeys together with all the baptized, including those whose voices are usually not heard.

"Pope Francis' main question is critical," Ciangio told NCR. "What does the Holy Spirit expect of the church in the 21st century? We can sit around and look inward, but if we're not hearing from everyone, we won't know how we can get the Gospel out today."

NCR interviewed diocesan officials, lay ministers and pastors in several dioceses to see how local churches are seeking out the voices of Catholics on the margins. The following offers brief snapshots of five of those efforts. 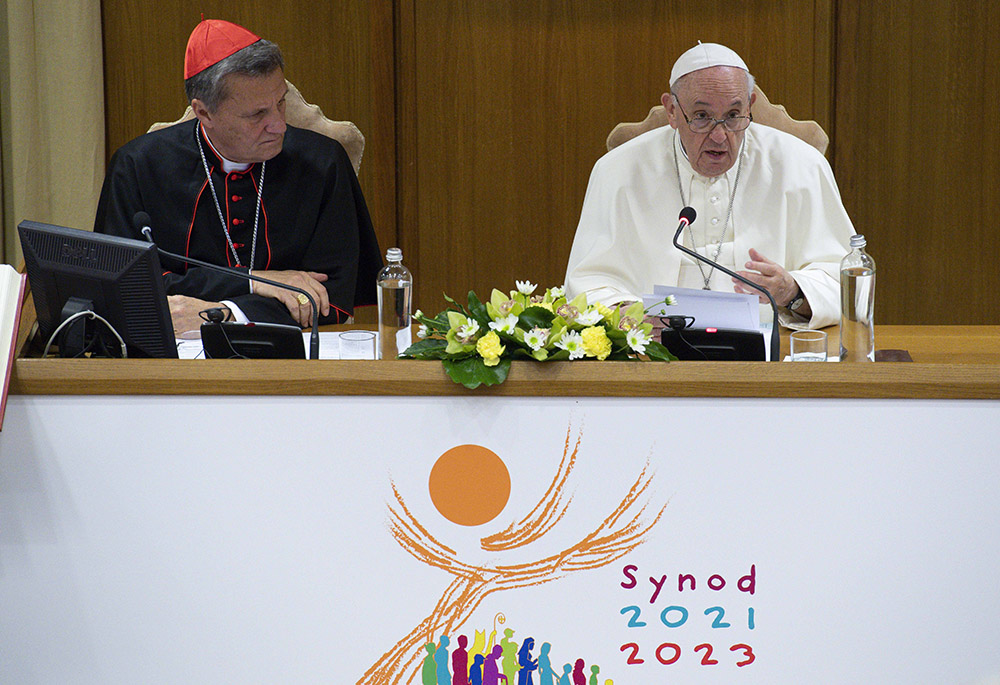 Pope Francis speaks as Maltese Cardinal Mario Grech, secretary-general of the Synod of Bishops, looks on during a meeting with representatives of bishops' conferences from around the world at the Vatican in this Oct. 9, 2021, file photo. (CNS/Paul Haring)

"You can't be any more marginalized than an inmate in jail," said Msgr. John Pollard, the synod coordinator for the Archdiocese of Chicago.

Pollard told NCR that the archdiocese is relying on its Kolbe House Jail Ministry to hear from the estimated 700 Catholic pretrial detainees at the Cook County Jail, one of the largest single-site pre-detention county facilities in the United States.

"It's important to hear from them because they are human," said Emily Cortina, the coordinator of outreach and formation at Kolbe House. Cortina told NCR that society at large often makes incarcerated people out to be "monsters" who are less deserving of mercy.

"And that's not the case," she said. "We're following the model Jesus gave us to listen to the voices of those who have stumbled and fallen and are still reaching out somehow for grace and mercy, because that's really where we find God."

Cortina said Kolbe House is mailing a survey to Catholic men and women who are incarcerated at the Cook County Jail and other jails and prisons in Illinois.

"We're also asking them if they would feel comfortable with a church community outside of jail," Cortina said, adding that people with criminal records often experience stigma in society. "We want to understand what a welcoming inclusive community looks like for them, and what would help them to feel welcome in a church."

Given the various restrictions in jail settings, Cortina said it is often difficult to organize group listening sessions for incarcerated persons.

"We will have one in-person listening session with our reentry community," Cortina said in referencing people who were previously incarcerated. Kolbe House also offers ministries that support relatives whose loved ones are incarcerated, as well as phone and letter-writing programs to let those in jail know that they are not forgotten. 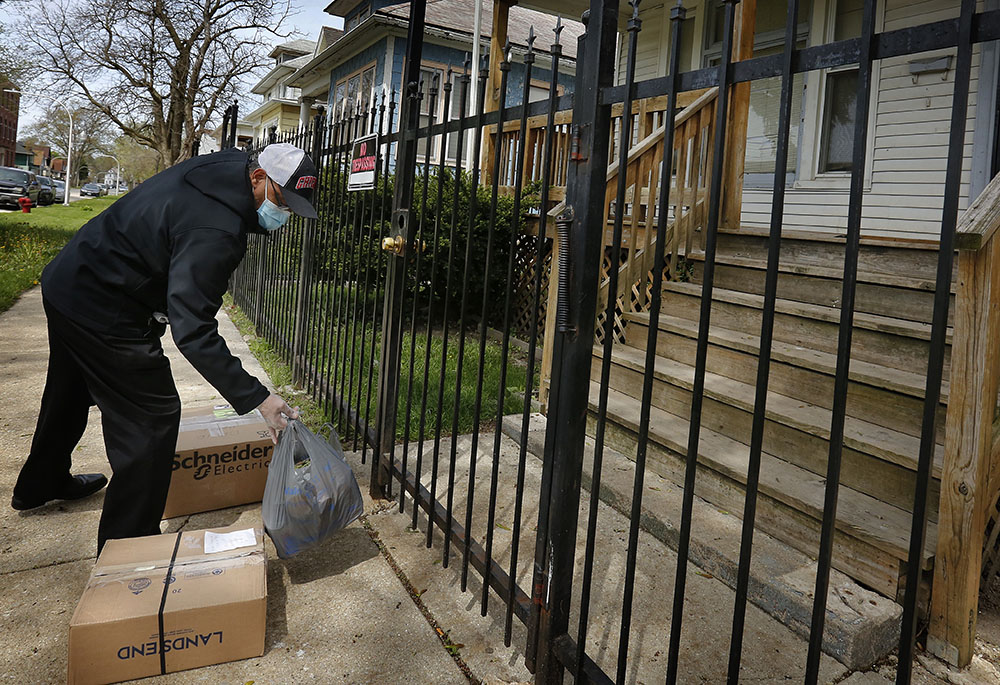 In the colonias, or unincorporated communities, surrounding El Paso, Texas, volunteers are knocking on doors, asking residents how the COVID-19 pandemic impacted them, and how the church can help them regroup and get back on their feet.

"It takes a lot of initiative to meet with people who aren't already in your [social and church] circles," said Surya Kalra, a lead organizer with the El Paso Interreligious Sponsoring Organization, which is working with the Diocese of El Paso to listen to local voices for the synod.

"If you're doing a consultation with the people who are already in the pews, who are already coming to church, that's great, and helpful," Kalra told NCR. "The difficult part is figuring out how to reach out to people we don't see [in church], who used to be here, or would be here if we were different. That requires much more persistence and creativity."

The main strategy that EPISO, an affiliate of the Industrial Areas Foundation, a national network of faith- and community-based organizations, is using to help individual parishes reach out to those voices on the margins consists of house meetings, which are small informal group settings in private homes.

"The house meetings have become a way for people to engage others," Kalra said. "They're oriented to be very relational. People are getting to know each other in a different way. You can prompt people and ask them who do they know who they'd like to engage in a conversation like this, and if they would be willing to bring people together. The house meeting can be a tool to search for people, so it doesn't have to be a one-time effort."

Fr. Iván Montelongo, the synod coordinator for the Diocese of El Paso, told NCR that the diocese is also leaning on its ministries that serve marginalized voices, such as the homeless, the imprisoned, clergy sex abuse survivors, and those who have drifted away from the church.

"I am enriched if I hear what others have to say about their reality and our common reality," Montelongo said. "The church is enriched as well if we listen to all of the baptized."

At Holy Trinity Church in Georgetown, a couple dozen LGBTQ parishioners and their families earlier this year attended a special listening session. Jesuit Fr. Kevin Gillespie, the pastor, said there were tears and some anger directed at the Catholic Church.

Jeannine Marino, the synod coordinator for the Archdiocese of Washington, told NCR that if people feel distanced or marginalized from the church, they can sometimes be hesitant to participate in synodal listening sessions.

"I think that is an obstacle, and maybe that's where those of us who are still actively participating in the church need to remember the pain that happens when we have missing brothers and sisters," said Marino, who referenced Cardinal Wilton Gregory's comment to LGBTQ Catholics during a 2019 Theology on Tap gathering that they "belong to the heart" of the church. 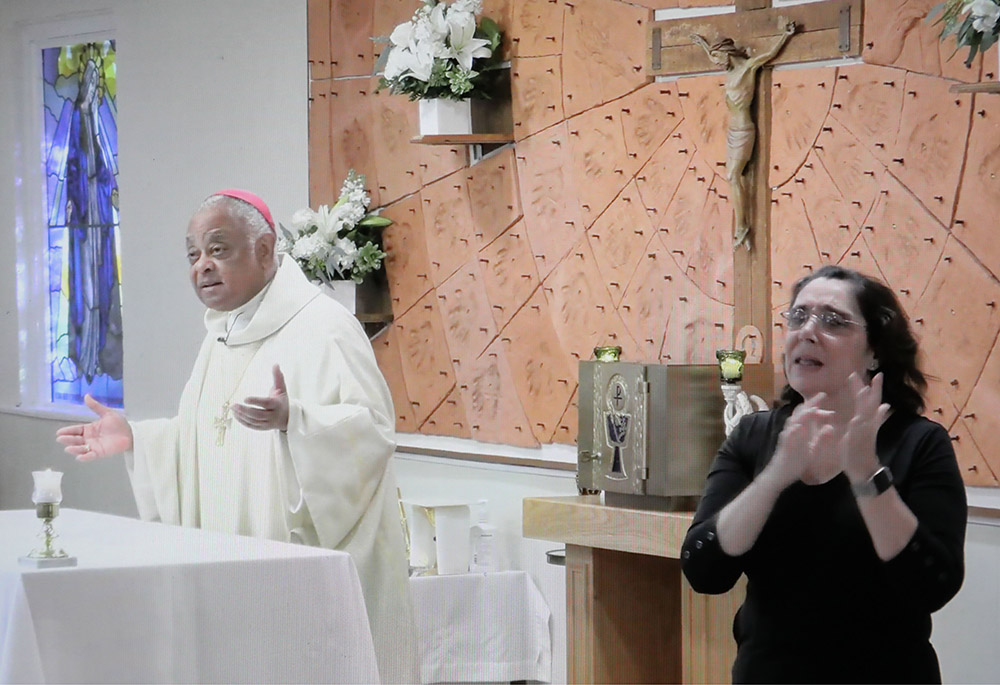 That also includes Catholics who are deaf and have intellectual disabilities. For the deaf community, the archdiocese has organized listening sessions facilitated by deaf lay leaders. The sessions were all conducted in American Sign Language.

O'Meara, the executive director of the archdiocesan Office of Deaf and Disabilities Ministry, told NCR that persons with intellectual disabilities, working with diocesan staff, have led listening sessions for their community.

"It was all self-led and paced," O'Meara said. "The self-advocacy was critical, to have the leaders of those communities actually do the facilitation of the listening sessions."

The sentiments that have arisen in the listening sessions, O'Meara said, reflect the participants' desire to be fully integrated into church life.

"We know the people who are served in those programs, and we feel they'd be comfortable with us," said Erin Maguire, a regional network builder with Catholic Community Services of Western Washington. Maguire is planning listening sessions throughout the spring.

"I feel proud to participate in something that the global church is doing," Maguire told NCR.

Joe Cotton, the director of pastoral care and outreach for the Archdiocese of Seattle, told NCR that hearing from marginalized voices has been a key topic of conversation among the chaplains and lay ministers who regularly visit people in prisons and hospitals, who minister to the crews of visiting ships at the port, and work with migrants, refugees and those with intellectual and physical disabilities.

"Everyone who we're in daily relationships with, they're precisely the people who the Holy Father wants to hear from the most. He wants to make sure they're included," Cotton said.

Even with COVID-19 restrictions lessening somewhat, Cotton said ministers and chaplains still face limited access to organizing group sessions in prisons and hospitals. The archdiocese has distributed surveys that allow people to write out and draw their reflections.

"In our jails and prisons particularly, the creativity of the people on the inside is jaw-droppingly beautiful and amazing," said Cotton, who added that the archdiocese might even host an exhibit of prisoners' art at St. James Cathedral in Seattle.

Said Cotton: "It could be titled, 'Synod responses from the margins.' " 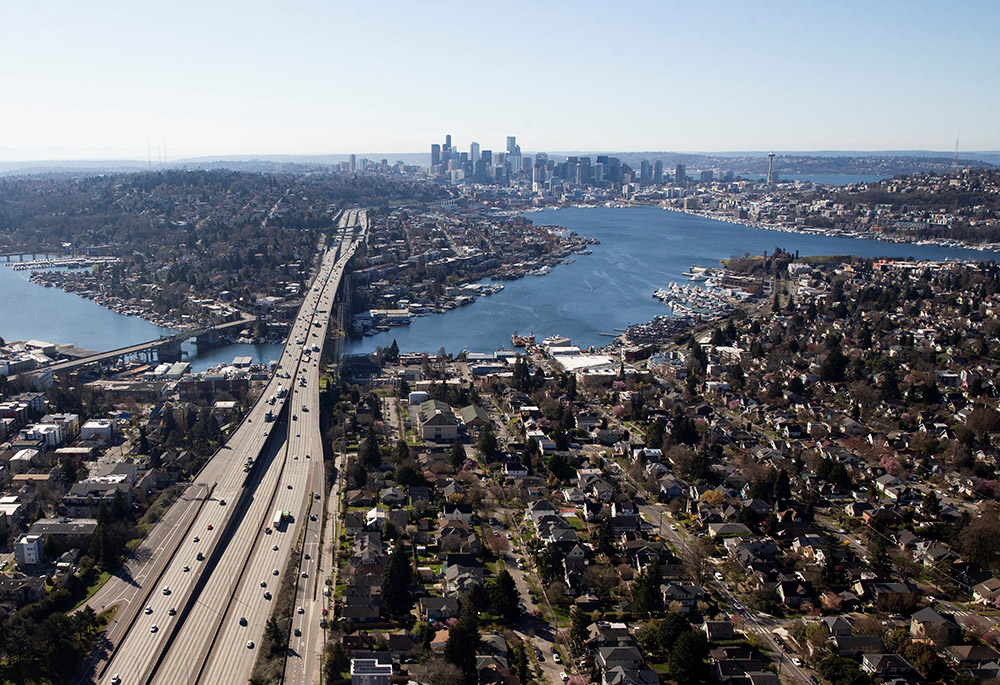 An aerial view of Seattle is seen March 16, 2020. (CNS/Reuters/Lindsey Wasson)

Marioly Galván, chancellor for the Diocese of San Diego, told NCR that Catholic Charities of San Diego is helping the diocese to connect with migrant seasonal farmworkers, especially those who work the land in Southern California's Imperial Valley.

"We want to remain mindful of those communities. We're all brothers and sisters, so to hear from their reality and their lived experience, I think will be very enlightening for everyone else to hear," said Galván, who is serving as the diocesan synod coordinator.

Galván said the diocese is also partnering with Father Joe's Villages in San Diego to hear from the homeless community and with the diocesan Office of Life, Peace and Justice to get feedback from incarcerated people.

"Pope Francis has called us to really reflect deeply in this discernment on what it means for all of us to be together," Galván said, adding that the pope's call for the church to hear from those on the peripheries "opens up our perspective" on what it means to be united in one body.

"And that entails listening to the good and the not so good about how the church has responded to things," Galván said. "But also at the same time, it's not just about listening to the voices that come to Mass every week. If there's a moment that would resonate and be able to allow the church to have an introspective look at itself, it's really now."

Galván said parishes are organizing small-group listening sessions, and added that the diocese will also be following up with surveys in the summer. She said the Diocese of San Diego intends to draw from the synodal experience in the years ahead to discern where the Holy Spirit is guiding the local church.

"This moment is an opportunity for renewal and reawakening," she said. "It is a moment that will lead us to become a more conscious church, to perfect and improve our ways in which we minister to others, and the ways that we listen to one another and journey with others."

This story appears in the Synod on Synodality feature series. View the full series.
A version of this story appeared in the April 15-28, 2022 print issue under the headline: 5 dioceses hearing marginalized voices.