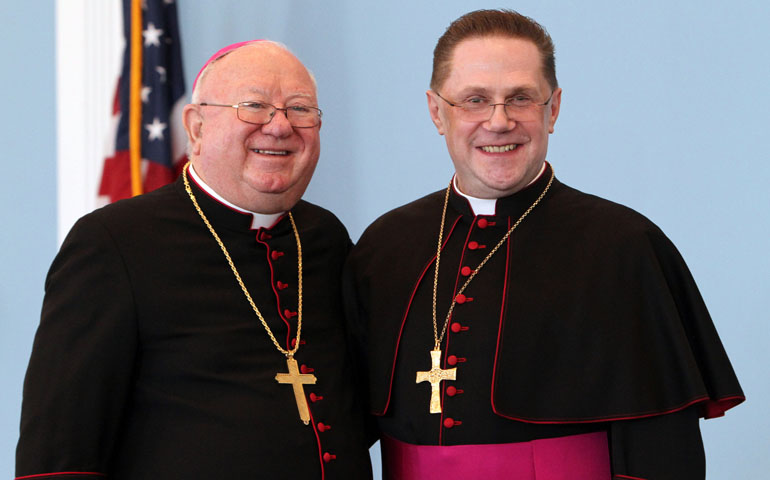 Pope Francis has accepted the resignation of Bishop Howard Hubbard of Albany, N.Y., and named Msgr. Edward Scharfenberger, a priest of the diocese of Brooklyn, N.Y., to succeed him.

The pope also appointed Msgr. Andrzej Zglejszewski as an auxiliary bishop of the diocese of Rockville Centre, N.Y., where he is currently co-chancellor and director of the Office of Worship.

The appointments and Hubbard's resignation were announced Tuesday in Washington by Archbishop Carlo Maria Vigano, apostolic nuncio to the United States.

Hubbard is 75, the age at which canon law requires bishops to turn in their resignation to the pope. He was named to head the Albany diocese in 1977, when he was 38. At that time, he was the youngest Catholic bishop in the nation.

Hubbard called it a privilege to have served so many years as head of the Albany diocese, with its cities, towns, villages, suburban and rural communities spread over 10,000 square miles, "stretching from the Pennsylvania border to the Vermont border; from the Massachusetts state line to the Utica City line; from the northern Catskills to the southern Adirondacks."

"It is an area blessed with not only magnificent physical beauty but most important with the rich and vibrant spiritual splendor of its 350,000 priests, deacons, religious and lay faithful," the bishop said in a statement.

He said all in the diocese greeted Scharfenberger, 65, "with warmth, hospitality and a sincere desire to be attentive and responsive to his leadership as our shepherd."

In his statement, the bishop-designate said he was "touched by the warm welcome of Hubbard."

"My heart is full of gratitude to God for my loving family, especially my 93-year-old parents, who were generous enough to welcome me, my two brothers and two sisters into this world," Scharfenberger said. "They taught us how to pray, to trust God and to know Jesus as our friend. Their continuous example shows us that the essence of love is sacrifice."

He also holds a licentiate in canon law from The Catholic University of America in Washington and a law degree from Fordham University in New York. He was named a monsignor in 1995.

Brooklyn Bishop Nicholas DiMarzio said Scharfenberger has been a close collaborator and friend and is "a good priest ... primarily concerned about people and is untiring in finding new ways to proclaim the message of redemption which is at the heart of the Gospel."

In the diocese of Rockville Centre, Bishop William Murphy said he was grateful to Pope Francis "for giving our diocese this good and holy priest of many talents to assist me in the pastoral care of the 1.5 million Catholics of our diocese."

"I know the priests, deacons, liturgical ministers and all the people of God will welcome this appointment from our Holy Father as I have, with gratitude to God and with great joy that ... we are blessed with a bishop who will serve this church as a bishop just as he has served it so well as a priest," Murphy added.

Zglejszewski, 52, who was born in Poland and ordained a priest for Rockville Centre in 1990, said he was surprised and humbled by Pope Francis' appointment, but added, "I turn all my emotions and wonders into a song of gratitude."

"This appointment not only shows his great concern for the church on Long Island, but also it is a concrete way of reaching out to all the faithful in the Diocese of Rockville Centre," he said in a statement. "The Holy Father recognizes the depth and enthusiasm of spiritual life coming together with an amazing exchange of the diversities of our cultures.

"Even though we all have different accents and backgrounds, what really unites us is our faith and love for God and his church."

Born Dec. 18, 1961, in Bialystok, Poland, he holds a master of arts degree from Immaculate Conception Seminary in Douglaston, N.Y., and pursued advanced studies in theology at Catholic University and Fordham.

After his priestly ordination he had several assignments as an associate pastor. He has been director of the diocesan worship office since 2007. He also has been adjunct professor at Immaculate Conception Seminary. He was named a monsignor in 2010.