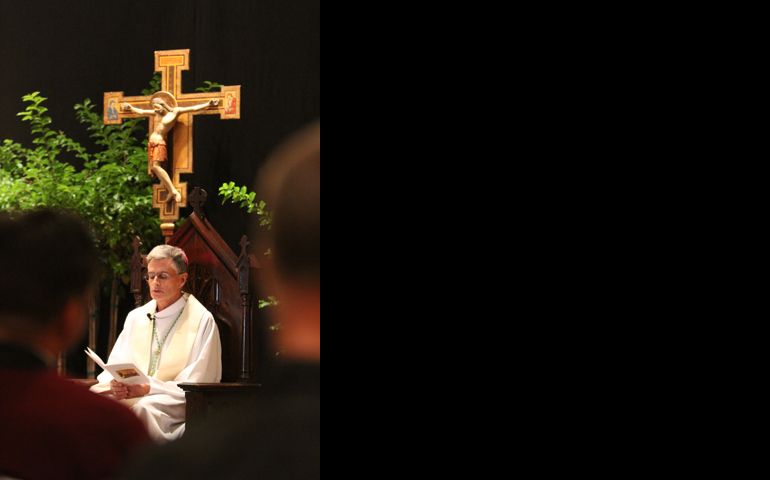 Daly, 54, has been an auxiliary of the San Jose diocese since 2011. Stowe is a vicar provincial for his community and rector of the Basilica and National Shrine of Our Lady of Consolation in Carey, Ohio.

The appointments were announced Thursday in Washington by Archbishop Carlo Maria Vigano, apostolic nuncio to the United States.

Daly will be installed in Spokane on May 20. The date and time of Stowe's episcopal ordination and installation in Lexington has not been announced.

San Jose Bishop Patrick McGrath in congratulating Daly on his appointment called him a true collaborator and co-worker as "shepherd of the flock of the Lord."

"I will miss Bishop Daly greatly, but I know that he will be a loving shepherd of the church now entrusted to his care," he said.

Daly was born April 30, 1960, in San Francisco. He earned a bachelor's degree from the University of San Francisco in 1982; a master's degree in divinity from St. Patrick's Seminary in Menlo Park, Calif., in 1987; and a second master's degree, this time in education, from Boston College in 1996.

He was ordained a priest of the San Francisco archdiocese in 1987. After ordination, he served in various capacities, including parochial vicar, teacher, campus minister and chaplain over the first 16 years of his priestly ministry.

Daly became vocations director for the archdiocese in 2002 and president of Marin Catholic High School in 2003, serving in both capacities until Pope Benedict XVI named him auxiliary bishop of the San Jose diocese in 2011, becoming the diocese's first auxiliary bishop. With his appointment to Spokane, he succeeds Archbishop Blase Cupich, who was appointed archbishop of Chicago in September.

He made his solemn profession to the Conventual Franciscans, in the Ohio-based Our Lady of Consolation Province, in 1992, and was ordained a priest in 1995.

In September 2001, he was one of 2,000 religious and lay leaders of various faiths across the United States who signed a statement urging Americans to deny any claim to victory by the terrorists behind the 9/11 attacks that took place less than two weeks earlier.

"We can deny them their victory by refusing to submit to a world created in their image. Terrorism inflicts not only death and destruction but also emotional oppression to further its aims," the statement said. "We must not allow this terror to drive us away from being the people God has called us to be. We assert the vision of community, tolerance, compassion, justice, and the sacredness of human life, which lies at the heart of all our religious traditions."

In Lexington, he succeeds Bishop Ronald Gainer, who was appointed bishop of Harrisburg, Pa., in January 2014.

News of Stowe's appointment "brought me great joy," said Gainer in a statement Thursday. "I welcome him as a brother bishop and wish him every blessing as he prepares to shepherd the wonderful Diocese of Lexington." He added, "The appointment of a Conventual Franciscan friar is especially significant as the Catholic Church observes the Year for Consecrated Life."

Allegations cause Minnesota archbishop to remove himself from ministry

Who are the bishops pushing Communion-denial efforts?