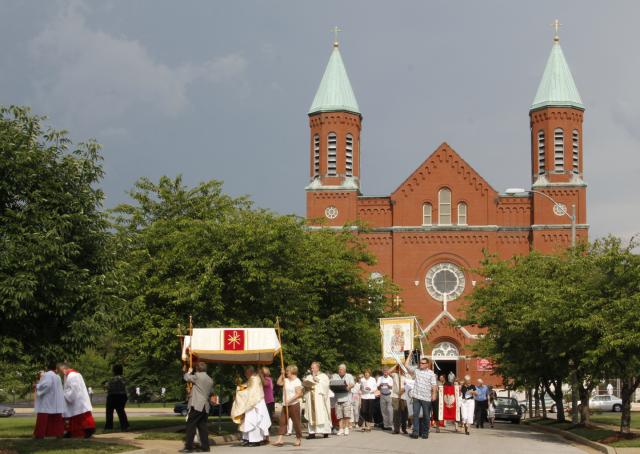 Parishioners at St. Stanislaus Kostka Church in St. Louis process outside the church during a celebration of the Feast of Corpus Christi in 2011. (Photo courtesy of Patricia Darek)

Parishioners of a Polish Catholic church in St. Louis are celebrating after a judge ruled last week that Archbishop Robert Carlson and the St. Louis archdiocese have no right to claim control of their parish and its property because of a unique 19th century legal contract.

The decision, which came after almost a decade of dispute over St. Stanislaus Kostka Church, was issued Thursday in a 50-page ruling by St. Louis Circuit Court Judge Bryan Hettenbach.

At the center of the case, in which Hettenbach took two years to issue a decision, seemed to stand complicated questions of the entangling of church and civil law. In the end, however, it came down to an everyday contract dispute.

Finding that he had no power to invalidate an 1891 agreement the archdiocese made with the parish, which ceded title to its property to a board of directors incorporated under Missouri law, Hettenbach writes in the ruling that while "the Archbishop may own the souls of wayward St. Stanislaus parishioners ... the St. Stanislaus Parish Corporation owns its own property."

The ruling, in which Hettenbach found in favor of the parish on nine of 13 counts, seems to draw to a near-close a chapter that has roiled the St. Stanislaus church community since 2003, when the parish board refused a demand by then-St. Louis Archbishop Raymond Burke to change its bylaws to allow the archdiocese ultimate control of its financial resources and property.

It's a chapter that first saw the removal by Burke of the parish's priests, then an announcement by the archdiocese that the parish had broken away from the Catholic church, and eventually, in 2005, the formal excommunication of the parish board and the laicization of Fr. Marek Bozek, a priest the parish recruited that year to serve the community.

A spokesperson for the archdiocese said in a brief email Tuesday that "there is nothing more we can say at this time" as it "will appeal this decision." A press statement released by the archdiocese Thursday said it would take the case "all the way to the Supreme Court if necessary."

One of the lawyers representing the St. Stanislaus community, however, said in a phone interview Monday he didn't think any appeal would find success as "the court's opinion is unassailable."

"This case does not, in my judgment, break any new ground," said Richard Scherrer, a partner with the Armstrong Teasdale law firm. "It is decided under well established Missouri law and constitutional law."

Bozek, who still celebrates Mass and the sacraments at the parish, said he had been "walking on the clouds" since announcement of the decision

"[Sunday] in the church was just like the best Christmas ever," he said. "We had big crowds at all three Masses. The music sounded better. And the people looked happier. Everything was like you were looking through a pink glass. It was amazing."

While Bozek has previously been reported as affiliating himself with a number of independent Catholic churches, he said that at this time, "my only superior is the parish of St. Stanislaus."

Notable in the ruling is the fact that Hettenbach delves into questions of canon law surrounding the parish, at times citing entire sections of the Code of Canon Law at length and making reference as well to writings by canon lawyers, including Fr. John Beal, a professor at The Catholic University of America.

Ultimately, however, Hettenbach writes that his decision hinged on civil, not canon, law.

Hettenbach briefly describes the history of the ownership of parish, which was first founded and run by Franciscans in 1880. While the deed to the land housing the original parish was ceded from the Franciscans to the archdiocese in 1888, in 1891 the parish decided it needed to borrow money to erect a new church building.

Hettenback says the archdiocese's decision to transfer title to the parish to the corporation effectively ended archdiocesan control of its property.

"By this conveyance, the property was alienated from the Archdiocese and passed to the civil corporation and thereby it ceased to be 'church property' since it was no longer owned by a canonical moral person," the decision reads.

For that reason, Hettenbach states he could not find in favor of the archdiocese's request to impose a trust on the parish that would effectively place it back in archdiocese control.

In its statement, the archdiocese says in his ruling, Hettenbach "agreed that the corporate purpose of the parish corporation is to maintain a Roman Catholic Church."

"The Vatican has determined that the corporation ... has transformed St. Stanislaus into an entity which has no resemblance to a Roman Catholic parish," the statement continues. "Archbishop Robert J. Carlson has supported the determination of the Vatican and has tried to work with the parish to bring it in communion with the Roman Catholic Church once again."

In the interview, Scherrer said the case hinges on "basic" principles of law.

"It's pretty basic, fundamental, contractual law to me. The parish had a deal with the archdiocese. They owned and controlled the property. In return, the archdiocese provided them with priests. And then one day, unilaterally, without justification, [the archdiocese] wanted to change it," he said. "But, a deal's a deal."

For his part, Bozek said no matter the legal success, there is still a certain sadness over the lack of formal relationship between his community and the archdiocese.

"There is no question we feel disappointed and saddened that that part of our life has been terminated by the archbishop," Bozek said. "And that's very unfortunate."

Referencing the promise in the archdiocesan statement that the archdiocese would appeal the decision, Bozek asked: "Is this the most important battle they want to wage when they have so many issues to struggle with?"

"That's what's most disappointing with this," he continued. "That's not what we should be focusing on as Catholics today."

But for one key St. Stanislaus parishioner at least, disappointment doesn't have the final say.

Speaking in a brief phone call, Janice Merzweiler, a parishioner of 50 years who currently chairs the church's board of directors, said the experience has taught her that "you just can't give up hope."

"You have to stick together," she said. "And just keep the prayers up."

A radical shift away from a church with inflexible laws