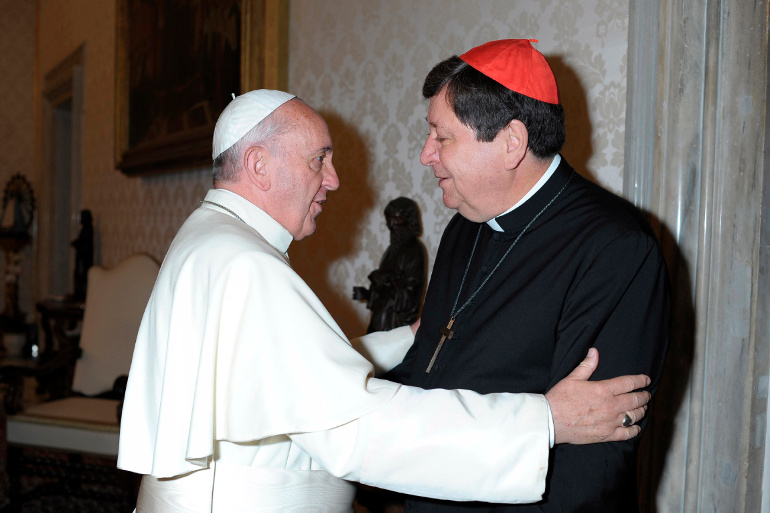 Pope Francis greets Brazilian Cardinal Joao Braz de Aviz, prefect of the Congregation for Institutes of Consecrated Life and Societies of Apostolic Life, during a private audience at the Vatican Oct. 5, 2013. (CNS/Reuters/L'Osservatore Romano)

As the Catholic church prepares to launch a year in honor of priests, brothers, and sisters in religious orders around the world, the Vatican office in charge of the effort called Wednesday on the religious to express joy in their vocations.

Launching a new letter directed to the estimated 900,000 men and women in orders globally, the Vatican's office for religious asked them to be "expressions of great joy in the world."

"We want this to be something that we do all together," said Cardinal João Braz de Aviz, speaking to a packed audience of religious at the Pontifical Urbaniana University. "This is a time for togetherness, for unity in diversity."

Braz de Aviz is the prefect of the Vatican office, formally known as the Congregation for Institutes of Consecrated Life and Societies of Apostolic Life. Pope Francis announced in January that the Vatican would dedicate 2015 to religious life, with the hope that the religious would "wake up the world" with their testimony of faith.

The event Wednesday was held to launch a new letter for religious to reflect on as the year begins from the cardinal and Archbishop Jose Rodriguez Carballo, the congregation's secretary. The letter, titled "Rejoice," was released Wednesday in Italian but is planned to be released also in English, Spanish, and Portuguese.

Explaining the letter at the event, congregation under-secretary Adorers of the Blood of Christ Sr. Nicla Spezzati focused on its third part, which is a series of questions for reflection for religious written by Francis.

"In this third section are placed all of the questions that Pope Francis has made to consecrated men and women and their relations in the church," said Spezzati. "We want for this to be the deepest reflection so that we can reflect on the style of the letter."

Spezzati told the religious to consider the parts from Francis as "something that it is from someone you love, something you hold with care. And it is something you read over and over again."

"Pope Francis is the one who sends this letter," she said. "His hopes and dreams in these few pages ... reveal themselves as if they were in a mirror."

Among events being organized to mark the occasion during that time-span, Braz de Aviz said the congregation was ready to announce six meetings: