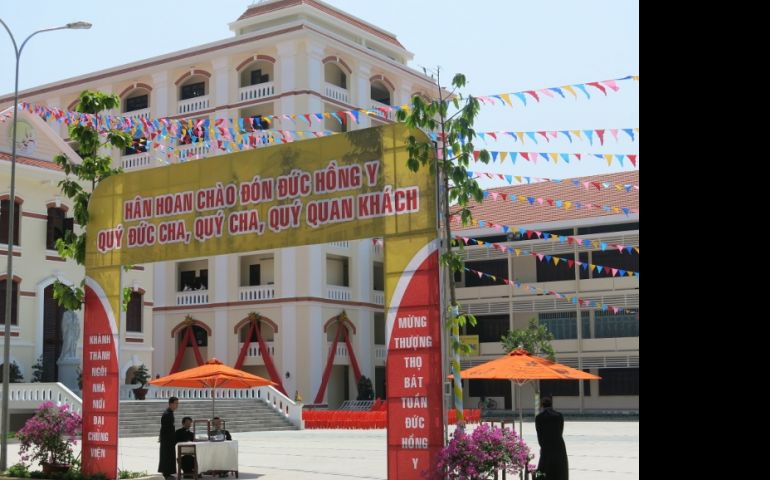 St. Joseph Major Seminary is decorated with a colorful gate and flags on its inauguration March 22. (Joachim Pham)

Ho Chi Minh City, Vietnam — Major seminaries are erecting new buildings and upgrading basic facilities to meet the growing need of giving priestly formation to students in Vietnam. This comes amid a relaxation of seminary enrollment rules by the government.

Cardinal John Baptist Pham Minh Man of the Ho Chi Minh City Archdiocese told NRC that in recent years the government has eased its limitations on recruitment, priestly ordination and the reshuffling of priests.

“Now we are allowed to recruit students every year and to inform the government about seminary enrollments, priestly ordinations and the transfer of priests – without asking for government permission first,” he said.

In the past his St. Joseph Major Seminary was only allowed to recruit 40 students from the archdiocese and the neighboring dioceses of My Tho and Phu Cuong once every two years.

Students used to have to be approved by the government before entering local seminaries, and many were not allowed to join.

Cardinal Man, 80, who retired a month ago due to his age, said the 151-year-old seminary’s 40 annual student recruits spend seven years studying philosophy and theology before their ordination. St. Joseph Major Seminary, where the cardinal himself studied, was not able to afford adequate accommodation for the 300-some students and teachers, though.

To make more room, in 2012 the local church began to build a new seven-story building and to upgrade its four existing ones built between 50 and 80 years ago. The new seminary complex includes a chapel, multi-purpose hall, library, computer room, museum, living room, classrooms and other facilities.

At the ceremony Fr. Joseph Do Manh Hung, the seminary’s vice rector, said at that in 2015 they plan to start recruiting 45 students a year – 25 from the archdiocese and 20 from the two other dioceses.

He said 31 local bishops and 1,428 priests have graduated from the seminary since its establishment in 1863.

Two major seminaries in the central cities of Nha Trang and Hue are also building new facilities, and a seminary in the northern Vinh diocese just completed its new additions last year.

The path of vocation

In 2013, nine major seminaries throughout the nation served 2,076 seminarians from the 26 dioceses, which hold pre-seminary courses for interested students.

Formation priest Fr. Joseph Pham Quoc Tuan said Ho Chi Minh City Archdiocese has four groups of youths who are seeking priesthood vocations. These young men ages 18 to 25 and recommended by their parish priests, live at home while studying at local universities or colleges. They meet their priests for spiritual guidance three days a month.

He said after they finish their college studies, they take an exam; only 40 of them are admitted into a pre-seminary course in spirituality, human values and community life. They live together at the pastoral center for one to two years before they are selected to enter the major seminary.

Fr. Tuan, 49, who with another priest is in charge of one group of some 60 students, said many following a vocational call to the priesthood are inspired by parish priests and by their parents, who want their children to be respected in the community.

He said his students are repeatedly given the question, “Why do you want to become a priest?”

Many say they choose to become priests because they want to celebrate Mass, be held in high respect or be secure in life. Some say they are doing so to satisfy their parents, although “they do not understand what priesthood is.”

Some from poor families pretend to be interested in vocations to get scholarships from priests for their studies, he noted. Such people leave their vocation after they graduate college.

“We have to help students gradually find their real call to the priesthood and abandon such first ‘secular’ motivations,” he said.

Fr. Tuan, who was ordained in 2001, admitted that his first motivation for joining the priesthood was that he liked to play soccer with the Salesians at their local monastery.

“I gradually found my call and decided to enter the seminary,” he added.

“Priests are missioners who carry out God’s work. They have to bring God’s love and life to people by improving their material and spiritual life, giving them access to education, health care and other basic human rights,” he said.

He said he built the church building, parish house and other facilities to provide free accommodation, food and health care for the elderly, people living with HIV/AIDS, and the poor – regardless of their backgrounds. He also set up a mission station (small chapel) on the outskirts of the city, which serves 1,300 Catholics.

However, Fr. Tuan also admitted that some priests fresh from the seminary lack courage and determination to work in disadvantaged areas.

He said one young priest who was recently assigned to a mission station on the city's outskirts told him that he did not want to work there, where there are no facilities and the people live in poverty. He wanted the cardinal to transfer him to another place.

It is a challenge for young priests in a fast-changing society where, youths are attracted by materialism and consumerism.

Fr. Tuan said he is much concerned about the question a lay Catholic man asked him a couple of years ago: “Do you think luxurious seminaries would produce priests who seek consumerism?”

Despite these challenges, Vietnam has become a place to provide young vocations to congregations around the world.

Cardinal Man said some 150 foreign congregations send their members to Vietnam and quietly seek local vocations. A dozen of them have established their convents, monasteries or study houses to train here.

Conference on 'Amoris Laetitia' was dialogical, grounded in reality