Will Ferguson be a tipping point for black youth voter turnout? 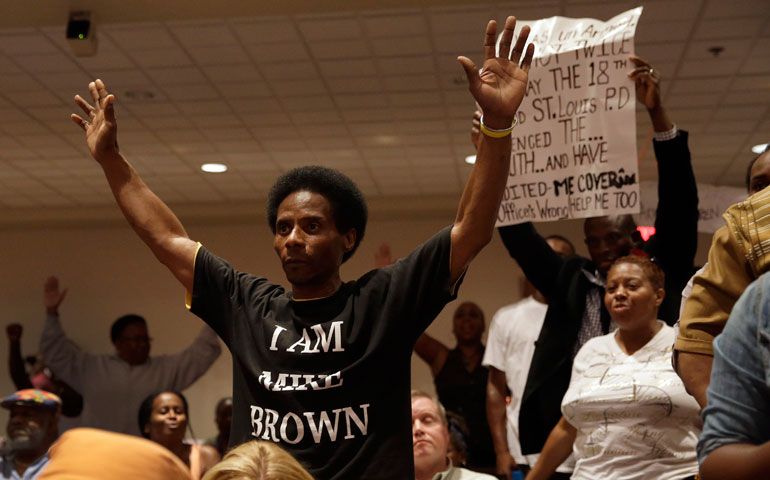 Larry Miller holds up his hands after speaking during a public comments portion of a City Council meeting Sept. 9 in Ferguson, Mo. (AP Photo/Jeff Roberson)

Washington — Civil rights leaders hope to increase African-American youth voter turnout by citing the police shooting death of Michael Brown in Ferguson, Mo., a city where only 12 percent of registered voters turned out to vote in the last city council elections.

Community organizers in New Orleans and Houston -- two cities with a long history of confrontations between African-Americans and the police -- have mixed views on whether outrage over Ferguson will translate into voter participation.

Ferguson may be a rallying call in New Orleans, but it won't be the dominant theme for staff and volunteers as they work voter registration tables around the city, says Erica Buher of VAYLA New Orleans, a multi-ethnic community organization focused on youth empowerment.

Big Easy youth are attuned and empathetic to Brown's killing on Aug. 9, but, according to Buher, "what happened in Ferguson happens frequently in New Orleans." Young people have their own Michael Browns to focus on. Their names, Buher says, are virtually unknown outside the city.

Buher remembers when the police officer -- convicted of shooting Ronald Madison on Danziger Bridge in Hurricane Katrina's wake -- was freed after a court upheld his appeal in September 2013. James Brissette, 17, also died on the bridge from police gunfire. Henry Glover was killed in a separate Katrina incident. The police officer charged in his death was also acquitted on appeal last year in December.

"The court's reversal [in the Glover case] hit the community hard," Buher said.

Just weeks ago, Armand Bennett, a 26-year-old African-American man, was shot twice in the head during a New Orleans police traffic stop by an officer who allegedly turned off her camera before the confrontation. The incident initially went unreported to the public by the police superintendent's office. Buher says it reminds people all over again of the New Orleans Police Department's lack of transparency.

"We will work to register voters through National Voter Registration Day up until Oct. 6, which is the last day for us," Buher said.

Some 23 sites include college and university campuses, as well as organizations like Covenant House and Liberty's Kitchen, which offer services to the homeless and to formerly incarcerated juveniles, respectively.

"We work hard to reach that 18- to 24-year-old transitional age group because they're such a critical age and they're the hardest to reach," Buher explained, adding that in Louisiana, "you can actually register to vote when you're 16. A lot of that under-18 age group is pushing back on the concept that voting is the only way you can be civically engaged."

In Houston, Christina Sanders, the director of the Texas League of Young Voters Education Fund, is convinced that Ferguson has been an "aha moment" for some of her city's youth, and a catalyst that may yield an increase in voter registration rolls.

"This is a time when I've seen more young people connect to the power of the ballot," Sanders said. She attributes increased interest to social media. "Social media, like Facebook, and the ability to connect with people around the country who are saying the same thing, feeling the same way, that changes the conversation."

Sanders concurs with Buher that voter registration is not a panacea or silver bullet to foster change, but the Houston native sees voter registration as the gateway for young people to become more involved in determining how to define and address critical concerns within their communities.

"Youth should not expect everything to happen overnight, because things didn't get the way they are overnight," Sanders said. "Voter registration isn't sexy, but if you connect with young people about Ferguson and how it affects people's lives on so many different levels, you have the capacity to build on the fire in people's bellies. You can build these small fires into a firestorm. What I say to young people is that voting is an opportunity, but your job is to constantly participate."

Sanders maintains that Ferguson has brought out a higher level of interest among African-American youth in Houston than any single recent incident, an observation about other cities that is shared by Hazel Trice Edney, former editor in chief of the National Newspaper Publishers Association and current president of the Capital Press Club in the District of Columbia.

After a recent visit to Ferguson, Edney had intense discussions with the media writing class she occasionally teaches at Howard University as an adjunct professor.

"The students are extremely interested in what's going on in Ferguson," she said. "They wanted to know about the disposition of the people, about the next steps the community plans to take. Even more than the Trayvon Martin shooting almost two years ago, Michael Brown's death has been a wakeup call to many communities."

Edney found the stories Ferguson residents told her about police abuse to be appalling, but Brown's death seems to be a tipping point. "People are in a mood for action. They feel it's time to do something."

Parish | Will Ferguson be a tipping point for black youth voter turnout?

Sr. Simone Campbell has advice for the 'religious left'

Data mining gets religion as campaigns target voters of faith