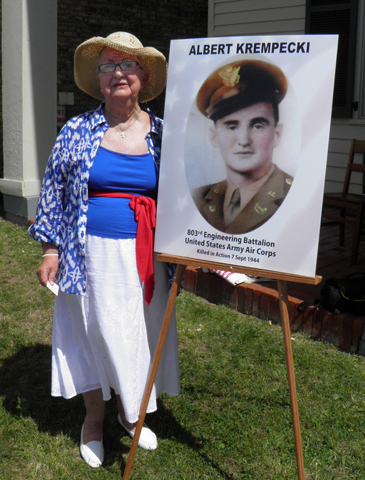 Stella Gumino poses next to a photo of her brother, U.S. Army Pfc. Albert Krempecki, who was killed while trying to help a fellow prisoner in World War II, during a Memorial Day ceremony in South River, N.J. (CNS/The Catholic Spirit/Chris Donahue)

The house at the end of Herman Street where the Krempecki family once lived is long gone, a victim of flooding from the body of water that gave the borough its name.

But in 1941, 11-year-old Stella Krempecki's heart was filled with joy when she saw a familiar face near her home, which was then filled with several siblings and her recently widowed father.

The face belonged to Stella's beloved brother, Pfc. Albert Krempecki, who had enlisted in the Army June 3 of that year, six months before the Japanese drew the United States into World War II by attacking Pearl Harbor. Now Stella Gumino, she said it would be his last visit home.

"Why he was a favorite [brother] of mine I am not sure because I had other brothers," she said. "I remember him going off and joining the Army. The last recollection I have of him is coming home on a leave, walking down Herman Street and I am walking up Herman Street and I spotted him and I raced up to him and he threw me up in the air."

This year at a Memorial Day ceremony on Main Street, just a few blocks from where Albert and Stella were raised and went to Mass at St. Mary of Ostrabrama Church, Stella received 10 U.S. Army medals and ribbons posthumously for Albert's actions in the Pacific Theater of Operations.

Gumino, who is a member of St. Mary of Ostrabrama Parish, cited the persistence and perseverance of her son, Michael, for obtaining the awards. At the ceremony, he gave a presentation on his uncle's military career.

According to his research, Albert was posted to the Philippines in October 1941 to build military installations. After the Japanese invaded, his unit was converted to infantry. Out of 800 men in his engineering battalion, about 250 were killed in action.

In April 1942, Albert was captured and he and his fellow soldiers were part of the Bataan Death March, the Japanese Army's forcible transfer of 60,000 to 80,000 Filipino and American prisoners of war -- on foot -- from one camp to another 60 miles away.

According to two eyewitnesses who visited the Krempeckis' home in 1945, Albert was shot while swimming to the aid of another POW.

Several days before the Memorial Day ceremony, Michael Gumino, who was raised in Spotswood and Immaculate Conception Parish there before moving to Newtown, Pa., and most recently, Denver, said he was inspired to seek recognition for his uncle because he had always been interested in military history and was impressed by the stories he heard about him at family reunions.

"I started doing research into his military record using the Freedom of Information Act and such and found his records didn't exist. He had basically no decorations [other than a Purple Heart] considering he had a fairly interesting few years in the military."

Part of his research included talking to other survivors and reunion groups. It took about 10 years to gather the information, then two years to file appeals with the U.S. military.

"No one knew that he was entitled to anything else," he told The Catholic Spirit, newspaper of the Metuchen diocese. "His parents were both from Poland. They weren't well-versed in military and U.S. procedures and they didn't know who to ask. And he was one of 12 children and the family just didn't have the time."

Stella Gumino recalls growing up in a strong Catholic family as members of St. Mary of Ostrabrama Parish, where she is once again a member. Two infants died before she was born and her mother died in 1940.

Her father was a mason who built many homes in South River, Milltown and the East Brunswick area. "My father was strict. At bed time you went to bed and didn't hang around downstairs," she said. "Sunday was a church day, no work was done in the house and we had our main meal together."

Before enlisting in the Army, Albert worked on a surveying team as part of the New Deal that took him to states as far away as Minnesota judging by postcards the family received.

Now the last surviving sibling, she said she was not surprised to learn how Albert died because of his concern for others. The two military men who visited their home said when he was a POW, Albert was assigned to the kitchen. He took food to help his fellow prisoners and was punished by his captors for it.

"Growing up, I did miss him terribly," she said. "I get filled up ... that episode of him running down Herman Street and me jumping up into his arms has left its mark on me. I do think of him. He was so young."

[Chris Donahue is associate editor at The Catholic Spirit, newspaper of the diocese of Metuchen.]