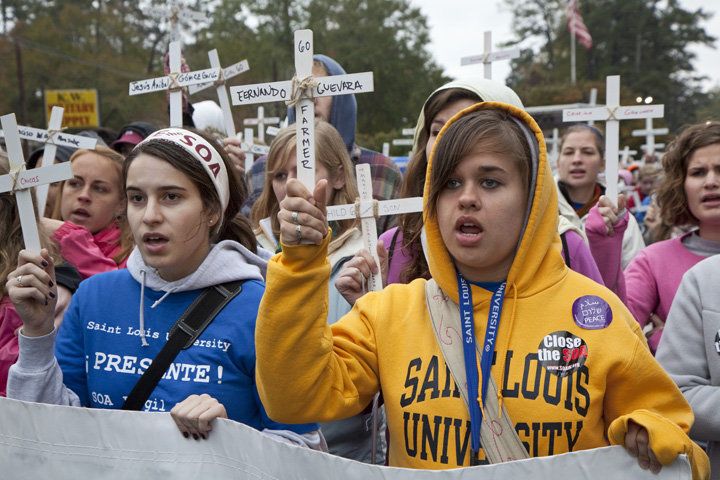 A Freedom of Information Act request has revealed that School of the Americas Watch, a nonviolent human rights organization founded by a Maryknoll priest, was investigated and infiltrated by the Federal Bureau of Investigation for at least a decade.

The 429 pages of documents -- which were obtained by Washington D.C.-based lawyer Mara Verheyden-Hilliard -- also show SOA Watch was under surveillance by a consortium of law enforcement agencies that included the FBI’s counter-terrorism division, said Loyola Law School Professor Bill Quigley of the SOA Watch Legal Collective, who is referred to in one FOIA document without mentioning his name.

In comments to NCR, Quigley, who authored a summary of the FBI documents, said the FBI surveillance has had a chilling impact on some SOA Watch activists. “Even people who have been involved in this movement for a long time were chilled by the fact that they were being subject to counter-terrorism monitoring and surveillance,” Quigley said.

The released files, which are heavily redacted and did not include 75 pages that were withheld from the release, cover the years 2001-2010. The report was released just a week prior to the SOA Watch’s 25th anniversary gathering at Ft. Benning in Columbus, Ga., where most of the FBI’s surveillance was conducted.

The annual protest began as an effort to close the U.S. Army School of the Americas, an Army training school for Latin American soldiers, some of whom carried out human rights abuses and murders in their native countries. The school is now called the Western Hemisphere Institute for Security Cooperation. SOA Watch was founded in 1990 by former Maryknoll priest Fr. Roy Bourgeois, who once served as a Latin American missionary.

In a document dated Oct. 3, 2005, the FBI requested that the SOA Watch protest be designated as a “Special Events Readiness Level” (SERL). Quigley said SERL events involve coordination between local law and state law enforcement, the Department of Homeland Security, the FBI, and the Federal Emergency Management Agency “with the U.S. Secret Service designated as the lead agency.”

Despite no incidents of violence over the multi-year period of the gatherings, the FBI justified its activities by claiming that other groups, such as anarchists, could join SOA Watch events and cause problems. “The peaceful intentions of the SOA Watch leaders has been demonstrated over the years,” the 2005 report noted. “The concern has always been that a militant group would infiltrate the protestors and use of the cover of the crowd to create problems. At this time, there are no specific or known threats to this event.”

An Oct. 23, 2003, FBI memo refers to “The Americas Anarchist Movement” and notes that the bureau was “concerned that factions of a radical cell will travel to [the SOA protest] and may implement or instigate violent and destructive behavior.”

Past media accounts in NCR have shown that nothing like that has ever occurred at any of the two dozen annual SOA Watch protests at Ft. Benning.

Verheyden-Hilliard, executive director of the Partnership for Civil Justice Fund, the group that made the FOIA request, said the FBI has an institutional history of justifying its actions as necessary to prevent otherwise nonviolent groups from being infiltrated by those with bad intentions.

“When you criminalize dissent or make peaceful dissent have the appearance of criminal character because of its response to it, it can’t help but impact people’s ability to come out and express their point of view,” Verheyden-Hilliard told NCR.

“But at the same time, the FBI and Department of Homeland Security engage in this following a long tradition of American law enforcement and intelligence agencies acting this way against political and social justice movements in the United States. …

“It’s basically where federal and local enforcement begin to set themselves up as if they’re engaged in paramilitary operations against peaceful protesters.”

Verheyden-Hilliard said the SOA Watch files show a pattern used by the FBI to justify its actions from year to year.

"And by that logic every single mass gathering in the United States could be deemed by the FBI to have potential terrorist activity," she continued.

Verheyden-Hilliard said the FBI’s monitoring of SOA Watch was “a significant expenditure of taxpayer dollars” used to monitor the activities of what she called a group of “pacifist nuns.”

Ironically, said Verheyden-Hilliard, “SOA Watch is an organization that had dedicated itself to actually trying to find U.S.-trained terrorists, who are then sent to other countries. They’re as far from terrorists themselves as you can get.”

FOIA documents show that in September 2004 the FBI communicated with a confidential informant who handed over a “compiled manual for affinity groups, with telephone number of Legal Advisor from Loyola University (Louisiana)” and provided the FBI with the names and email addresses of people associated with SOA Watch.

“To have this event and this movement for human rights categorized as subject to counter-terrorism and these sorts of things is scary to people, and it’s very sad,” said Quigley.

Bourgeois said local law enforcement and other groups like the FBI were never able to show that SOA Watch was anything but peaceful.

“Our actions were always rooted to nonviolence; connected in solidarity with the people of Latin America," said Bourgeois. “Our goal is to shut down the School of the Assassins as it became known. There were times that I felt they [law enforcement agencies] were kind of hoping maybe to find something they could use to discredit us. They never did.”

SOA Watch has made all 429 pages from the FBI files available on its website, along with a summary of the material.