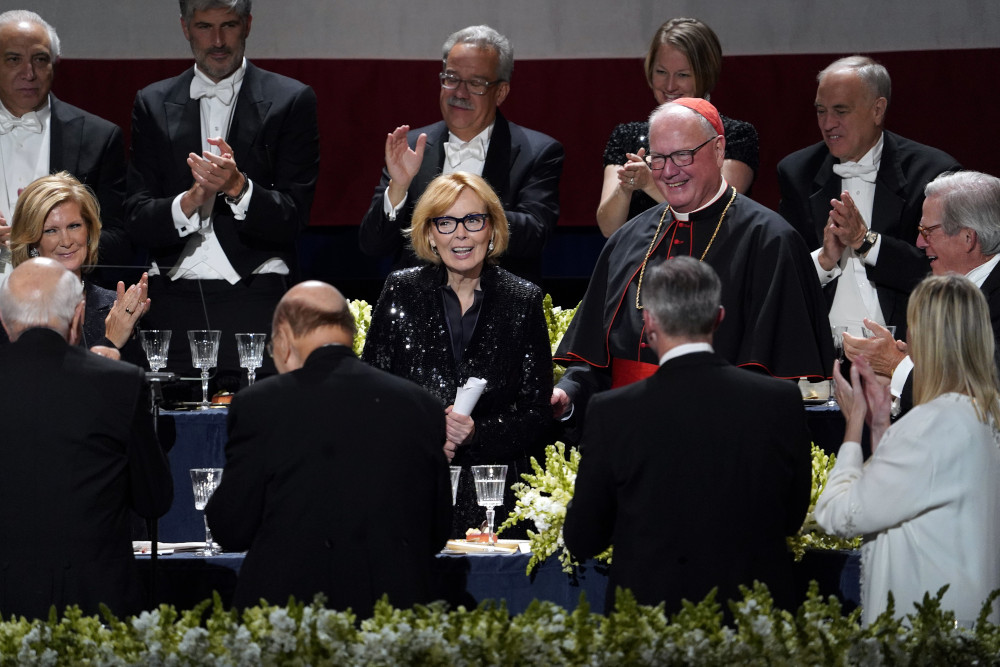 At the 77th annual dinner of the Alfred E. Smith Memorial Foundation, Pulitzer Prize-winning political columnist and author Peggy Noonan asked participants: "How can you not be romantic about life?"

Noonan, keynote speaker at the Oct. 20 event, invoked the example of her faith-filled Irish immigrant great aunt to urge the dinner guests to keep in mind the romance of life, to see it, appreciate it and bring it into their work, emphasizing that despite burdens and pressures of everyday life, people should maintain a sense of the mystery, the unseen things and the feats of love and valor.

Noonan said her great aunt Mary Jane Byrne experienced the turbulence many immigrants feel as they let go of one life and "gain purchase in a new place." Byrne worked as a private maid on Park Avenue and had a natural love for poetry, history and politics.

As a young speechwriter for President Ronald Reagan, Noonan said she "tipped her hat" to her great aunt, who "declaimed popular poems in a great Irish accent." She borrowed one of Byrne's favorite poetic refrains for remarks the president made on his return from an overseas trip: "But it's home again, and home again, America for me."

The Al Smith dinner honors the memory of the former four-term governor of New York, who was the first Catholic nominated by a major political party to run for president of the United States. This year it was held at the Park Avenue Armory in New York City.

New York Cardinal Timothy M. Dolan hosted the evening, which drew more than 600 guests and raised close to $6 million. Both are new records for a year in which the presidential nominees were not the headliners. Proceeds from the $5,000-a-plate event benefit Catholic organizations that support needy women and children and provide aid to refugees.

The festive event is a see-and-be-seen stop on the autumn social calendar for political, religious and philanthropic New Yorkers. Among those sharing the three-tiered dais were New York Gov. Kathy Hochul and Lee Zeldin, her challenger in the November election, New York City Mayor Eric Adams, Senators Chuck Schumer and Kirsten Gillibrand and New York Attorney General Letitia James. Among the new faces this year were Ukrainian Catholic Archbishops Borys Gudziak of the Archeparchy of Philadelphia and Paul Chomnycky of the Ukrainian Catholic Eparchy of Stamford, Connecticut, along with Sergiy Kyslytsya, Ukrainian Ambassador to the United Nations.

Noonan entered into the traditional spirit of the event, which calls for speakers to poke gentle fun at themselves and others. As waiters offered guests a choice of wines, she said the Al Smith Dinner is "kind of like the National Prayer Breakfast with liquor."

She recounted a breakfast conversation with House Minority Leader Kevin McCarthy who told her: "Jesus loves America the best and that's why the Bible is in English."

Noonan observed that Senate Majority Leader Schumer has been in Congress so long that "medically he's considered a preexisting condition."

She also speculated about potential candidates in the 2024 presidential election. She said the White House is downplaying President Joe Biden's upcoming 80th birthday. "Internal memos about it have such high security classification that copies have been found at Mar-a-Lago," she joked.

While Noonan said Florida Gov. Ron DeSantis looks to be the most focused and ambitious candidate in the Republican field, he has an unnerving look in his eye. "Is it me or do you get the feeling he would unplug your life support to charge his cellphone?" she asked.

During the dinner, the Happy Warrior Award was presented to Peter T. Grauer, chairman of Bloomberg, the financial, software, data, and media company. The distinction recalls the nickname given to Al Smith by Franklin D. Roosevelt at the 1924 Democratic Convention. The award recognizes someone who epitomizes Smith's character, grace and leadership by making a positive impact on others.

For 20 years, Grauer has served as president of the board of trustees of the Inner City Scholarship Fund and raised more than $400 million for Catholic education. A recent initiative established an endowment to guarantee that every child enrolled in the Catholic schools is guaranteed a seat through high school.

Grauer said he was raised in the Episcopal church "which has all of the pageantry of the Catholic Church but none of the guilt."

"Our Catholic schools are teaching much more than the 3Rs," he said. "They're challenging our students to reach for the stars by setting high standards, guiding their emotional and spiritual development and preparing them for life."

He also pointed out that a $2 million grant from the Al Smith Foundation "saved" the schools during the COVID-19 pandemic when many parents lost their jobs and could not afford to contribute to their children's tuition.

Gudziak, who offered the benediction, asked everyone to join hands as he offered thanks and then prayed for peace. "We pray we never neglect the pulse we feel in the hands of our fellows. We pray for peace for people caught up in wars. There are 20 wars in the world," he said.

"With all people holding hands, I ask for peace in Ukraine," he prayed, adding: "Let us remember the romance of this life. Let us laugh, let us love, let us breach the divides. Let us accept the presence of your Son, the gentle whisper of your Holy Spirit. Let us be in your house as your children."