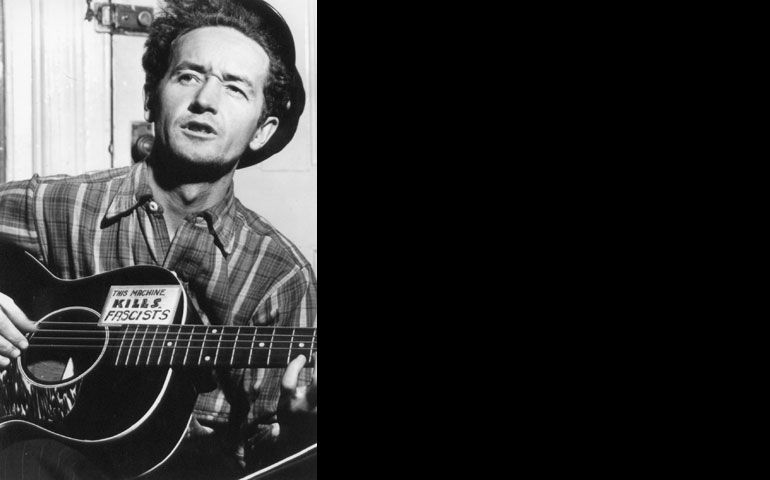 For a few moments in mid-October, the nation will have a chance to enjoy a break from the cravenness of the presidential campaigning by observing the 100th anniversary of Woody Guthrie's birth. On Oct. 14, a grand centennial celebration of his songs and ideals will be staged in Washington at the Kennedy Center for the Performing Arts. At a fortress of the establishment, high praise will be sounded for a rebel of decidedly anti-establishment bents.

Woodrow Wilson Guthrie, who was born in 1912 in Okemah, Okla., and died in 1967 at 55, powered his way through life by writing more than 3,000 songs, an autobiography (Bound for Glory), dozens of notebooks and drawings, and with a willingness to sing wherever the country's broke and broken would gather, from hobo camps to picket lines. His audiences were Depression-era migrant workers, Dust Bowl survivors, and dissidents on the barricades.

Guthrie didn't sing to entertain, he sang to agitate and illuminate. He didn't write songs to lull the masses, he wrote to arouse them. His art sprang from personal experiences, as if he were a beat reporter covering stories the rest of the pack was missing. He called his music "hard-hitting songs for hard-hit people."

From the mid-1930s to the late 1950s, the populist folksinger and his acoustic guitar came forward with songs like "Deportee (Plane Wreck at Los Gatos)," "Vigilante Man," "I Ain't Got No Home," "Hard Travelin'," "Lonesome Valley," "Hobo's Lullaby," "What Are We Waiting On" and "This Land Is Your Land."

The latter would become what Bruce Springsteen called "the greatest song ever written about our home." The song had a high moment on Jan. 18, 2009, at the "We Are One" concert at the Lincoln Memorial celebrating the inauguration of President Barack Obama. Springsteen was joined by Pete Seeger, Seeger's grandson and a throaty chorus of high school and college students. At Seeger's insistence, they sang all the "This Land" verses, including the controversial one that's usually omitted because it faintly knocks capitalism's sacred gospel of property rights:

As I went walking I saw a sign there
And on the sign it said "No trespassing."
But on the other side it didn't say nothing,
That side was made for you and me.

For a time, Guthrie and Seeger, hustling for gigs, traveled the back roads of America, bumming meals and hitting flophouses along the pocked trails that carried Tom Joad westward from Oklahoma in The Grapes of Wrath. They were the original odd couple: Seeger studied at Harvard for a time, with John F. Kennedy a classmate in 1940, and Guthrie never finished high school. "That guy Seeger," Guthrie once recalled, "I can't make him out. He doesn't look at girls, he doesn't drink, he doesn't smoke, the fellow's weird."

In late 1970s I came to know Marjorie Guthrie, who met Woody in 1942 and married him three years later. She was a dancer in the Martha Graham Company. They had two children, including Arlo, who is now 65 and a folksinger who regularly tours. Marjorie had read a column I wrote for The Washington Post about the indifference of Congress to adequately fund research into diseases that received little attention. We met several times, when she educated me about Huntington's disease, which took Woody's life. As a degenerative brain disorder with no cure, it causes loss of body and muscle control, speech and swallowing. It is also called Huntington's chorea -- Latin for dancing -- because a patient's flailing arms and legs give the appearance of choreographic movements. It affects more than a quarter million Americans.

Marjorie, who worked the halls of Congress to lobby for research money for Huntington's, told a story of checking Woody into the hospital. A clerk at the admitting desk asked Woody for his name, address, date of birth. And also his religion: "All of them," he said.

I wrote a column about Marjorie and her caretaking of Woody. They separated near the end of his life but it didn't end their closeness. She sent a thank-you card for the column, with a drawing by Woody on the front and inside were five lines he wrote in 1947:

Love casts out hate.
Love gets rid of all fears.
Love washes all clean.
Love forgives all debts.
Love forgets all mistakes.

We can only move forward if we acknowledge 'dangerous memories'

Fast-food workers push for living wage ahead of Labor Day