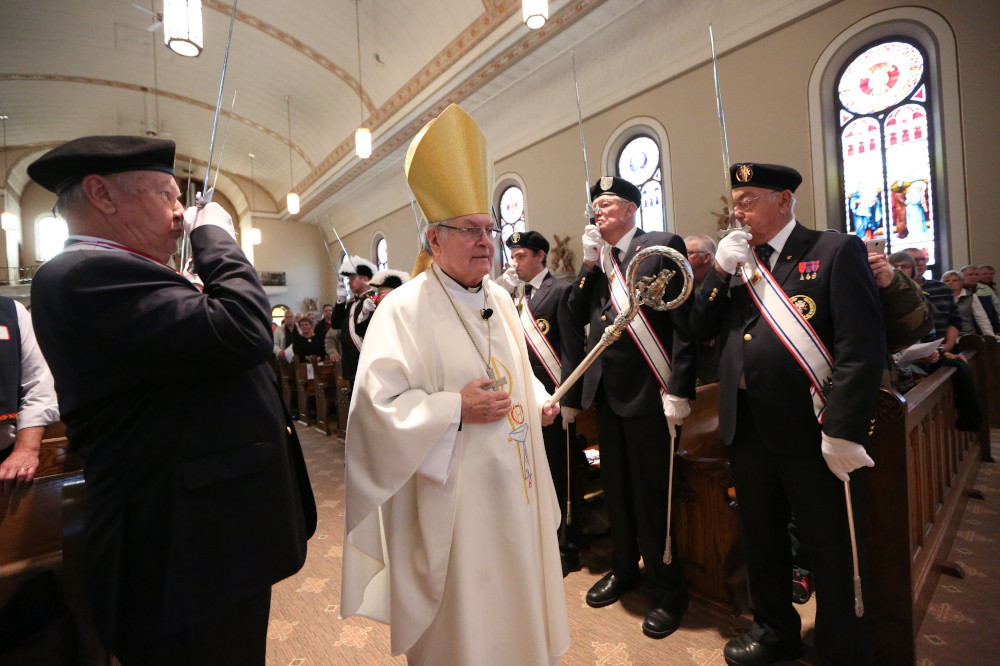 A native of Czechoslovakia who fled persecution by that country's communist regime and served in Minnesota for nearly 30 years before being appointed a bishop in the Czech Republic died Aug. 10 in California. Retired Bishop Peter Esterka was 85.

"He has touched so many people," said Joan Timmerman, who taught theology alongside then-Father Esterka at then-College of St. Catherine, now St. Catherine University, in St. Paul. Timmerman said she retired to Anaheim, California, in 2000 and helped Esterka, who lived simply but traveled extensively, with his mission to Czech Catholics across the United States, Canada and Australia.

Esterka's funeral Mass will be 10:30 a.m. Aug. 20 at Christ Cathedral in Garden Grove, California, with Bishop Kevin Vann of Orange presiding. A Mass also will be celebrated in Brno, Czech Republic, and burial will be in his birthplace, Dolni Bojanovice.

He was appointed auxiliary bishop of Brno and entrusted with the spiritual care of Czech Catholics abroad July 5, 1999, by St. Pope John Paul II. His motto for his episcopal ordination was "Go into the whole world to preach the Gospel."

In 2013, Esterka was awarded the "Gratias agit" award, given in Prague, for helping spread the good name of that country abroad. His resignation as a bishop was accepted by Pope Francis in 2013, but he continued to minister to the Czech Catholic community until 2018.

That was the last year of his public ministry, said Timmerman, who helped write his obituary. It also was the year Esterka returned to Minnesota to celebrate Mass in Czech at St. Wenceslaus in New Prague as part of a two-day festival celebrating the 100th anniversary of Czechoslovakia's formation.

Timmerman said Esterka did not have family in the United States, and when his health began to fail, she took him into her home. He entered hospice in April and died peacefully in her home, she told The Catholic Spirit, newspaper of the Archdiocese of St. Paul and Minneapolis.

As a young man in 1957, Esterka fled from Czechoslovakia to Austria because of communist persecution. He studied for the priesthood in Rome and was ordained in 1963. He earned a doctorate in theology and came to Minnesota in 1967, teaching at St. Catherine's until 1993. He also wrote a book, "Never Say Comrade," about his escape from Czechoslovakia.

While teaching, Esterka also ministered at parishes. He became a U.S. citizen in 1968 and joined the Air Force Reserves in 1974 as a military chaplain, retiring as a lieutenant colonel in 1995. He was based with the reserves in Minneapolis, with the 934th Airlift Wing.

In 1978, Esterka began to devote himself more intensively to work among Czech Catholics in the U.S. and Canada. In 1986, he was appointed vicar for those two countries. In 1994, Esterka's ministry was extended to Australia.

Fr. Michael Skluzacek, director of pastoral formation at the St. Paul Seminary School of Divinity, told The Catholic Spirit that he consulted with then-Father Esterka before going with family members to visit Czechoslovakia in 1984, when it was still under the communist regime.

Esterka was helpful, suggesting that Skluzacek not wear his priestly collar and that he apply for his visa as a teacher, not a priest. With those precautions, the communist regime was likely to know he was a priest, but would leave him alone, Skluzacek said.

"That's what I did, but it was still pretty scary," Skluzacek said. "We were followed in Czechoslovakia."

He still remembers Esterka's kindness and good guidance, Skluzacek said. "He was such a joyful man."