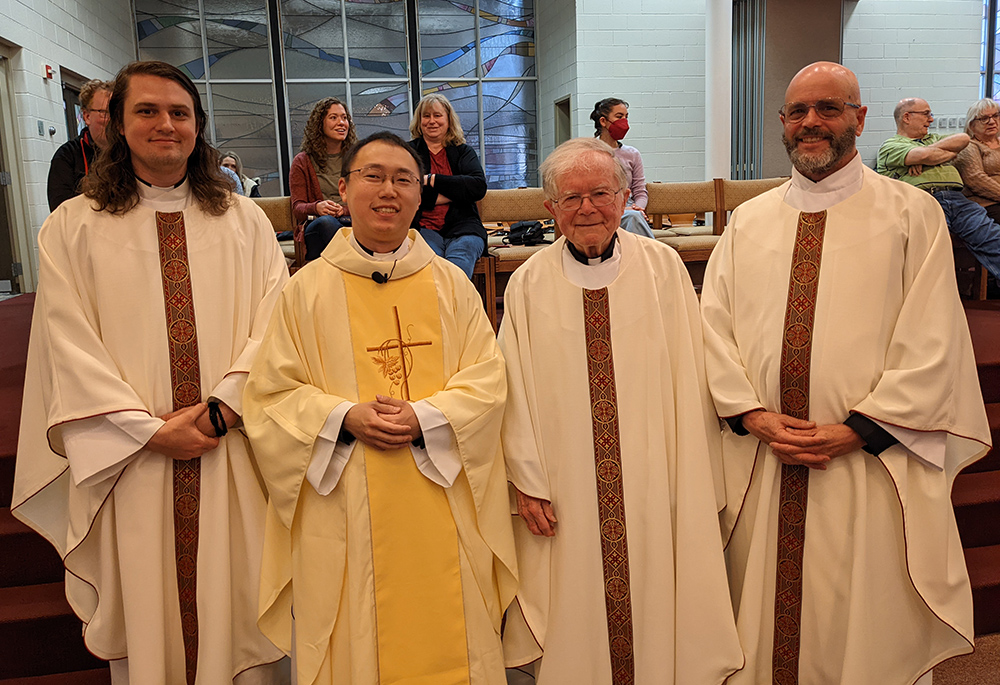 From left: Paulist Frs. Evan Cummings, Jimmy Hsu, Vinny McKiernan and Ed Nowak of the St. Thomas More Newman Center at Ohio State University are pictured in this photo. In late June, the Diocese of Columbus, Ohio, notified the Paulists that it is revoking their campus ministry to incorporate the Newman Center into the diocese. (Courtesy of Paulist Fathers)

Hundreds of parishioners, students and alumni of Ohio State University's St. Thomas More Newman Center have signed a public letter calling on Bishop Earl Fernandes of Columbus, Ohio, to reconsider his decision to remove the Paulist Fathers from their longtime campus ministry assignment.

More than 200 signees also offered short written testimonies extolling the Paulists and describing how their welcoming style of ministry and spiritual direction had been of benefit over the years. Several signees, including Joseph Gentilini of Hilliard, Ohio, credited the Paulists with keeping them connected to the Catholic Church.

"The Paulist Fathers have been very helpful to me in realizing that God loves me, as I am," said Gentilini, who is gay and has attended Mass at the Newman Center for 53 years. Gentilini said he feels that he is losing his spiritual home.

"I don't understand this decision by the bishop," Gentilini told NCR. "I'm sad and angry, not only at what was done but how it was done."

On June 30, the Diocese of Columbus, Ohio, announced that Fernandes was appointing Fr. Adam Streitenberger, the diocesan director of evangelization, to become the new executive director of the Newman Center, effective July 12. 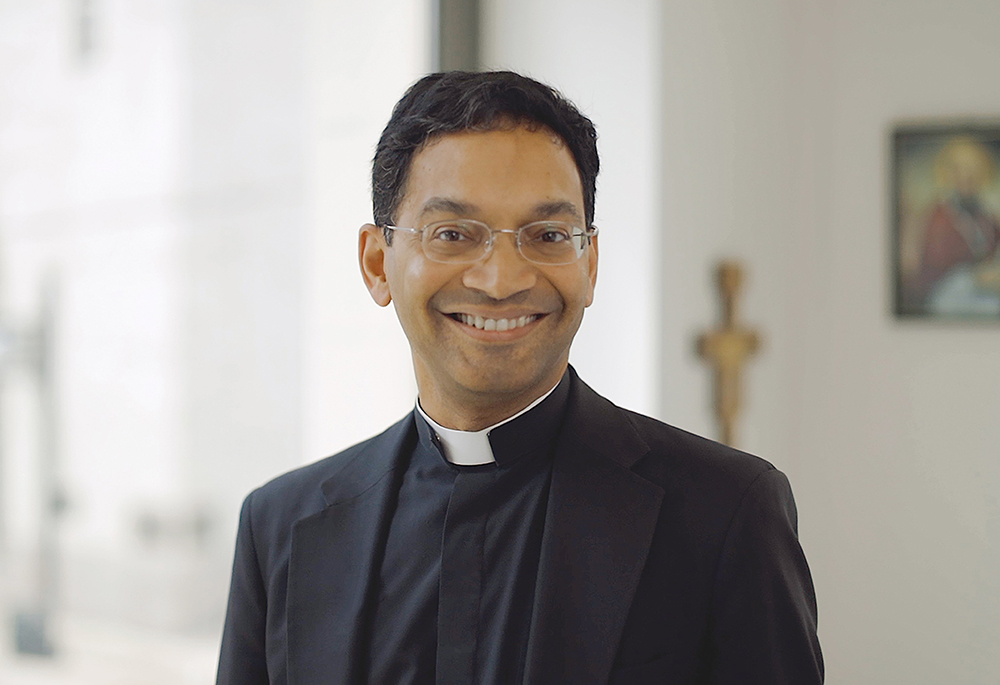 Bishop Earl Fernandes was installed as Columbus' bishop on May 31. He is seen in an undated photo. (CNS/Courtesy of Archdiocese of Cincinnati)

Fernandes, who was installed as Columbus' bishop on May 31, was quoted as saying that Streitenberger's appointment was the first step in "an exciting and renewed vision for vocations and evangelization" in the diocese, in which the Newman Center is to play "a vital role."

The diocesan statement added that the Paulist Fathers were invited to remain as chaplains at the center. The statement also said that all who attend the restructured Newman Center will benefit by "being integrated into the larger life of the Diocese of Columbus."

Jason Mays, a diocesan spokesman, told NCR that Fernandes and other members of the diocesan leadership team have seen the recent open letter and are reaching out to members of the Newman Center community individually to listen to their concerns.

Mays said the diocese's vision for the Newman Center includes a plan to invest "more resources to bolster the good work" that the Paulist priests have already been doing at the center.

"The Paulist Fathers have done great things there," Mays said. "This has to do with coordinating more resources there."

However, that explanation does not satisfy the Paulists, who have been ministering at Ohio State University for nearly 66 years. They and their supporters said that the Paulist priests led a vibrant campus ministry that offered regular Masses, Bible studies, and several activities and events for students. 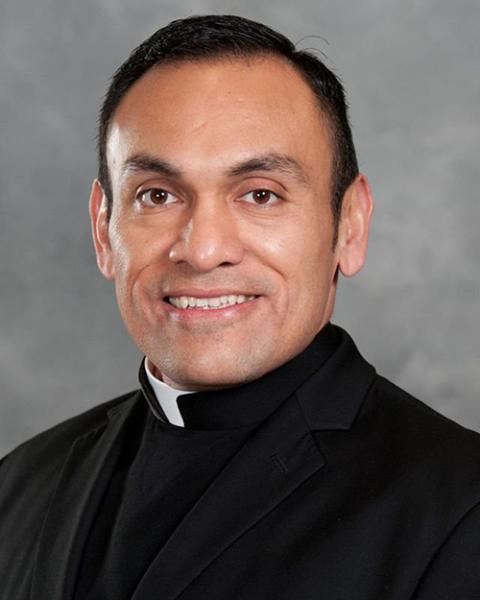 "This [announcement] came on quite suddenly," Paul Snatchko, a spokesman for the Paulist Fathers, told NCR. Snatchko said the diocese's move to take over the campus ministry does not reflect "Pope Francis' admonition of synodality" to listen and journey together.

"We're very sad with what's happening at Ohio State," said Snatchko, who said that Fernandes informed Paulist Fr. René Constanza, the president of the Paulist Fathers, of the diocese's plans for the Newman Center during a meeting in late June.

In that meeting, Snatchko said, Fernandes presented Constanza, who became the Paulist Fathers president on June 7, with a proposed memorandum of understanding that stated the diocese would assume control of the Newman Center and that two Paulist priests could remain chaplains for at least one year. The Paulist chaplains would have answered to Streitenberger.

"We wanted to have [the Newman Center] coordinated through the diocese," said Mays, the diocesan spokesman, who added that the diocese invited the Paulists to stay and "be a part of the vision."

"They discerned that they wanted to go a different direction, and we respect that," Mays said.

After conferring with the Paulists' general council, Snatchko said Constanza declined to sign the memorandum, as the diocese's proposed arrangement did not seem to fit well with the Paulists' charism as a missionary society of priests.

"It's not the practice of the community to operate where two members of the community would be under the direction of a diocesan priest. At the moment it's not how we're doing ministry," Snatchko said.

After declining to sign the memorandum, Fernandes notified Costanza on June 29 that the diocese was terminating the Paulist Fathers' ministry at Ohio State. The bishop added that the Paulists could continue to minister at the Newman Center until July 31 to help facilitate a "smooth transition."

Snatchko said the relatively quick manner in which the diocese moved to assume control of the ministry at the Newman Center raises questions "as to why this had to be rushed."

"I think it is frustrating to the Paulists that a brand-new bishop entered into this conversation with a brand-new president of the Paulist Fathers," Snatchko said.

While the diocese has publicly praised the Paulists for their campus ministry, the proposed memorandum of understanding signals that the diocese intends to move the Newman Center at Ohio State in a more conservative direction.

The memorandum, which NCR obtained, states that the diocese envisions the Newman Center being a setting where "lay apostolates and movements are welcomed and present." The memorandum specifically cites, as examples, Opus Dei, Communion and Liberation, Courage, St. Paul's Outreach and the Fellowship of Catholic University Students, or FOCUS.

"They spelled this out in the memorandum of understanding," said Snatchko, who added that the Paulist Fathers at Ohio State already have working partnerships with missionaries from the Catholic campus outreach program FOCUS and the missionary organization St. Paul's Outreach.

Snatchko said the Paulists are not opposed to Courage, an apostolate whose chapters often use a 12-step model to encourage LGBTQ Catholics to abide by the Catholic Church's official teachings on chastity. But some members of the Newman Center's parish community like Gentilini said they do not support that apostolate.

"I would not feel comfortable anymore in a place that sanctioned Courage," said Gentilini, who criticized the apostolate for using the term "same-sex attraction," which he said does not accurately reflect the entire personality of LGBTQ persons.

Gentilini, who is civilly married to his partner of 41 years, said the Paulist Fathers have made him feel welcomed in the church. At the Newman Center, Gentilini goes to confession, attends Mass, and participates in eucharistic adoration.

"They don't discount the teaching of the church, but they try to make gay people feel welcome in this church in a way that I don't think the other churches do," said Gentilini, who is not sure where he will go next for a parish community.

According to the diocese, the Newman Center at Ohio State is not a parish but rather a diocesan agency where the focus is entirely on student ministry. Mays, the diocesan spokesman, told NCR that "everyone is welcome at the St. Thomas More Newman Center."

"Bishop Fernandes assures that everyone's spiritual needs will be met," Mays said. "Some members may find that their specific needs may be better met in the diocesan parishes."

Many of the parishioners in the Newman Center's permanent resident community drive 30 miles to attend Mass there, "where they feel spiritually nourished," said Paulist Fr. Ed Nowak, the current director of the center.

"We Paulists will land on our feet somewhere," said Nowak, adding that he hopes a special accommodation is made for 91-year-old Paulist Fr. Vinny McKiernan, who has served at the Newman Center for more than 30 years.

While he and the other Paulist priests wait to see what their next assignments will be, Nowak said he remains concerned for the students and the older parishioners in the Newman Center community who he said benefited from each other over the years. He said their testimonies of how the Paulist Fathers benefited them have moved him.

"I've been so heartened by that," Nowak said, "To know how big an impact we've had on them, is just so overwhelming."

A version of this story appeared in the July 22-Aug 4, 2022 print issue under the headline: Bishop's removal of Paulists sparks protest.