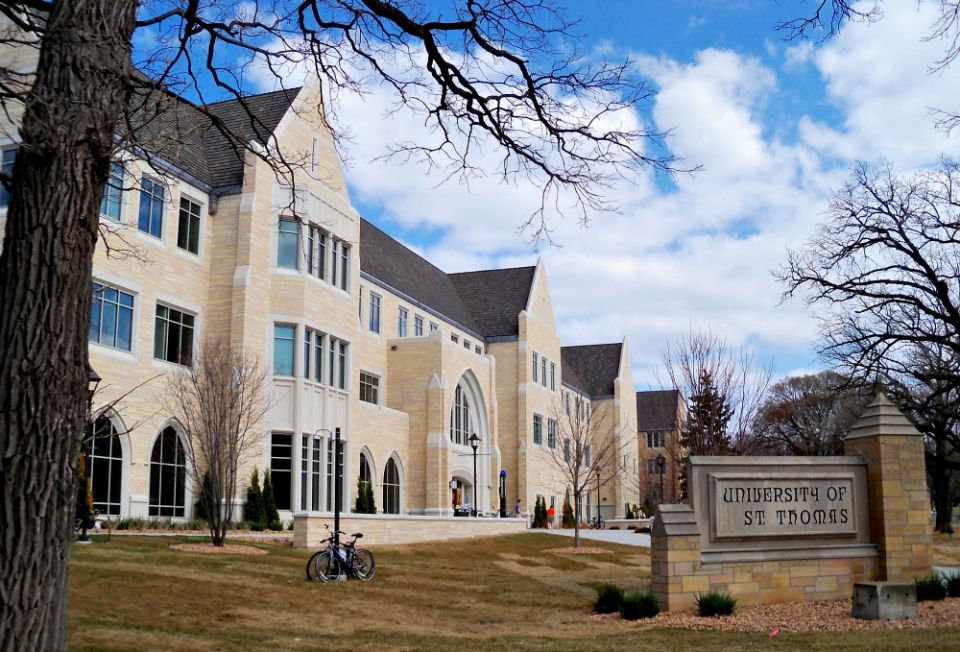 The campus of the University of St. Thomas in Minneapolis (Wikimedia Commons/AlexiusHoratius)

NEW YORK — A major benefit for the Gay and Lesbian Alumni of the University of Notre Dame and St. Mary's College (GALA-ND/SMC) will be held on Sept. 24 at the New York residence of 1957 Notre Dame graduate and television personality Phil Donahue and his wife, actress Marlo Thomas. The benefit will raise money for scholarships for LGBT students at the university and the college, as well as support for LGBT alumni, according to a press release by the group.

The scholarship, which began in 2015, has awarded six scholarships of $2,500 each in the last three years to LGBT students attending Notre Dame and St. Mary's.

The benefit is part of a weekend of events sponsored by GALA-ND/SMC in New York.

WASHINGTON — Students at Georgetown University are celebrating their school's new licensing contract with Nike that guarantees respect for workers' rights. After student protests by the Georgetown Solidarity Committee and United Students Against Sweatshops, Georgetown refused to sign a new deal with Nike until it agreed to the code of conduct, according to a piece by student activists in The Nation. The company acquiesced at the end of August.

Nike had previously been the only Georgetown licensee to not have to sign the university's Code of Conduct, which guarantees that companies' "workers are present at work voluntarily, not at undue risk of physical harm, fairly compensated, and not exploited in any way," and provides for external monitoring of the licensees," according to the university's website.

PARIS — Four students from Boston College who were victims of an acid attack on Sept. 17 while studying abroad in Paris are asking for prayers for the woman who attacked them. Charlotte Kaufman, Kelsey Kosten, Michelle Krug and Courtney Siverling say that they have forgiven the 41-year-old women who apparently suffers from a mental illness, according to the Associated Press.

Krug and Siverling both said on their personal Facebook pages that the four women are safe and should make a quick and full recovery.

"I ask that if you send thoughts and prayers our way," Krug said on Facebook. "Please consider thinking about/praying for our attacker so that she may receive the help she needs and deserves. Mental illness is not a choice and should not be villainized."

GREENVILLE, PA. — Thiel College, a small liberal arts school rooted in Lutheran tradition, has announced that Fardosa Hassan, the first Muslim chaplain of Augsburg University in Minneapolis, will deliver a talk at Theil, according to a press release by the Pennsylvania college.

Hassan's Sept. 27 presentation will be titled "An Introduction to Islam and Muslims in America," and will kick off of a yearlong effort by the college to promote interfaith understanding.

"This is part of the College's ongoing commitment to being an open, inclusive and welcoming learning environment for everyone," Susan Traverso, president of Thiel College, said in the press release. "Prejudice and mistrust grow quickly in the vacuum of the unknown. Events like these are wonderful ways to encourage the spread of tolerance and help us learn about and build trust in each other."

"This program allows students to finish their undergraduate and law degrees in six years instead of seven," Thomas Schneider, associate professor of political science at the University of St. Francis, who is serving as the program's director, said in the press release. "This saves them a year of tuition costs and allows them to advance more quickly in their educations and professional careers."