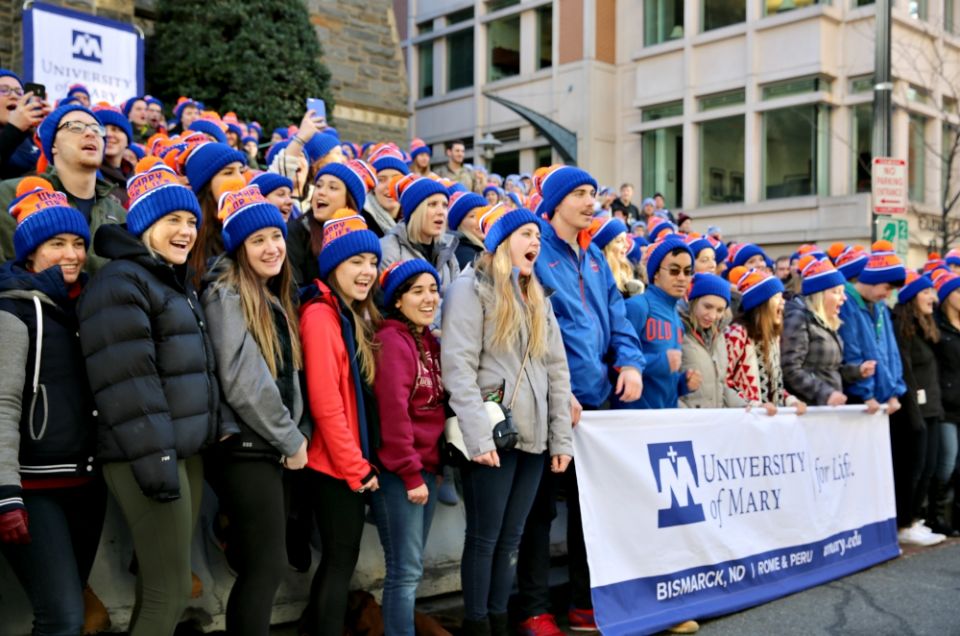 Students from the University of Mary in Bismarck, North Dakota, chant pro-life cheers Jan. 27, 2017, outside of St. Patrick's Catholic Church in Washington, D.C., as they prepare to participate in that year's March for Life. (CNS/Chaz Muth)

INDIANAPOLIS — The Lilly Endowment has made gifts up to $1 million to Catholic organizations, including two universities, as part of its new Thriving in Ministry Initiative.

One gift went to Catholic Theological Union in Chicago. According to a Feb. 13 press release, the gift "opens a path for the school to identify and address obstacles and stress points that keep those ministering in the Church from thriving in their work, particularly those who are within the first ten years of ministry."

Another went to the University of Notre Dame's McGrath Institute for Church Life, which, like Catholic Theological Union, received the maximum $1 million "to expand programs for ordained and lay pastoral leaders in a shifting ministry landscape," the university said in a Jan. 18 press release. The McGrath Institute "will expand its summer program for diocesan priests and initiate a program that supports the professional and pastoral leadership development of lay ministers early in their careers," the press release adds.

The Lilly Endowment started its new initiative to develop new programs or strengthen existing ones "that help pastors build relationships with experienced clergy who can serve as role models and exemplars and guide them through key leadership challenges at critical moments in their ministerial careers," according to its website. Catholic Extension and the Sisters of St. Benedict of Beech Grove, Indiana, also received grants.

BISMARK, NORTH DAKOTA — The University of Mary is bucking the current trend of struggling small private schools, according to a Feb. 12 press release.

The university, which currently enrolls about 3,300 students, had seen growth over the last few years but now appears to be on the verge of introducing a wait list for prospective students. This year has seen a 27 percent increase in the number of applications the university received, and a third more commitments from incoming first-year students.

"Keep in mind, what makes this so remarkable is that we are still seven months away from the start of the 2018 fall semester and enrollment is going at breakneck pace — we're booming," said director of undergraduate admissions Richard Hinton.

The university says it will honor all acceptances it has already issued, but suggests that students who may still be interested in attending apply soon before a waitlist becomes necessary.

WASHINGTON — According to a Feb. 9 report in Georgetown University student newspaper The Hoya, several hundred dollars in donations for controversial student group Love Saxa, including one of $250 from the group's president, did not end up in the group's account with the university. The university told The Hoya that the error was a result of Love Saxa not being properly entered into a system for distributing funds, and that the money would be returned.

Love Saxa, a group that supports conservative sexual ethics and is opposed to same-sex marriage, came under fire last fall, when LGBT activists opposed its funding from the university as a recognized student group. Love Saxa ultimately retained funding and recognition, but claims that the misappropriated funds went to LGBT groups opposed to its message, and that the university misappropriated the funds intentionally.

"Georgetown officials have funneled money intended for Love Saxa to its ideological opponents and those who partner with them," Tyson Langhofer of the Alliance Defending Freedom, a Christian organization that provides Love Saxa legal counsel, wrote to Georgetown president John DeGioia. "Of course, this has happened immediately after the recognition controversy, suggesting that Georgetown officials have found a more secretive way of expressing their animosity towards Love Saxa and of punishing the group for its traditional views."

Students from the university's Busch School of Business will be able to workshop with businesses in Mess Hall through the "Learning Lab," devising strategy in workshops and even getting to put some of their ideas into action.

"Strategy sessions are great, but all too often the best ideas can't come to fruition since business owners lack the bandwidth to execute," Mess Hall founder Al Goldberg told Washington Business Journal. "Our Learning Lab helps on both fronts by bringing Busch School mentors on site to assist with the overarching strategies and providing interns to help put ideas into action."

In an August 2017 video, Mess Hall founder Al Goldberg speaks about his participation in another program at Catholic University of America's Busch School of Business.

This Thanksgiving, taking two bites of everything

Hope is where we must dwell