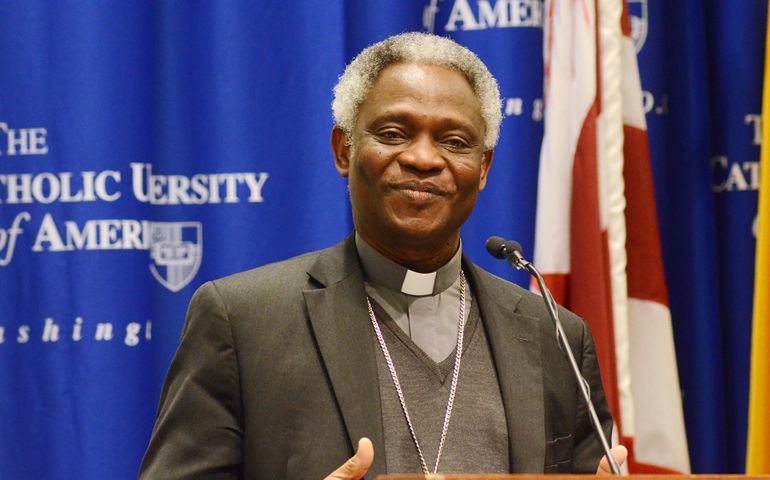 Cardinal Peter Turkson, president of the Pontifical Council for Justice and Peace, is seen March 17 in Washington. (CNS/courtesy The Catholic University of America)

Vatican City — Pope Francis is giving "very strong recognition" to a landmark conference held at the Vatican last spring that called on the global Catholic church to reject its long-held teachings on just war theory, Cardinal Peter Turkson has said.

Turkson, the head of the Vatican's Pontifical Council for Justice and Peace, said the pontiff's decision to focus his message for World Peace Day in 2017 on nonviolent strategies to prevent and stop global violence was partly caused by the discussions at the conference.

"He's adopted this topic … as the message of peace for next year," said Turkson, referring to Francis. "We are giving a very strong recognition to the conference and to the things that were discussed and said there."

The cardinal was speaking in an NCR interview Monday in response to a question about the April event, which was co-hosted by his council and the Catholic peace group Pax Christi International.

Turkson said the participants of the conference asked the church to re-examine the concept of just war, first enunciated by fourth-century bishop St. Augustine, and "slightly begin to move away from that."

He said that while just war teachings were first developed to make wars difficult or impossible to justify, they are now used more as conditions that allow violence to be used.

"My understanding is that it was initially meant to make it difficult to wage war because you needed to justify it," said the cardinal. "This now has been interpreted these days as a war is just when it is exercised in self-defense … or to put off an aggressor or to protect innocent people."

Turkson said the participants at the conference promoted "another thinking:" Gospel nonviolence, or "nonviolence as Jesus was nonviolent."

"People think that this is Utopian, but Jesus was that," said the cardinal, calling Jesus' instruction to his disciples to turn the other cheek if someone were to strike them as an example of "non-aggression" in response to violence.

"From the point of view of us Christians, and talking as Christians, our master also taught us a way of dealing with violence," said Turkson. "Is it worth following what our master taught us? What he taught us is this nonviolence."

The Vatican conference on just war theory was held April 11-13 and brought some 80 experts engaged in nonviolent struggles to Rome to discuss developing a new moral framework rejecting ethical justifications for war. At the end of the event the participants launched an appeal, bluntly stating: "There is no 'just war.'"

The Vatican announced in August that Francis' World Peace Day message for 2017, which will be officially promulgated on the first day of the year, will be given the title "Non-Violence: A Style of Politics for Peace."

Turkson, who spoke about the April event in the context of a 40-minute interview at his council's office in Rome's Trastevere neighborhood, also said that international responses to unjust aggression by nation-states or other actors do not always need to involve violence.

"There are several diplomatic means we can use to stop aggression," said the cardinal. "If nothing else at all, stop that with which people cause the aggression. Why don't you talk about curtailing arms trafficking? The really big instruments of war come from factories and industries which produce weapons and some of these weapons are now in these theatres of war."

As an example, Turkson spoke of the weapons used by the terrorist group Boko Haram in Nigeria, asking: "Who makes them available?"

"There are people making money on the trafficking of weapons," said the cardinal.

Developing a narrative of brotherhood

The office, to be called the Dicastery for Promoting Integral Human Development and coming into function Jan. 1, will combine the work of four pontifical councils, including the peace and justice council.

The cardinal said the reorganization of the pontifical councils is an opportunity to "develop a new narrative as it were of the church's response to the social situations of humanity."

He said the church particularly has a story to tell the world in the face of the continuing migrant crisis.

"I think the first thing we need to take up is the story of the brotherhood of humanity," said Turkson, referring to Pope Benedict XVI's 2009 encyclical Caritas in Veritate, which in one part examined globalization through the lens of fraternity.

"The only form that the existence of humanity takes is in the context of brotherhood," said the cardinal. "What Pope Benedict observed then was that globalization brings us together but it has not yet succeeded in making us brothers."

"It means that it has not fashioned within us the inner ethic of relating to one another as brothers," the cardinal continued. "That means recognizing ourselves as belonging one to the other."

Francis, Turkson said, is telling the world to be open to welcoming migrants and refugees because "they're your brothers."

Turkson said he was not offering some kind idealistic model of brotherhood.

"In a very real way, brotherhood first was betrayed," said the cardinal. "Cain killed Abel; refused [brotherhood], rejected it, tried to destroy it."

"There is still within us this problem of denying what God created us to be," said Turkson. "It's part of our history of salvation and redemption as Christians. That's why we say Jesus is the brother who has come to redeem brotherhood or humanity."

"This is our particular contribution to this whole narrative of brotherhood," he continued. "We Christians recognize the system which was God's plan for creating a human family and which was rejected by Cain at the beginning was redeemed by Christ, who's become the firstborn of many brothers."

"That invites us in Christ Jesus to refashion a new sense of brotherhood," said the cardinal. "And with that, we're hospitable, we receive, we identify with one another and everybody's concern becomes our concern. One death of a brother diminishes me because [it] is part of me dying."

Asked what concrete things the Vatican might do to change global political attitudes about welcoming migrants, the cardinal replied: "Let's learn to re-tell the story of our brotherhood, of human brotherhood."

"And when we learn to re-tell the story of our human brotherhood, certain values of this spring up immediately," he said. "A brother protects a brother. A brother sticks up for his brother. Everything [about] a brother concerns him."

Justice for neighbor and creation

Turkson also spoke about his efforts to promote Francis' 2015 ecological encyclical Laudato Si'. He said that in travels around the world to give talks on the encyclical he has noticed that it has had a "very positive impact" on people's thinking.

"Laudato Si' has made the rounds and has found a lot of resonance in people's hearts and people's messages and people's conduct and action," said the cardinal, calling it a "big stimulus" for the December 2015 Paris Agreement that saw 195* countries commit to reducing greenhouse gas emissions.

Turkson said the ecological crisis is tied to deeper problems within the depths of humanity.

"The sin that is in the hearts of people, that is what is playing out in the way we treat the environment," said the cardinal. "Human sinfulness underlies our abusive treatment of the environment. And for us Christians, this is not a terribly strange saying because, as Paul tells us, the world will be redeemed with us. Our own redemption is also the redemption of the world."

Asked about those who say the church should spend less time talking about climate change and more time talking about other moral issues such as abortion, Turkson said there is a tripartite relationship between God, humanity, and creation.

*Editor's note: This story has been updated to state the correct number of countries that committed to the Paris Agreement; as of Sept. 20, 181 countries have signed the agreement.

People | Cardinal Turkson: 'We do not stop war by starting another war'